Reunions now start at the cast members’ houses, apparently, and the only rule is “no eyeliner.” We see Dorit Kemsley at Kyle Richards’ place, Eileen Davidson at home, and Erika Girardi breaking the eyeliner rule in her surprisingly normal-sized kitchen. Lisa Rinna is already laying on the cray at home, saying she wants to know why Dorit called her “a pill popper, a drug addict, someone who’s addicted to Xanax.” Except Dorit didn’t call her any of those things, though the first one is – by Rinna’s own admission – 100 percent true. It’s gonna be a long reunion.

Nobody’s look is very remarkable, though Kyle picked the least flattering dress possible and keeps her arms crossed in front of her the entire time, obviously uncomfortable. Erika has taken the aim for perfection a bit too far on the facial front; she has no glow, just a very flat, matte, impossibly smooth face. It’s distracting, as is the absence of Eden Sassoon, who – while somehow not an official cast member – played an integral part in several storylines.

After too much NBCUniversal cross-network promotional talk of “Dancing with the Stars,” we finally get onto the reunion. It only took six minutes to get to the point of the show.

When asked about Dorit joking that Erika had never given her a compliment, Erika says, “There is a drop of truth in all kidding. That’s how you get away with shit.” Dorit says she was just trying to take the intensity out of their tension. Both of them are telling the truth.

Andy asks Erika about her comment in Hong Kong that Dorit “says boring shit” and that she herself “[says] important shit.” Erika finally cracks a smile and says Dorit talks a lot. She seems to expect Dorit to laugh with her as if she hasn’t been ice cold this whole time. Eileen is making a mean girl “I can barely stifle my laughter” face with her tongue out, staring down Dorit – who doesn’t seem to care and is smiling. When Lisa Vanderpump says that Dorit does talk a lot, Eileen, Rinna and Erika make a big show of cheering as if LVP has made some major admission. Dorit points out that they haven’t exactly discovered a big secret. “I’m one of those people who, what’s on my lung is on my tongue,” Dorit says. Erika rolls her eyes. I really hope these are just edits to make Erika, Eileen and Rinna look nastier than they are; if they’re not, these ladies are even more unkind than we saw during the season.

The Hong Kong ding-dong between Erika and Eileen is rehashed, and Eileen says that even though Erika didn’t apologize until they were back in the U.S., Erika let her borrow her glam squad for dinner the next night. Cue long, boring discussion about Erika’s police officer son. We get it, it’s not complicated. Then everyone puts Erika’s personality under the microscope again, discussing her reserved demeanor. Again, ‘CSI’-level analysis is not required: Erika is polite and friendly when she first meets people but doesn’t reveal herself quickly or easily. This is not bizarre or noteworthy.

In discussing how one might treat one’s children differently than one’s parents did, LVP admits her parents never told her they loved her (“That explains a lot,” everyone on the planet thinks). So she reacted by being very demonstrative with her kids. You can see LVP is just as careful about what she reveals about herself as Erika is – if not more so. Lisa is just better at getting people to come out of their shells by taking an active interest in them and asking lots of questions. She might be interested for nefarious reasons, or because she really enjoys getting to know people, but you can tell she genuinely wants to know details of who people are and why. Erika never shows that kind of curiosity about others, so she comes off as distant and uncaring.

During a retrospective of the Eileen/LVP/Rinna fight in Dubai and its aftershocks, I realize how much of what happened in the beginning of this season was totally forgettable. Everything was overshadowed by Pantygate, Xanaxgate, and utter Rinsanity. LVP says she shouldn’t have made the joke to Eileen about her husband being off in the corner with another woman at Dorit’s party. She confesses she hadn’t let go of her hurt over last season’s fights. LVP also admits she enjoyed raking Rinna over the coals during her Diamonds & Rosé party. Yeah, that was obvious…and understandable.

LVP says she enjoys Rinna a lot; like Kyle, she can be a good sport and a lot of fun. But she says Rinna also does things that make her want to strangle her. Join the club. Rinna is upset that Lisa reneged on her offer to move on. LVP points out that if Rinna hadn’t blown things up with Dorit in Hong Kong, there would have been no further issue. “She was devastated,” LVP says of Dorit’s response to Rinna’s allegations of an untrustworthy husband and drug abuse. “We were all devastated,” Erika says, then follows up with, “No one was more devastated than I was!” Honestly, this woman needs to get some real problems. I was totally on Erika’s side throughout Pantygate, but at a certain point, just dry your eyes with a $300,000 dress and pay your $40,000 a month glam squad to wipe away the tears. You just said you lose sleep every night, worrying about your son being killed in the line of duty, and this is where you choose to put your focus? That’s on you, Erika.

Rinna reminds LVP that the two of them shared “a powerful moment” and Vanderpump almost bursts into tears. Terry, a Vanderpump family friend and pilot who flew Lisa and Rinna to Ohio to get Ken’s ponies, recently died in a helicopter crash with his wife. When LVP reached out to Rinna to share the news, it was an occasion to bond. Vanderpump said it put everything into perspective for her, “but then I see the tape and I get pissed off.” Sharing a moment of sympathy with someone, no matter how powerful, doesn’t hit a big reset button in the sky, Rinna. It’s so gross to see her use this man’s death as a way to try to guilt LVP and score points. She’s still the worst.

I can’t believe I’m saying this, but turning the focus to Dorit next is a breath of fresh air. She admits that Boy George doesn’t exactly live with her and PK – “he lives with us when he’s in LA.” So he’s a houseguest. And as someone who made relentless fun of Dorit’s reliance on a full-time staff of nine to run her household and help with the kids, it’s even aggravating me to hear someone sent in a question about her having “too much help.” As if a mother can ever have such a thing, especially with no family nearby to babysit. Dorit explains that she and PK have a lot of events, many of which are in the evening, so she needs to have coverage on standby. Like it or not, she’s not lying: She makes her living, in part, by having a high profile. That means being out a lot. Unless you’re saying moms shouldn’t work outside the home, take several seats with your “too much help” criticisms. It’s funny to joke about her team, but if it genuinely upsets you, get a life.

Of course Dorit’s “accent” is discussed. She has an inflection, technically – not an accent. And certainly not a “British, Australian, South African” accent as Rinna stupidly claimed.

After a recap of all the Housewives’ conspicuous consumption, the only thing one can conclude is that money definitely doesn’t buy class, manners, or happiness. They all spend way too much time being sulky and mad. Yes, drama and theatrics are literally part of their job; misery isn’t. Erika admits she flies her glam squad business class to and from places like Hong Kong and Dubai. She says she learned from Tom that if you give people your best, they’ll give it back in service. So she’s happy to give them a lot of her husband’s money in order to look fabulous daily. Hard to argue with that!

Dorit’s husband PK joins the ladies, and I am unreasonably excited about it – just for the spectacle. His hair seems darker and fuller, and it looks like his shoes have a stacked heel to make him taller. PK admits that managing Boy George isn’t his main job, and he confesses to Andy that he used to have more money. Andy doesn’t mention all the gossip about PK’s financial skeletons. PK says, “I started in business in 1995, and I spent the first 25 years in real estate.” Well, that math doesn’t add up, but nobody mentions it.

PK says that, rewatching the show, he definitely got involved in the ladies’ fights at times when he shouldn’t. “More often than not, my input wasn’t much appreciated,” he realizes, saying Dorit is more than capable of handling herself without him white-knighting for her.

Next, a Pantygate rehash. I can’t be the only one who is totally bored by this topic. As embarrassed as Erika claims she is, she sure has managed to keep the conversation going for months on end.

PK apologizes for making fun of the brief glimpse he says he got of her genitals, and says he can’t believe they’re still talking about it. LVP points out that Erika is someone who wears a C-word pendant around her neck, so she was surprised that Erika couldn’t laugh at herself going commando. What no one mentions is that Erika said she was over it months ago, but she was being dishonest and has kept the topic of her vagina alive ever since. Will she admit this on the next installation of the reunion? We’re more likely to see her in pajama jeans than we are to see her take responsibility for her own reaction to Pantygate. 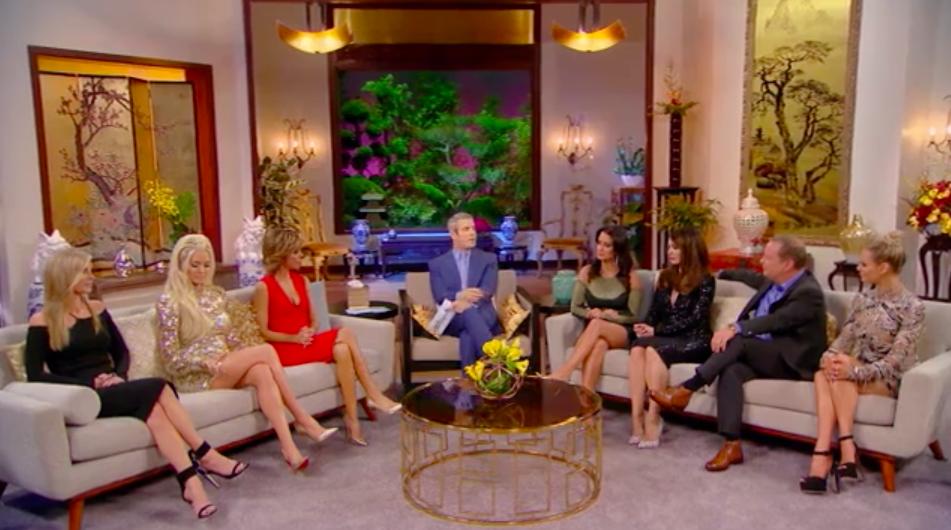