Finally, we’re almost done with this mess. There is so much deeply disturbing, nasty behavior in the third part of the reunion. No prizes for guessing who’s doing the bulk of it.

We start where we left off last week: Kyle urges Kim to go get Rinna, who stalked off backstage, and explain to her that she didn’t want her stuffed bunny because she’s superstitious. As if Rinna is a reasonable person. I’m reminded of a saying: “You don’t make them sane, they make you crazy.” These women need to stop trying to make Lisa Rinna sane.

Rinna rebuffs Kim and calls her “a sick woman,” saying Kim giving the bunny back is the most humiliating thing that’s ever happened to her. If that’s true, you’ve had a really good life, lady.

“Do you feel good about getting back at me?” Rinna asks Kim. She asks other people this question so much that I can only conclude she’s projecting. Rinna is constantly saying horrendous things to get revenge on others. It makes HER feel good to humiliate people. This is about Rinna’s emotional ugliness, no one else’s.

“I feel sorry for you,” Rinna spits at Kim, who tells her she should feel sorry for how she’s treated Kim. “You’re a victim and you’ll always be a victim,” Rinna snarls over her shoulder as she strides back onstage. Yeah, not buying the idea that she has any remorse whatsoever for everything she’s put Kim and her family through.

“Here’s the real Lisa,” Kim says as they return to the group. “There she is.” Yup.

Rinna keeps telling Kim she’s “mean” and pulls out an app that shouts “FUCK OFF” over and over when Rinna pushes a button. She keeps pushing the button. Very mature and sane.

After repeatedly calling Kim “a sick woman,” Rinna says, “You know, Kim, you just want to be on a show – and I’m your meal ticket.” Everyone’s jaws drop. Wait, wasn’t Kim one of the first cast members of this show seven years ago? Andy Cohen says as much.

Kim tells Rinna it’s the other way around: Rinna has been using Kim as a storyline for the past few years. She’s not wrong.

Kyle is disgusted with Rinna and tells her so. Rinna is unrepentant, of course. Kim points out that Rinna has talked about her non-stop and Kim isn’t even a Housewife anymore. Rinna vows she won’t be talking about Kim “ever again.” She doesn’t mean it.

“I take it on the chin, man. I take it on the chin for everyone.” Rinna actually said this, quickly followed by: “And I’m not a victim. I never play the victim – ever. I just take it.” Okay, she has lost complete touch with reality – if she ever had it.

Dorit points out, more gently than Rinna deserves, that the reason she’s always “taking it on the chin” is because she’s the one getting in the ring and starting fights. “I just speak my truth,” Rinna says. God, give me strength to watch the rest of this episode and not rage-punch the TV.

Kyle points out that saying something awful and damaging about someone, then saying “That’s my truth,” doesn’t make it okay. Rinna says she’s apologized “over and over.” She’s only had to apologize so much because she keeps doing the same messed up stuff. Press the learn button, Lipsa!

Speaking of her lips, Rinna starts playing the victim (which is odd, since she just told us she “never, ever” does that). She claims Kyle’s joke about her perhaps being physically incapable of closing her mouth and not saying messed up stuff was “so mean.” No it wasn’t – Rinna has made so much money trading off her lip issues. Cry me a river, victim.

Next, Rinna says something that was unfortunately cut short. With a “poor me” tone, she says something about how she must be “such a horrible person and I go around saying horrible things about…” Everyone but Eileen and Erika? Yes.

Kim accuses Eden Sassoon of going after her to create a storyline for herself. This claim has no credibility whatsoever. Eden might lack boundaries and be clingy, but she is pretty transparent. She admits she projected her past experience with her late sister onto Kyle, and Kyle says it was understandable that Eden would do that. Finally, a moment of sanity on this show. But it doesn’t last long enough.

Next, we get a flashback of Kyle and Kim’s previous noses. Andy plays the clip from the finale of season one, where Kyle references how much she and Mauricio do for Kim financially. He asks if that is enabling her alcoholism. Kyle is flummoxed, and it seems very unfair that she would be cuffed for something she did seven years ago. Kim’s situation and their response to it has changed considerably in that time. Kim is sober now. Why go there?

Cue another rehash about whether Rinna was lying about not remembering how she slandered Kim and Kyle. Nobody believes she was being truthful. But Erika says, “I don’t know, and I don’t care.” In the middle of this, Rinna tells Dorit, “I’m done talking to you now. Thanks so much. Bye-bye,” and keeps talking over her, repeating the same dismissive, childish lines. How does this person have any fans? It makes no sense at all.

Eileen is very vocal in standing up for Rinna. Of course. Eileen knows she has zero storyline except for her partnership with Rinna. Eileen has a nice, calm life – which doesn’t make for good reality TV. Rinsanity is all she has to stay relevant.

Next, Eileen attacks Kim and says, in the most condescending manner possible, “Just because you’re the loudest and most obnoxious does not mean you’re right.” I didn’t think she had it in her to be this vile, but looks like Eileen has picked up a thing or two from Rinna.

Less than a minute later, Eileen again says to Kim, “Just because you’re obnoxious doesn’t mean you’re right.” She was determined to get that insult into the final edit of this reunion, so she said it twice? Charming.

Eden very astutely points out that Kim inserted herself into the conflict between Dorit, Rinna and Eileen at game night, then got angry at Eden for speaking up to try to calm them all down. Kim doesn’t respond.

For her next kooky claim, Rinna swears she hasn’t said a word about Kim for the past six months. As if none of us saw what went down at Vanderpump’s party in the last two episodes.

My tolerance for how this has become the Rinna Reunion is wearing thin. Next, we have to go over Smoothiegate again. We see the conversation between Dorit and Eden, which confirms Dorit never asked or asserted anything about Rinna being a “Xanax addict.” Do you think Rinna apologizes for accusing her of that, over and over, and starting rumors about Dorit’s dinner party being awash in cocaine? Of course not. Instead, she says Dorit “just kept talking about it.” Again, not true, and Dorit stands up for herself very well. Rinna says, “You make me crazy! You make my head crazy!” No, you came pre-loaded with crazy.

For some unfathomable reason, Erika is taking Rinna’s side here. Huh?

Dorit points out that Rinna asking her on-camera if people were doing coke at her dinner party – without having seen a speck of cocaine or anyone doing anything but leave the table at the end of the meal – was a deliberate attempt to defame Dorit and hurt her. Rinna, for once, has nothing to say. She knows it’s true and so does everyone who’s been paying attention.

Rinna says everything she’s said and done over the past season has been 100 percent her – no influence of alcohol or drugs. So she really has no excuse for doing such horrible things, and finds that a point of pride. No remorse at all. You know, there’s a diagnosis for that.

Next, Eileen picks a fight with Kim. She asks why Kim always refers to the fact that she and Rinna are soap actresses. Kim says she thinks acting on soaps calls for a higher level of theatricality than acting in movies. This is objective fact, otherwise referring to something as a “soap opera” wouldn’t be shorthand for dramatic behavior and circumstances. Eileen disagrees and gets outrageously defensive. “This is not a movie,” Kim says. “It’s real life.” In response, Eileen says, “Okay. DONE. Bye-bye!” in the most immature, hateful way you can imagine. She keeps sarcastically repeating, “Yes, Kim,” and then says “Bye!” again. That’s Rinna’s cue to jump in and start saying, “Buh-bye, Kim! Buh-bye, Kim! Bye!” over and over. It is every bit as ridiculous and abhorrent as it sounds.

As Kim is saying her final words before leaving the stage, Rinna utters, “That’s such fucking bullshit.” She jumps up and walks off-stage, cackling and saying, “I need a drink – and a Xanax! Gimme a drink and a Xanax!” while dancing. Totally sane.

Now for something lighter: Dog torture!

I’m glad Lisa has taken this on as her “life’s work,” because it is surely the most noble thing she could ever do besides being a mom. Andy asks Lisa what’s going on with Max’s search for his birth mother. She gets very emotional but says they found her. Max told Lisa he’d like to meet his birth mother so he can thank her for giving him up for adoption so Lisa dn Ken could give him a great life. He was beyond grateful to them for the gift of his condo and didn’t feel entitled to it at all, as is clear from the reveal video we get to see.

Cue lots of filler about Lisa’s pets. Sorry, I don’t care. Ditto regarding the next topic: Lisa Rinna’s home life. She’s so despicable that I can’t find any of it cute. Her daughters are beautiful and funny, though. We do find out that Gigi Hadid was exceedingly lovely to Delilah when they were both in the Tommy Hilfiger show, and that Gigi is just a great girl. “That’s all Yolanda, man,” says Erika, who reveals she just saw Yo and that she’s not dating.

Will any of us be able to watch another round of Rinna using her mouth like a wrecking ball on other people’s lives? Well, she swears she’s never going to speak about Kim ever again. And if you believe that, you’ll believe Kyle when she says that all of the women on the show are “really good people.”

With that we are done. It’s been real, it’s been fun, but mostly it’s been gross and stupid. See you next season! 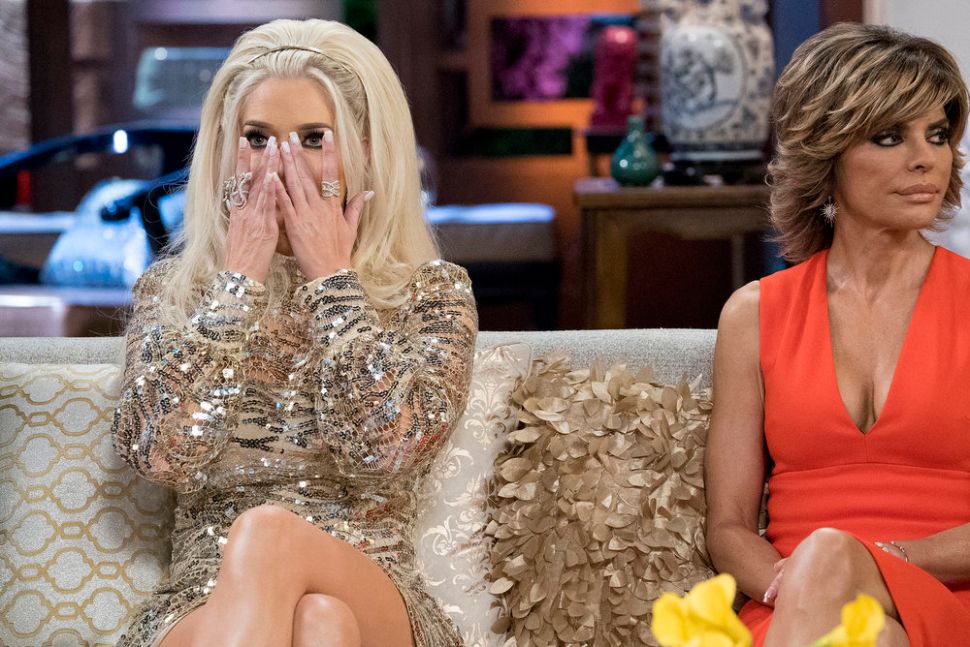