According to Real Housewife canon, all conflicts must be fought at a sit-down dinner party. This is true across all franchises, from Teresa’s table flip in New Jersey to the electric cigarette-smoking and shit-stirrer clairvoyant at Camille Grammar’s house in Beverly Hills. And so, true to form, Dorinda did not take Sonja aside to lash out at her, she did not wait until the evening was over, she simply went off as soon as the first course was served at Ramona’s Hamptons dinner party.

It was an intimate dinner party, with a delicious-looking spread that was allegedly cooked by Ramona (nobody believed her). They all took their seats and, in what was clearly a calculated move on Ramona’s part, Sonja was placed merely a seat away from Dorinda. Because Ramona planned to sit between them, it seems likely that Ramona wanted to play peacemaker – one of her favorite things to do of all time since it makes her seem likable.

But unfortunately for Ramona, Dorinda wasn’t interested in waiting for Ramona to sit down and take her seat to destroy her enemy. Instead, after Sonja complimented and exchanged niceties with Dorinda, Dorinda went in for the kill.

She slut-shamed Sonja, saying that instead of vaginal rejuvenation, she should just insert an E-Z Pass in there. She tells her to “shut her mouth,” demeans her off-Broadway show as being disgusting and gross (she never saw it).

Dorinda is a staunch feminist, an independent woman. So this patriarchal put-down seems beneath her. Especially because this is why I love Sonja – floozy boozy (well, not so much boozy) Sonja is the best kind of Sonja. Later on in the episode, we find out about her new much-younger French lover (dubbed “Frenchie”) as she washes her vast collection of lacy lingerie in her bidet. And it’s fun to see her thrive in her role of cougar-in-chief. For Dorinda to put down this side of Sonja simply because she’s pissed is cruel, even evil.

Finally, Ramona waltzed in and sat down in between Dorinda and Sonja as her friend Glenn tried to smooth things over. Poor Glenn – he tried, unsuccessfully, to steer the conversation away from this uncomfortable, distasteful topic by thanking Ramona for hosting.

But Dorinda is not done. Far from it. As soon as Carole mentions that the election would be next week, Dorinda used that topic as a tool to hurt Sonja, insinuating that not only does Sonja not know about the election, but that she was a consultant for Trump. Which is unfair since she had consulted for his hotels as part of her “international lifestyle brand.” In 1993.

Of course, the benefit of this insinuation is that it made Carole – level-headed, cool-cat Carole, immediately take Dorinda’s side. Because Carole is on the hardcore anti-Trump train, any association with this despicable human, even if it happened back when he was a part of the tony New York scene, constitutes as an unforgivable act of moral turpitude.

It explains why, as Dorinda stormed away from the table, she defended Dorinda acting like a rabid dog. After Tinsley tried to defend Sonja, saying that both Dorinda and Sonja are clearly hurt, Carole shuts that down. Carole claimed that Sonja wasn’t hurt, she merely wasn’t invited to the Berkshires and that’s not a big deal. And although she’s right, it dismisses that fact that Sonja hates feeling left out. And Sonja being disinvited from Dorinda’s place in the Berkshires made Sonja feel abandoned, unwanted and alone.

Dorinda’s rant reveals an ugly side to Dorinda that’s become more and more pronounced as the seasons pass. Dorinda doesn’t just get angry, she gets spiteful. It’s almost as if she’s embodying some distant relative who was a member of the Italian mafia. Her body language takes a turn for the dramatic, like an affectation of mustache-twirling thug: she swaggers, she lip-smacks, she constructs colorful language that will later be used in previews and sneak-peek commercials. And I get this sense that she fully enjoy this villainous role, that she thrives on this kind of drama. Especially because the next day, at Luann’s brunch, she does not regret her outburst in the slightest.

As the drama continued, as Dorinda leaned over to yell in Sonja’s ear about how she’s a fraud, Bethenny pulled up in her SUV to pick up Carole. Hearing the commotion, she called Carole, wanting to hear the drama going down without actually having to be involved in it. Even though she provided an escape for Carole, Carole was not done starting her own drama. She needed 10 minutes to tell Ramona that she should probably not come to her election party.

Now Ramona, like Sonja, hates being excluded from parties she feels she has a right to go to. And so when Carole told her that it’s better that she not go, she was insulted, claiming that she was being “disinvited.” Carole, however, was merely taking a page from Ramona’s playbook, when she disinvited Sonja from staying at her house and calling it a “change of plans,” (which Bravo helpfully reminded us by showing us a flashback to her telling Carole this).

And though she claimed otherwise, the truth is that Carole only wants Hillary fans at her party. Even though Ramona said she would not be voting for Trump (in fact, she didn’t want to vote at all), Ramona not liking Hillary is sacrilegious and blasphemous to someone like Carole, who has elevated Hillary into the divine prophet.

After injecting her own dramatic confrontation into Ramona’s dinner party from hell, she bolted. She jumped into Bethenny’s idling SUV as Ramona brought out a birthday cake, ostensibly for Bethenny since it was her birthday month. And as Bethenny and Carole drove away, Ramona sang happy birthday to anyone – to Tinsley, to Sonja, to herself, and, finally, to Bethenny.  And as she said Bethenny’s name, she lifted the cake up in the air like she was offering a sacrifice to the gods of chaos.

And it’s interesting to see these kinds of moments which show how perceptive Sonja can be. Instead of being angry at the hurtful things Dorinda said, she lets it go. She knew Dorinda had to vent, to get that off her chest. And she knew that once that’s on the table, Dorinda and she can move on. With Luann, she just needed to kiss up to her, complimenting her renovation, claiming she’s happy for her. Luann just needed to see genuine love and apologetic sentiment, which Sonja can easily express since she really does genuinely care for Luann, even if she’s pissed about Tom. But Luann is skeptical. And as those conflicts get wrapped up nicely in a bow of hugs, Ramona and Tinsley toast to a job well done.

But we are beginning to see why Tinsley was brought on in the first place, as she shows her first signs of being a backstabbing schemer. After the dinner from hell, Tinsley realized that being Sonja’s friend is a bit of a liability. And although she was loyal and tried to stand up for her as the chaos went down, she knew that she wanted more. She had narrowed down who was important to be friends with to increase her longevity on this show: the unlikable duo Luann and Dorinda. And so she goes out to eat with them, not telling Sonja or bothering to invite her along. When Sonja found out, she was livid: she hates being left out. And as she complained to her butler/intern Conner about it, Tinsley overheard and confronts Sonja.

It seems that being a guest in chateau Grey Gardens is not all it’s cracked up to be. The problem is that Sonja uses her houseguests to fill a void in her life. She’s lonely, her daughter is off in boarding school, and she has a revolving door of men to keep her occupied. But she craves companionship, she craves love. She wants to feel needed. And when Luann lived with her, it filled her with purpose, allowing her to be there for Luann when she was homeless and alone. As soon as Luann found her man, she tossed Sonja aside like she was last season’s Prada. So she needed someone new to feel needed and invited Tinsley to live with her. But to live with someone who is needy like Sonja can be, over an extended period of time, feel stifling and confining. And for Tinsley, who wants so badly to reconnect to her old life in any way possible by making friends, dating rich men and going to parties, she is beginning to see that maybe aligning herself with Sonja at the start wasn’t the smartest decision. 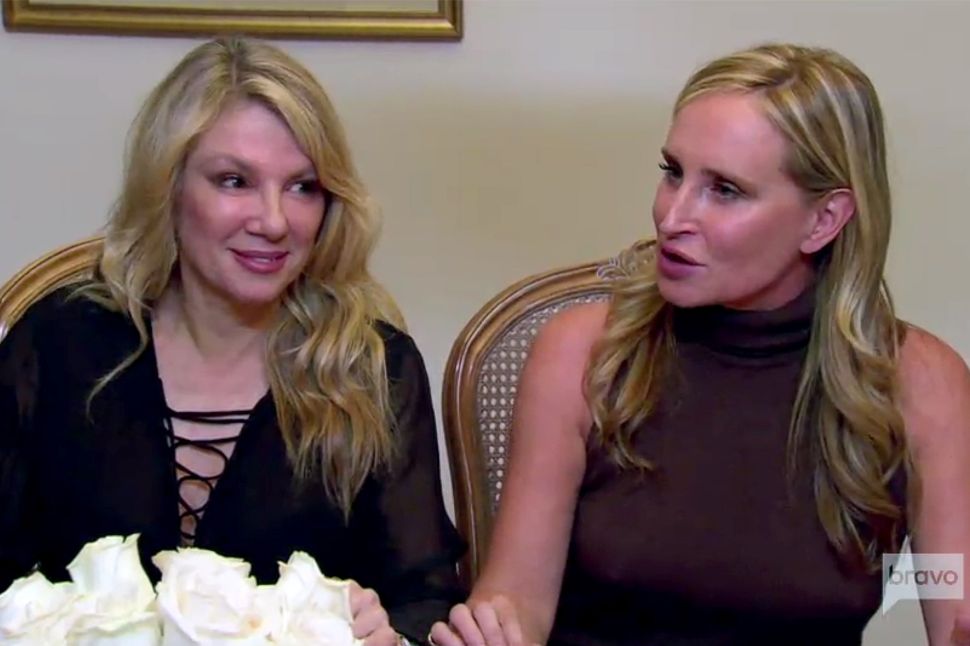