Something strange and wonderful happened at the Metropolitan Opera Thursday night. The theater was full. That’s surprising, since so far this season—despite programming of generally lofty artistic standards—ticket sales have been consistently soft.

So what’s motivating the public to beat down the Met’s doors? The answer is simple: Anna Netrebko. The diva, one of the opera world’s current handful of true box office stars, returned to the role of Tatiana in Tchaikovsky’s Eugene Onegin for the first time here since 2013. Judging by the public’s roaring ovation at her curtain call, it’s been way too long a wait.

Strictly speaking, this part shouldn’t really suit her: the character is painfully shy, the opposite of Netrebko’s own vivacious personality; further, the music mostly stays in the low and middle registers of the voice, only one or twice soaring to the brilliant top notes that are this soprano’s glory.

And yet, Tatiana has developed into one of Netrebko’s very best roles, rich in light and shade of acting detail and showing off a warm, calm radiance in the voice. So much of opera thrives on sin, but in this opera—in which her character honors her marriage vows despite her love for another man—the soprano made a moving case for virtue.

The centerpiece of the opera is a long aria for Tatiana in which she composes a letter declaring her love for the sophisticated Onegin, whom she has only just met. Tchaikovsky’s music depicts a range of emotion from self-doubt to ecstasy, and Netrebko was so gorgeously committed to the truth of the scene that it was easy to overlook the sheer beauty of her singing. Particularly delicious was her use of a firm mezzo-piano dynamic, perfectly audible throughout the theater and yet feeling as intimate as a whisper.

Netrebko has always been known as much for her acting as her singing, but in this performance she has filled out her portrayal with sensitive detail. In the last act, years after Onegin has rejected her, Tatiana has grown into a grande dame, sweeping majestically into her ballroom in an opulent garnet velvet gown. At her first glimpse of the uninvited Onegin, though, the soprano seemed to recoil, but only in the subtlest way, a slight stiffening of her posture… all that high society’s etiquette could allow.

Happily, the rest of the production played up to Netrebko’s excellence. As Onegin, baritone Mariusz Kwiecien was in fresh, fluid voice and, in contrast to his performance in 2013, played the part in a warmer and more relaxed manner. Instead of a prig, he seemed like a basically benevolent guy who just couldn’t get in touch with his feelings.

Elena Maximova succeeded in the difficult task of making her character of Olga prettier and more lively than her “plain” sister Netrebko, chiefly through her luscious mezzo. She overshadowed Alexey Dolgov as Olga’s ill-fated fiancé Lensky: his reedy tenor sounded musical but lacking in color. Similarly, Stefan Kocán’s bass was a little plain for the sumptuous phrases of Prince Gremin’s aria about his love for Tatiana.

Almost as important as Netrebko to the success of this Onegin was conductor Robin Ticciati. The brisk tempos and ravishing transparent textures he drew from the Met orchestra emphasized that this is a tragedy about young people: the main characters are all teenagers or in their early 20s. That so many people’s lives could be ruined by one ill-considered letter written by a young girl reminds us just how shockingly fragile happiness can be.

On Saturday night, a very different opera proposed exactly the opposite of that idea. Janacek’s fantasy-comedy The Adventures of Vixen Sharp-Ears heartbreakingly depicts the killing of the title character, a wily female fox, by a hunter. In the following scene, though, we see her daughter, full of life and unafraid, beginning her own set of adventures. Death, then, is only a detail in the larger picture that is Life.

This piece is particularly moving when, as it was at Manhattan School of Music, it is performed by young singers just setting out on new careers. And they seemed even younger in Dona D. Vaughn’s adorable production, presented as a children’s play, in costumes and sets that (deliberately) looked homemade.

This approach, however, did not downplay the satire of the piece, in particular the Vixen’s charming amorality. (She engages a coop of “exploited” chickens in feminist discourse, then, once they’re off guard, gobbles them up.) In this tricky and wide-ranging role, Heeso Son was in every way a delight, from her sweet lyric soprano to her innocently sexy body language. I loved the way she glanced back at the audience after slaughtering the poultry, as if to say, “I’m a fox. What did you think I was going to do?”

The entire cast, and they were quite a stageful, deserve kudos for their precise, unforced singing and easy, natural diction. (The work was performed in English translation.) A standout was Christian Thurston in the small but vital role of the poacher Haraschta, his rich baritone sounding more than ready for prime time.

With singers like Thurston and Heeso Son currently on the cusp, it’s easy to feel optimistic about the future of opera. In fact, in the not too distant future, they may be rivaling Anna Netrebko at the box office. 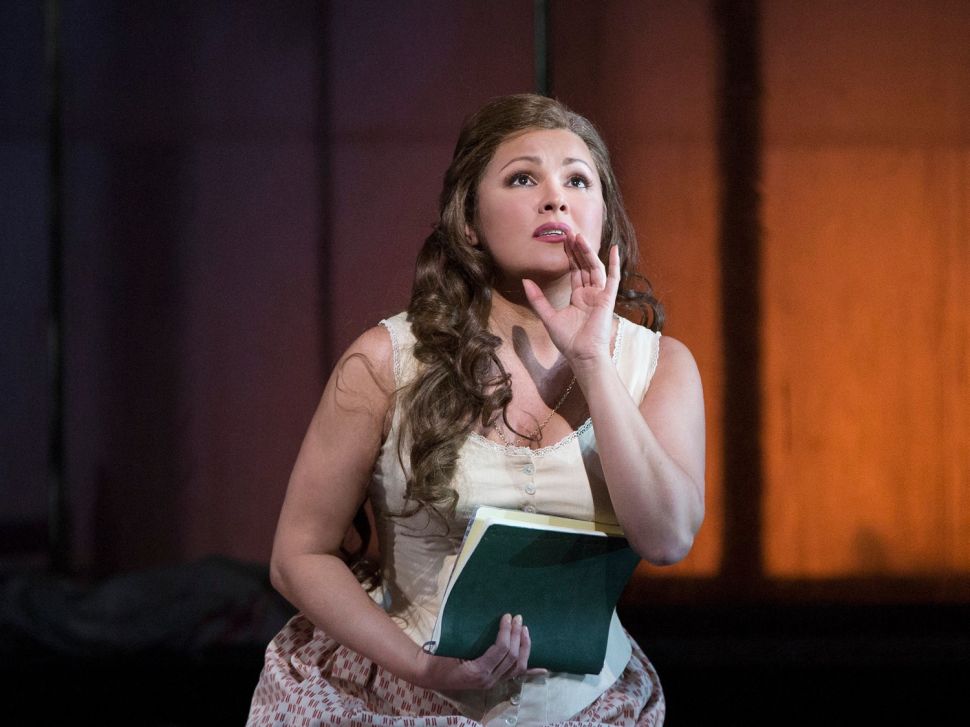