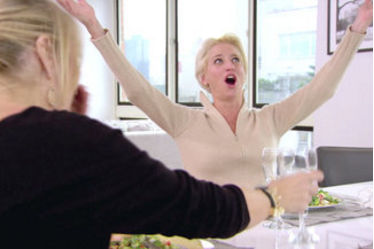 I was wrong. You heard me: I was wrong. The Countess is actually getting married. I thought pigs would fly, Housewives would be less dramatic, and Donald Trump would become President before the Countess would actually settle down and trade her title – her precious, identity-defining title – for a commoner’s “Mrs.” prefix. Well, Trump did become President, and the Countess is getting married, and I can’t wrap my head around any of it.

Well, that’s probably because I am just as bad as Carole at predicting things. Carole has come into this season a bit like the female version of a MRA activist living in his mom’s basement: the cat lady with too much time on her hands. Her home has become, as she tells us, a “petting zoo,” with two cats joining her dog Baby. She is also addicted to the election season, which is a side-effect for anyone who spends all day watching CNN and MSNBC like their life depended on it. Another side-effect is beginning to sound like the political commentators and pundits and predictors who yell over each other on the cable news beat.

So when Carole visits Bethenny, ostensibly to meet Bethenny’s adorable new puppies – Biggie and Smalls – Carole can’t stop herself from talking about her favorite subject: the election. “I won’t talk about it,” she promises Bethenny. So, naturally, she talks about it. She’s obsessed: she’s analyzing, she’s tweeting, she’s predicting. Why? Because, as she tells us, “once a journalist, always a journalist.” But I don’t buy it. Her obsessing over it, especially on television, speaks to Carole’s personal brand of narcissism: her intelligence. Even as Carole hasn’t explicitly stated as much, she does think she is the most intelligent woman on this show, aside from perhaps Bethenny and Dorinda when she’s not drunk.

Carole’s superiority complex in this matter came out a few seasons ago, when Aviva accused Carole of using a ghostwriter. And Carole, seemingly uncharacteristically, yelled and belittled and generally wreaked havoc. Carole is pro-Hillary, and believes that Hillary is of course a shoe-in. As the election plays out, and, as we all know, Hillary shockingly loses the election, I think we’ll see her unravel a bit.

Poor Bethenny had to hide her head in a cupboard as Carole continued to drone on, evolving into a CNN election-special cable show. But, at least financially, things are looking up for our SkinnyGirl: she is selling her Tribeca apartment that her ex was squatting in as he he squeezed her for every last dime she had during their ridiculously long divorce.

Selling an apartment? It’s Bravo crossover time! Frederick from Million Dollar Listing: New York is back and he’s here to sell Bethenny’s Tribeca “flophouse,” aka her former dream. Hee ex left it in “shambles”: furniture ripped, grimy floors and walls. But Frederick is a magic-man and “staged” the apartment to sell. Frederick, having amazing taste, made it look like money. Obviously, it sold in a day, full cash, and at a record price. Because it’s Frederick.

As for the Countess, who I shall henceforth term the Mrs., she is as giddy and as self-absorbed as a high school girl in love. She is getting married and, shocker, no one is invited except for her favorite mole and sycophant: Dorinda. The Mrs. explains that she only wants people there who love her and want what’s best for her and who will guarantee that they won’t bring drama. For the real world, that’s a very normal thing to want. But this is Real Housewives land: the more drama, the more guaranteed camera time. And every single one of these women want one thing, and one thing only: to be on camera all day, every day. So why do all these women aspire to have no drama at their events? Isn’t that the point?

Dorinda, who enjoys flattering the Mrs., is angling for a redemption season, but already she’s off to a rocky start: her relationship with Sonja is on the rocks. She doesn’t even want to hear her name. Which is weird, since they were besties last season. I mean, sure, there were cracks on the surface: Dorinda was condescending to Sonja, Dorinda refused to listen to Sonja or sympathize with Sonja’s feelings. Dorinda preferred to suck up to the bigger, more powerful personalities in the group like Bethenny and the Mrs. It allows her to be seen as the peacemaker, as the supposed “bridge-builder.”

But Dorinda did want to make sure she re-aligned herself with Carole, and so she essentially begged and cried for forgiveness for her behavior towards Carole. And while it’s great that Dorinda can let go of the past, and she has the capacity to actually forgive (instead of the “I forgive but never forget” idiocy these women seem to live by). But she also knows that having Carole as an enemy is futile because she’s a fan favorite (her tagline does claim she wins the popular vote).

And although Dorinda and Sonja are on the outs, Sonja doesn’t seem too distraught over it. Sonja has been cast in an off-Broadway play, she pads about her house and happily washes her sex toys in her dishwasher, and she also has seemingly become less of a hoarder as she donates her clothes to Dress For Success. Bethenny is an ambassador for Dress For Success, and so visits Sonja’s corroding Grey Gardens townhouse to collect the clothes.

Her clothes, unsurprisingly, are a mixture of boring, unfashionable Gucci loafers, silk short-shorts, and glittering Bob Mackie. As she stands amidst the glamorous clutter, she tells Bethenny how she was of course invited to Luann’s wedding, but had jet-setting plans to go to Phuket, Thailand.

Bethenny, in her talking head, knows the actual truth: no one is going to the wedding because of Tom’s penis. And that’s the bottom line.

But anyway, back to Dorinda. Because Dorinda with Ramona is the kind of Dorinda I like, especially when Ramona admits to enjoying Slimy Johhny at a recent event. Ramona is the kind of person whose insane personality forces people to be their best or worst self. With Ramona, Dorinda can fall into her “voice-of-reason” role, able to help Ramna talk out Ramona’s problem with Luann, prepping Ramona for her and Luann’s stereotypical lunch confrontation.

The lunch, of course, was a failure. When the Mrs. gets presented with information that’s negative, her go-to tactic is to find something wrong with the way the information was culled: she’ll claim that the person called people late at night, and was stalking around for information. Did Ramona do that? Maybe. But Ramona denies it, claiming, “people call me.” Both situations seem plausible, but it doesn’t matter: the Mrs. doesn’t care about the truth or about her fiance’s alleged philandering. She’s so in love with the idea of marriage, the idea of being with a guy of means, who has a life she wants and can provide her with the lifestyle she feels she deserves.

Ramona, in a brief moment of clear brilliance, says it plainly: just admit you don’t care. That it doesn’t bother you that he cheats. Obviously that’s the case. The Mrs. is so willing to prove everyone (myself included) wrong that she only cares about her Countess title, that she has found a new title to be obsessed with: the title of wife. And nothing and nobody and no truth will stop her from achieving her goal.

We get to see the Mrs. prance about Tom’s luxurious penthouse like the lady of the manor. Her giddiness – whether prompted by Tom’s charming personality or his “happens to have a penthouse apartment”-self, the Mrs. seems content as she looks out over the terrace onto the city skyline. She lounges on the couch as she plan her “fairytale wedding,” which she didn’t get to have the first time around with the Count. Now she’s looking forward to being “Mrs. D’Agostino.” – filed under words I’d never thought I’d hear the Mrs. say.

Truthfully, I am happy for her. But let’s be honest: the Mrs. doesn’t fall in love with people, she falls in love with things: titles, luxuries, money. And even though she’ll be stripped of her pseudo-aristocratic title, she’ll replace it with a new one that will continue to give her a reason to be smug and stuck-up. This is Luann, after all. 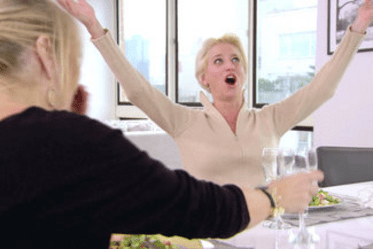