Women’s rights advocates and elected officials invoked Rihanna in their call for equal pay and workplace treatment on the steps of City Hall, urging employers to “pay me what you owe me”—and create a “level playing field” with their male counterparts.

She added that she would “raise hell” if she found out that Councilmen Ydanis Rodriguez and Jumaane Williams, in attendance at the event, “were making more money than me.”

“From City Hall to Capitol Hill, we are here to finish what they started, demanding women’s economic equality,” Cumbo said. “And as pop icon Rihanna said it best, pay me what you owe me!”

Cumbo emphasized the national resonance of the legislation.

“D.C., we are coming for you,” Cumbo said. “Donald Trump, we wanna let you know…we are organized, we are united and we are wearing red and we are gonna be coming to Washington, D.C. to fight for women all across this nation.”

“Not red like in Russia,” James clarified, eliciting laughter from the crowd.

The Public Advocate alluded to her legislation that would ban employers from asking job applicants about their salary history, which she predicted at a roundtable last week with former first daughter Chelsea Clinton the City Council will pass tomorrow. James said the bill gives women “something to celebrate” on this year’s Equal Pay Day.

Still, she stressed that the work does not stop there: that she and others in attendance called for ensuring predictable scheduling for workers, ensuring the minimum wage for tipped workers, expanding women’s entry to the trades and an end to workplace discrimination. James argued that equal pay will boost families and local businesses.

Roberta Reardon, commissioner of the state’s Department of Labor, noted that in November 2015, Gov. Andrew Cuomo signed the Women’s Equality Act—a group of bills offering protections to women—as well as a paid family leave policy in 2016.

She also cited two of the governor’s recent executive orders: one of which prohibits state entities from assessing job applicants based on previous wage history, and another which requires state contractors to disclose the gender, race, ethnicity and salary of all employees to provide transparency and advance wage equality.

“He [Cuomo] is a true support of women’s equal rights,” Reardon said. “We have had personal conversations about it.”

Venus Williams, a member of CWA Local 1180, told the Observer that James’ salary history ban legislation is the “best thing that’s ever happened to us as women.” The union also sued the city in December after administrative employees discovered that they were substantially underpaid.

“I’m very happy,” Williams said, on how she’s feeling on Equal Pay Day. “We’re finally being heard after all this time. I am so happy. I don’t even know how to express it.”

Carmelyn Malalis, chairwoman and commissioner of the New York City Commission on Human Rights, praised Mayor Bill de Blasio for appointing women to roughly half of the leadership posts in his administration. She also spoke out against sexual harassment of women on the job, and also stressed the need to combat employment discrimination against people who are caring for elderly parents or children at home, and to stop “sex stereotyping in the workplace.” 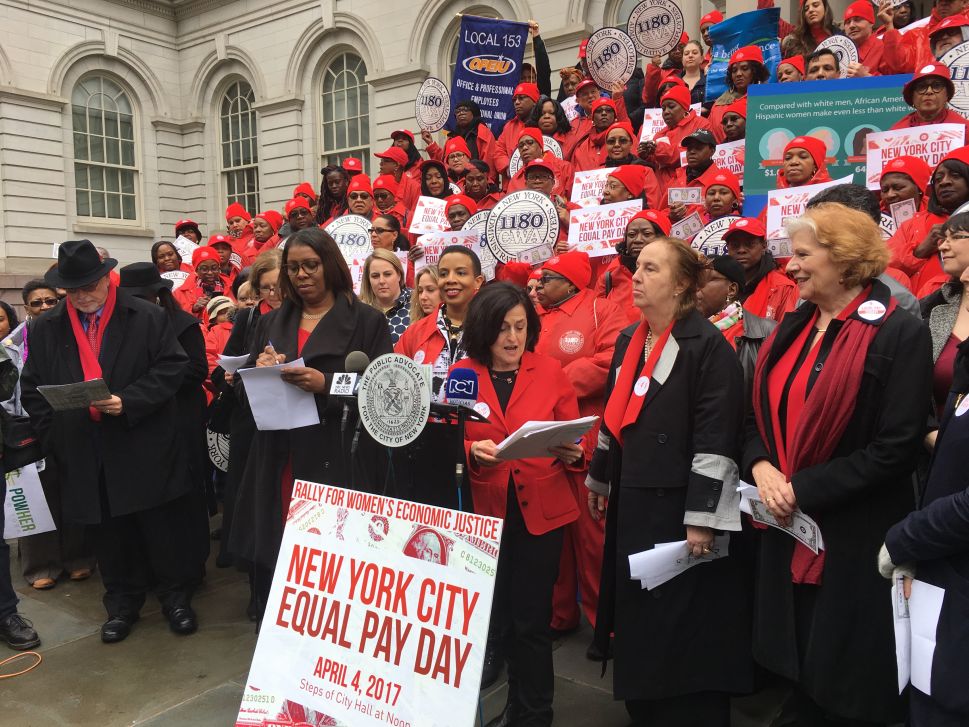