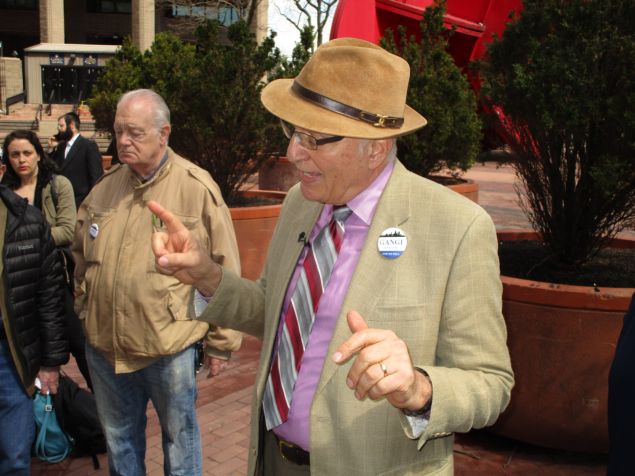 Activist Robert Gangi wore a khaki suit with a purple shirt and sneakers to the kickoff of his longshot challenge to Mayor Bill de Blasio this afternoon out front of One Police Plaza.

The 73-year-old needed aides to repeatedly adjust his microphone, forgot one of the four criminal charges he would reduce to a civil offense and had his phone burst into a song by The Weeknd midway through the press conference. He introduced two undergraduate students from Hunter College as his top political operatives.

And he declared his ambitions to crack the mayor’s base of African-American and Latino voters in the Democratic primary with an ultra-liberal message and the $40,000 currently in his campaign account.

(The mayor has repeatedly emphasized that the state controls the City University of New York and the Metropolitan Transportation Authority, and insisted it should fall upon Albany to provide subsidies.)

Gangi thus became the latest in a strange parade of characters who have announced their hopes of deposing de Blasio this fall, a group that currently includes more conservative Democrats like Queens State Senator Tony Avella and retired Brooklyn Councilman Sal Albanese. Polls show the incumbent with anemic approval ratings among the general public, but resoundingly strong support among the liberals and minorities who make up a disproportionate cross-section of the Democratic primary electorate.

On the opposite side of the aisle, real estate executive Paul Massey and Jets lineman-turned-minister Rev. Michel Faulkner have already launched their own quixotic bids, while eccentric supermarket mogul John Catsimatidis has hinted for months he will enter the Republican race. Former NYPD cop, Fox News pundit and radio personality Bo Dietl has is running on his own “NYC Cares” line after failing to properly check off the “Democrat” box when he changed his voter registration from Long Island.

In the absence of a heavyweight challenger like Comptroller Scott Stringer, Bronx Borough President Ruben Diaz Jr. or former City Council Speaker Christine Quinn, these are the only rivals the mayor can expect this year to call him out on his record as he seeks another four year term in office—a record that comprises repeated reports on the mismanagement of city agencies, a massive NYPD bribery scandal, a swelling homelessness crisis, admissions that he had a high-power real estate consultant sit in on housing policy meetings and a pair of now-closed probes that determined he rendered public favors to high-dollar political contributors and sought to circumvent state campaign finance laws (though neither resulted in charges).

Gangi, who has spent decades leading social justice groups like the Police Reform Organizing Project and the Correctional Association, matched de Blasio’s plan to close the Rikers Island jail complex—then raised his bet by saying he would do it without the mayor’s corollary proposal to build new, smaller holding facilities around the boroughs, arguing that the elimination of quality-of-life policing would massively deflate the inmate population. He pledged to hew billions from the police department budget to finance social programs for the indigent, and promised to construct even cheaper and more plentiful housing than de Blasio has overseen.

“We’re a longshot,” he admitted to reporters. “It might be tough, but we’re going to go at it and aggressively, we’re going to present the kind of issues we just talked about.”

Gangi, perhaps, does have one advantage over his Cambridge-reared opponent.

“I think we can run into people who have a certain kind of chauvinism about New York City. I was born and raised here, I’ve always lived here, I eat pizza with my hands,” Gangi said, alluding both the the mayor’s predilection for handling his slices with a fork, and his support for the Boston Red Sox and New England Patriots. “I root for home teams. And I’m a true blue New Yorker.”

De Blasio’s campaign responded with a typical comment harping on the mayor’s universal prekindergarten initiative, his executive orders hiking pay floors for public employees and city contract workers, his affordable housing plan and the continued downward trajectory of the crime rate during his tenure.

“Mayor de Blasio expanded Pre-K for every 4 year-old and raised wages for tens of thousands of workers. Crime is at record lows, jobs are at a record high, and New York City is building affordable housing at a record pace,” said spokesman Dan Levitan “That is the mayor’s record, and one that New Yorkers are rallying around.” 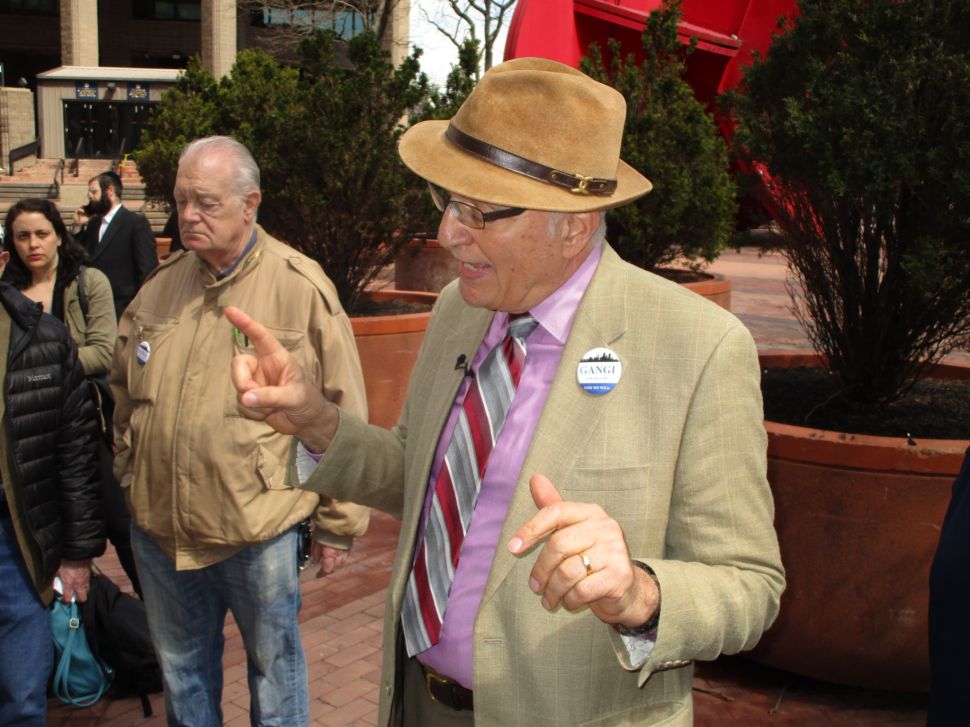