Lithuanians are preparing to resist Russian invasion—signs of which they see coming from everywhere. Last summer, when the Central Bank of Russia issued five collectable coins commemorating the liberation of European capitals by the Red Army—one of them being Vilnius, the Lithuanian capital—the country’s Ministry for Foreign Affairs reacted immediately. “Russia is not ready for the historical truth on the Soviet occupation,” Rolandas Kacinsakas, the Ministry’s political director said. The coin that drew the ire of Lithuania had an image of the monument to the “Soldiers-liberators” that, from 1952 to 2015, was located on the Green Bridge of Vilnius. Lithuanian officials insist Lithuania was occupied—not liberated—by the Red Army.

The monument was removed in July 2015 over “health and safety” concerns.

The coin incited a small diplomatic scandal between Russia and Lithuania.

The world-famous Alexandrov Ensemble is banned from performing in Lithuania. On paper at least, the collective is part of the Russian Defense Force, and its members are part of the military.

Last Christmas, the mayor of the Lithuanian town Simonyse demanded that the star on the top of the central town square’s Christmas tree be removed. The star reminded him of Communist ideology and the USSR flag it decorated.

As the mayor was about to personally climb the Christmas tree to take it off, he was confronted by an angry mob who forcibly stopped him, blocking off the area with their cars, Postimees reported.

The local handyman who designed the star was born in independent Lithuania. He said he didn’t intend to provoke anyone; the star was blue on one side and pink on the other.

“I am not changing my mind,” the mayor said while retreating, “This is [a] red five-corner star, like the one on the top of the Kremlin. I think it’s a bad choice. I stand my ground. In Lithuania, especially under such geopolitical circumstances, this must not happen.”

That same Christmas season, vigilant residents of the town Panevezys were unhappy with the colors that decorated the center of their town. The combination of white, blue and red reminded them of the Russian flag.

“Oh my God!” was all Vytautas Bakas, head of the Defense and Security Committee of Lithuanian Parliament, could exhale upon hearing the news, Delfi reported. The Vilnius bookstore “Knygų Pasaulis” (“World of Books”), located by the railroad station, was selling sets with toy soldiers, military helicopters, tanks and trucks. The price range was acceptable—between nine and 11 euros. What was not acceptable for Bakas was that the soldiers, tanks and trucks were Soviet ones. Some contained figures of Russia’s recent invention—scary “polite” or “little green men”—who became notorious in Crimea in 2015.

The toys’ packaging showed “little green men” with a red cat at their feet and were captioned: “Modern Russian Infantry ‘Polite People.’”

“Such toys are allowed to be sold in our country?” vigilant customers appealed to authorities. Arvydas Anusauskas, Lithuanian Parliamentarian and a member of the National Security and Defense Committee, believes that “with such ‘toy’ ‘polite people,’ [Russia] tries to nurture the distorted view of chauvinistic aggressiveness from the very young age.”

The toy soldier nightmare was not limited to the capital.

After they were removed from shelves in Vilnius, the sets with the Russian “little green men” were found in the town of Klaipeda. “It is not an innocent idea—the element of so-called ‘soft war’ that Russia wages against Lithuania for two years,” Algirdas Grublis, ex-head of the Klaipeda Department of State Security, believed.

Some in Lithuania think human-sized “little green men” may arrive at any moment.

Thirty-thousand copies of a Guide to Active Resistance were distributed in schools and libraries as a must-read for Lithuanian children. The 75-page paperback covers civil disobedience, strikes, disinformation, blockades and—of course—the organization of cyber-attacks against invaders.

To do one’s work “worse than normal” would be very effective—in addition to spying on invaders and reporting their every move to NATO headquarters. (Well, few believe NATO would not abandon Lithuania in the event of a successful Russian invasion.)

“Our citizens want basic knowledge on how to survive and how we can demonstrate that our people are ready to act against any aggression and fight for every centimeter of our land,” Defense Minister of Lithuania Juozas Olekas said.

Last week’s embarrassing event in the Lithuanian town of Šalčininkai, which is on the border with Belarus and a short distance from country’s capital city, crushed all hopes that the Guide to Active Resistance had prepared the country against invasion by its powerful neighbors from the East.

On April 11, on orders from the Minister of Internal Affairs of Lithuania Eimutis Misiunas, government-sponsored training to repel “little green men” ended in total fiasco for local security services, military and police—unlike the staged exercises (in front of cameras) that had been conducted regularly in Lithuania.

The simulated “occupation” of a Lithuanian town by “saboteurs” from an “unfriendly neighboring country” was conducted according to all-too-familiar military legend. Thirty “little green men” from the unfriendly state of “Undia” in uniforms without insignia illegally crossed the Lithuanian border by train. Mingling with regular passengers, the goal was to seize both the border checkpoint and the police commissariat of Šalčininkai.

The training was conducted in real-life conditions to evaluate how Lithuanian security, police services, border guards and military would react to actual invasion. None but a handful of the most-trusted high ranking officials had been warned in advance about the upcoming event.

Approximately 700 vigil policemen, security service personnel and border troops located in town were supposed to be the wall between the “invaders” and the Lithuanian state.

“This was not an exemplary exercise, there were no [performance-like] shootings or smoke,” the Minister of Internal Affairs of Lithuania said. “This kind of enemy forces moves quickly and quietly, so for the security service it would have been important to notice them, to report their movements and to react.”

Upon disembarking the train in Šalčininkai, the “little green men” from “Undia” were not trying to hide their presence from local residents. They operated openly and brazenly. One of the “occupiers,” armed with a Kalashnikov assault rifle, wore a sweatshirt with the words “FUCKING SOCIETY” across his back.

In accordance with objectives, they captured the border checkpoint first. Strangely and mysteriously, after “Undia” forces were seen there, checkpoint radio communication disappeared.

Next, they took the town’s police commissariat. Then—one hour after beginning the “invasion”—they took the whole town, “killing” more than 10 policemen during their “attack,” disarming police forces and taking many more hostage.

“The law enforcers turned out to be not prepared—they judged the situation inappropriately,” Misiunas admitted. “Their vests were inappropriate, and their weapons and their tactics were not up to par,” he lamented.

Authorities were also shocked by the indifference shown by local residents to the exercise, despite the fact that Russians and Belarusians together constitute no more than 11 percent of the town’s dwellers (a majority, 72 percent, are Polish).

Upon stumbling on armed “little green men” on their town’s streets, not a single resident called the Emergency Center—established for such a purpose by the authorities—showing that the country has a long way to go before the necessary level of vigilance will be observed.

Misiunas, bitter about the fiasco, promised that such trainings will be conducted in Lithuania on a regular basis from now on.

Not everybody supports his plan. On April 19, one week after the training in Šalčininkai, Rasa Juknevičienė, a member of the Parliament Security and Defense Committee and ex-head of the Defense Ministry of Lithuania, said that the “training” was conducted “within a hair-length from the tragedy.” She pointed out that the police did not open fire on “assailants” although they had every right to do so. She also expressed concern that, in the future, the real “green men” could capture the Police Commissariat and the town simply by declaring they’re conducting “anti-invasion” training, BaltNews reported. 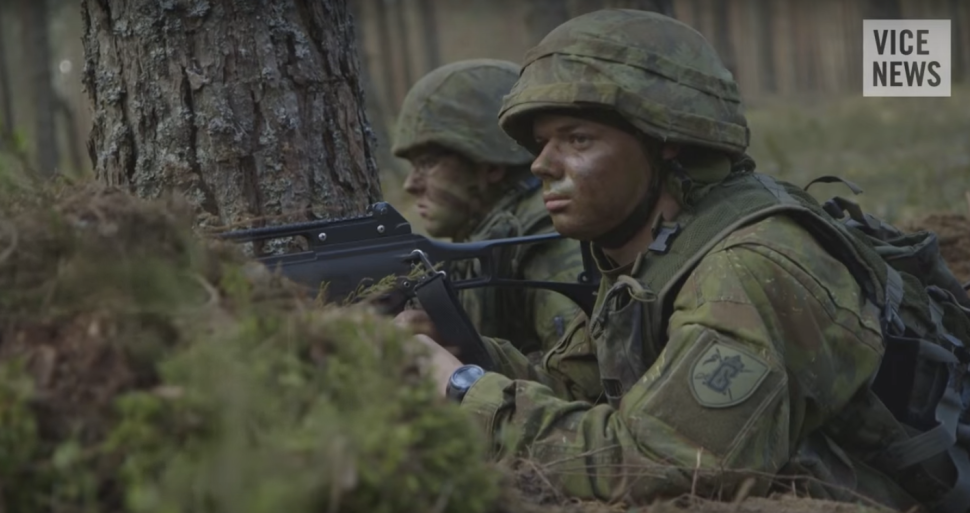