It appears Senate Democrats will filibuster the Supreme Court nomination of Judge Neil Gorsuch. 60 votes are needed to overcome a filibuster, and it looks like Republicans will have only 56 (52 Republican Senators + Dems Joe Manchin, Heidi Heitkamp, Joe Donnelly who will be voting for Gorsuch, plus Michael Bennet of Colorado who will be simply opposing the filibuster votes. Keep in mind that Bennet, while he is a Democrat, is from Gorsuch’s home state of Colorado and is more inclined to vote for Gorsuch despite the clear political differences between the two.) Republicans will not be able to get the 60 votes needed to overcome the filibuster, as 41 Democrats have already come out and said they’ll go along with the filibuster.

So the nuclear option it is.

Neil Gorsuch is a smart, eminently qualified Originalist who deserves to sail through the confirmation vote. But Democrats, who largely believe in a judicial philosophy revolving around a “living, breathing constitution” where the Constitution is interpreted to say whatever serves their current political desires, not what the drafters intended it to say, are vehemently opposed to the Originalist Gorsuch, who believes the Constitution means what it says and its words shouldn’t be twisted and stretched to suit modern political ambitions. More importantly, Democrats hate Donald Trump with a burning passion and would oppose any Trump nominee not named Merrick Garland or Barack Obama himself. Most Democrats didn’t even know who Neil Gorsuch was but had already decided he was “extreme,” hated women, wanted to kill the poor, destroy the natural world and ruin as many Americans’ lives as possible out of the sheer, malignant wickedness inherent in every Republican.

Democrats even tried to hammer Gorsuch for helping his Republican mom’s campaign for some obscure local office — when he was eight years old. They tried to say he was “evasive” despite a liberal Washington Post journalist admitting Gorsuch was just as forthcoming as Ruth Bader Ginsburg was during her 1994 confirmation hearing. That’s the nature of these things —they’re battles between the nominee and the Senators. Senators are mostly lawyers and ask pointed, loaded questions to get the nominee into hot . Court nominees don’t want to disclose a lot about their judicial philosophies because of what happened to Robert Bork in 1987, who was as honest as possible and got rejected by the Senate after having his words twisted and misconstrued against him by dishonest Democrats like Ted Kennedy and Joe Biden. So SCOTUS nominee hearings — and virtually all congressional hearings, for that matter — are always exercises in conversational sparring, and adversarial in nature. That’s just the nature of the game.

Democrats are gonna Democrat. They will always portray Republicans as scum-of-the-earth, sub-human demonspawn, as opposed to simply saying “I strongly disagree with Judge Gorsuch on most every issue, but he is, by all accounts, a qualified, honest, upstanding, virtuous man.” With the left, it’s never “I’m right and you’re wrong,” it’s “I’m right and you’re Literally Hitler.” And, as such, of course they were going to slander and smear Gorsuch, then gratuitously filibuster him.

So this is the path they’ve chosen. I was, at first, tempted to view their adolescent temper tantrum as the typical conduct of the out-of-touch, overly-entitled leftwing. But then I realized they had another option that would have been tactically and politically superior, and that they didn’t take it because they cannot see past their searing hatred of all things Trump.

Democrats had a choice here. They could’ve let Gorsuch be nominated without too much of a fight, given that he’s a conservative Originalist replacing another conservative Originalist, Antonin Scalia. Gorsuch does not alter the balance of the Supreme Court from when Scalia was alive. When Scalia was alive, the court had a 5–4 Republican majority (meaning five of the nine nominees were appointed by Republicans). With Gorsuch, that 5–4 majority will be restored.

Senate Democrats could’ve opted not to filibuster Gorsuch and let the nomination go to a simple majority vote. They could’ve all voted against and then exhorted their voters “We need the Senate majority in 2018 to prevent this from happening again.”

The reason they should’ve let Gorsuch go through is to avoid the Nuclear Option and make Republicans have to deploy it on the next SCOTUS vacancy. Anthony Kennedy is 80 and, while he’s a Reagan appointee, is generally considered the swing vote on the court. If Trump got to replace Kennedy with another Originalist, a conservative, that would change the balance of the court in a major way. And what about the 84 year old Ruth Bader Ginsburg, the court’s most liberal Justice? She falls asleep during State of the Union Addresses and clearly does not have long on the court. If Ginsburg happens to retire, or die, during Trump’s term, wouldn’t that be the SCOTUS battle Democrats should channel their inner Gandalf for?

Oh, and if that weren’t enough, consider that Stephen Breyer, a Clinton appointee and one of the court’s most reliable liberals, is 78. So he doesn’t have a ton of time left, either.

The point is, Democrats should’ve kept their powder dry and dared Republicans to use the nuclear option on the next Supreme Court nominee fight. That’s the one that will truly alter the balance of the court. This Gorsuch fight is peanuts compared to the next one. Perhaps Republicans would balk at going nuclear, for the first time ever, on the next one when it will so clearly be a battle for the ideological soul of the Supreme Court. Perhaps the Democrats could make a huge deal out of the possible use of the unprecedented nuclear option and, with the help of the in-the-tank “mainstream” media, turn public opinion against it.

When the Ginsburg seat is eventually vacated, the precedent for the nuclear option will already be established from this week’s Gorsuch battle, and Democrats’ cries that Republicans are packing the court with heavy-handed Senate tactics will fall on deaf ears.

So get nuked, Democrats; now, and on the next vacancy.

Austin Frank is the founder and publisher of Today in Politics, where this post originally appeared. 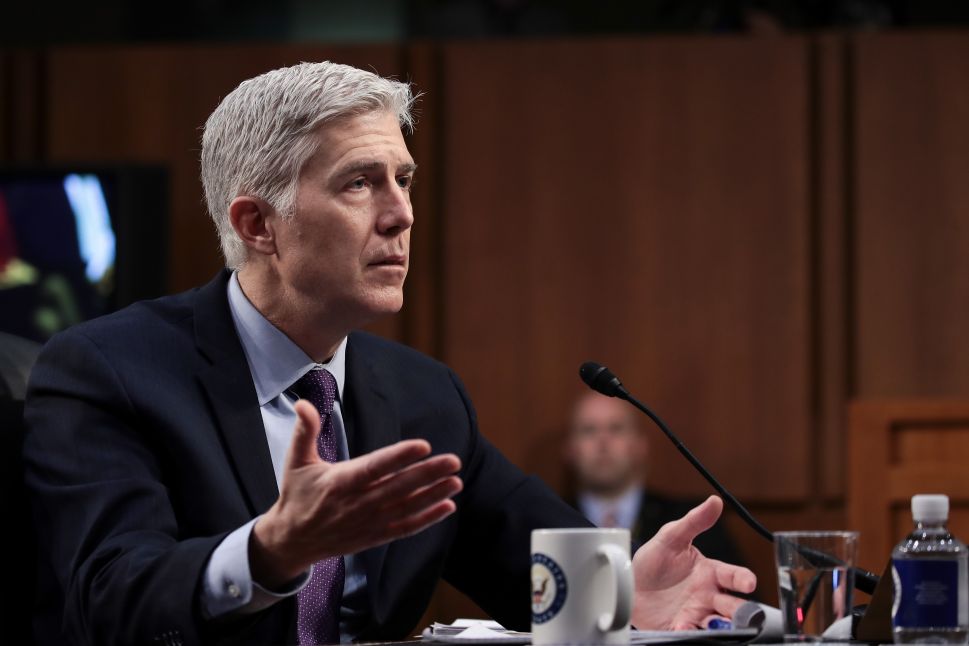