There’s something odd happening over at CW’s Arrow, and you can color me downright intrigued. The hullabaloo began after star Stephen Amell and executive producer Marc Guggenheim seemed to confirm the return of Manu Bennett as the eye-patch-rocking fan-favorite mercenary Slade “Deathstroke” Wilson.

Bennett’s Deathstroke–who took Oliver Queen under his wing on the island of Lian Yu and essentially turned the boy-billionaire into a seasoned ass-kicker–hasn’t been seen on Arrow since Oliver and Thea Queen locked him up in season 3’s “The Return” (not counting his wordless, alien-hallucination appearance in the series 100th episode). So an actual reappearance would be a big deal, and no one appeared more shocked about it than…Bennett himself.

Which isn’t even that surprising; actors and filmmakers play dumb all the time in order to keep plot points under wraps. Remember when the cast of Game of Thrones did everything short of light Kit Harington on fire during a Facebook Live to convince the world Jon Snow was really, really for real dead? It happens. But Bennett has been doubling down on his denial,  going as far as aggressively hash-tagging a quote from Under Siege 2.

For the record – I'm not going back for Arrow! #assumptionisthemotherofall…

Just last night, Bennett took to Twitter again to casually drop the line “Enough b.s. about d.s.”–I assume something like “enough shade about Slade” is in his drafts folder–and assert that he is in Australia filming MTV’s The Shannara Chronicles, and therefore it is a FACT he could not be filming Arrow in Vancouver.

Enough b.s about d.s!!! FACT: Deathstroke #Arrow are currently filming in Vancouver IS NOT ME. I am in Auckland filming #shannarachronicles pic.twitter.com/kkVBOdXlSL

So, a lot to unpack here, not the least of which is Bennett’s dedication to hashtags even in the midst of a denial rant. The script cover from Guggenheim says “Lian Yu” is shooting from April 7-19. Right now, Bennett has a week to get from Auckland, Australia (where Shannara Chronicles does, in fact, shoot) to Vancouver, Canada. Deathstroke, Bennett or not, is pretty much confirmed to be in the episode, thanks to photos from Guggenheim and some quotes from episode co-writer Wendy Mericle, who told EW “You’re not going to believe who Oliver is working with to defeat Prometheus…It’s going to be all about Oliver’s family, but not the family we’re thinking of right now.”

But, more importantly, Bennett himself practically confirmed he would keep a Deathstroke return a close-guarded secret, should it happen. While trying to clarify some remarks he made at Melbourne’s Supanova expo disagreeing with CW’s decision to have everyone kick Deathstroke’s ass, the actor told Digital Spy “If Deathstroke shows up again on Arrow, everyone will be a lot happier if they didn’t know [in advance].”

1) The far less likely scenario, but the one I so badly want to be true it physically aches is that Bennett just straight up doesn’t know he is set to fly from Australia to Canada to film a superhero show. Maybe he has Charlie the Intern from Bojack Horseman as his agent or something. I don’t know. The details don’t matter to me as much as the fact there’s just something so funny about the image of an actor watching his former co-star and producer warmly welcoming him back in a state of confusion and maybe rage. I want Arrow‘s season 5 finale to end with Manu Bennett bursting on to set in his own homemade costume screaming slurs in a New Zealand accent while challenging whoever it actually is under the Deathstroke mask to a fist fight.

2) But, back in reality, Bennett is just playing the PR game. I respect it. And I do love the probability that the actor’s original “WTF?????” response wasn’t confusion, but a bro-like come on, man over Amell letting the cat out of the bag early. 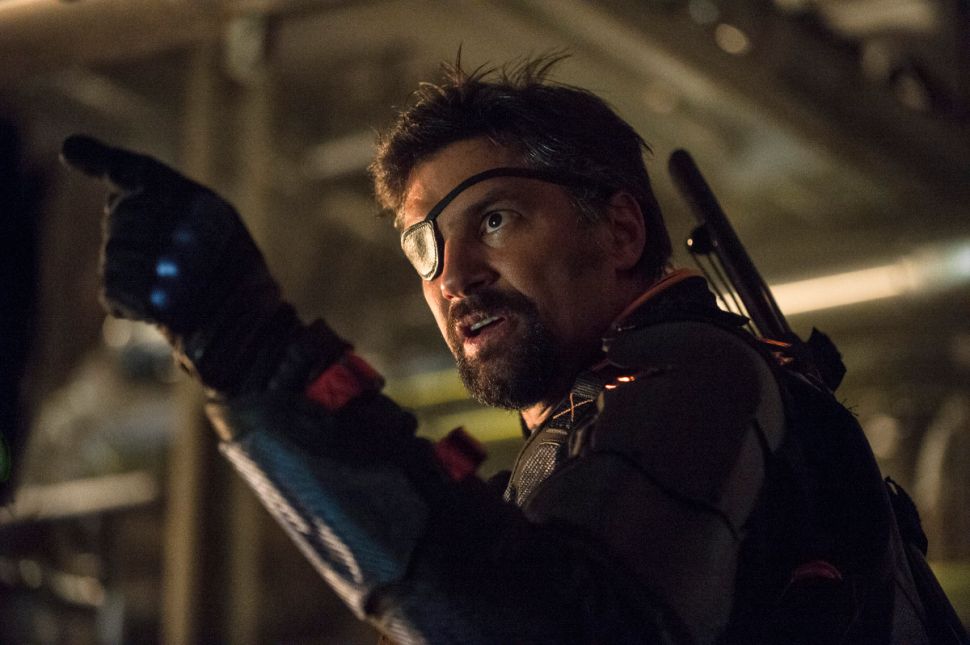