Two former anti-Israel activists from South Africa are touring US college campuses on a mission to reclaim a part of their country’s history they claim has been “hijacked” by the anti-Israel Boycott, Divestment and Sanctions (BDS) movement to further its own political agenda.

As college students, Klaas Mokgomole and Yolanda Makhasi had both fallen victim to the rampant lie that Israel is an “apartheid state”—a trigger term they believe sways many to “support BDS without knowing all the facts.” They recently completed a trip to four West Coast college campuses as part of the “Reclaiming Your Story” tour sponsored by StandWithUs and Africans for Peace.

“Over time, what I was hearing from [BDS operatives] about Israel didn’t add up, and I realized I was being lied to,” said Mokgomole, a former member of Witwatersrand University’s BDS movement, a chapter notorious for violent anti-Israel activity. “I decided to research the issue myself, eventually visited Israel, and concluded that BDS will tell you whatever you want to win you over.”

For Makhasi, who said she would “protest against Israel every chance [she] got,” students are “being caught up in wave of apartheid to support a movement they are not well informed about.”

“There was a time when my father even asked me why I was protesting Israel so much, and I answered because there was apartheid in another country. It wasn’t until I later went to Israel that I got a full understanding of what was happening there and that what I was told wasn’t true,” she said. “My history and my country’s history is unique and shouldn’t be shared or used as an umbrella of segregation. Unfortunately, more and more students are naively taken in by this.”

On his second “Reclaiming Your Story” campus tour in the US, Mokgomole said he has come to realize that “most American college students are not really familiar with what happened in South African apartheid and don’t know what they’re talking about when discussing it in relation to Israel.”

“I come from a country whose people were the architects of apartheid. It’s easy for American college students to label Israel as an ‘apartheid state’ merely because they heard it from BDS activists. They don’t realize they are being lied to, and that’s what we are trying to stop,” he said.

While engaging with students on campus, Mokgomole and Makhasi said they deliver “straight facts” concerning Israel and challenge students to research the issues for themselves.

Students, Makhasi said, are being “spoon fed information by BDS activists.” She encourages them to be “independent thinkers and ask hard, critical questions. I tell them not to protest something you know nothing about. Whatever the outcome, students must obtain their own opinion instead of preaching those of others.”

For Mokgomole, the key to countering “the apartheid lie on campus is to educate people and make them understand how Jews came to be in Israel,” he said. “The BDS movement refuses to take into account, for example, that Jews have been living in Israel for thousands of years and have no problem saying Jews are settlers in the Middle East. Even without the Bible, you see this fact plainly through archaeological evidence.”

“As South Africans whose families lived through apartheid, they have a deep understanding of the suffering it perpetuated,” she said. “Speaking across the US, these brave South Africans have been able to counter anti-Israel comments with experience that comes from practical and personal observations. Sadly, their experiences have also made them targets for the BDS-led lie that accuses Israel of the same apartheid-like qualities.”

While the presence of the two South African peace activists did not stir up much controversy at the campuses they recently visited—Stanford University, University of Washington, University of California, Davis and Berkeley—there were standout moments that both Mokgomole and Makhasi said showed their actions are making an impact.

“At the University of Washington, for example, after our presentation, one student who identified as anti-Israel privately approached us,” related Makhasi. “He wanted to know more about what we stood for, and we ended up talking for a long time. This is what we are setting out to do—to get students to think for themselves.”

Lea Speyer is a New York-based journalist and contributor to the Haym Salomon Center, a news and public policy group. 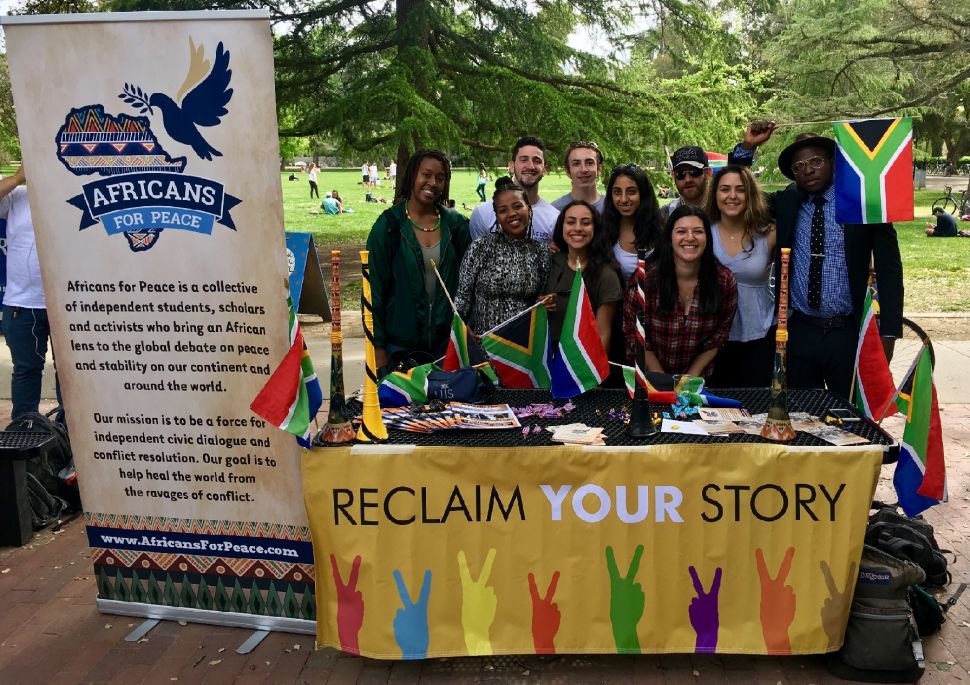