CAPE CANAVERAL, FL—An email received by the Observer indicates that SpaceX, the Elon Musk-founded space flight company, will launch a classified payload to support clandestine activities for the National Reconnaissance Office (NRO). The mission is not listed on SpaceX’s customer manifest.

Very little is known about the mission, though the limited public knowledge is consistent with the protocol for NRO activities. We do know that SpaceX is targeting April 30th at 7AM ET for liftoff of the agency’s payload from Launch Complex 39A at NASA’s Kennedy Space Center. A test fire of a brand new Falcon 9 rocket being used for the delivery is scheduled for April 26th. The payload is, most likely, a spy satellite, due to the long history of these NRO launches and citizen-sleuths who keep close watch on the skies.

On the heels of re-flying the world’s first re-useable orbital rocket, this is another milestone for the company in as many weeks and sharpens SpaceX’s competitive edge when vying for lucrative military contracts. This will be the first time the company is exclusively launching a classified payload for the NRO.

Previous missions for the agency—which describes itself as “the U.S. Government agency in charge of designing, building, launching, and maintaining America’s intelligence satellites”—have been previously facilitated by veteran military defense contractor (and primary SpaceX competitor) United Launch Alliance. ULA is a joint venture between Boeing and Lockheed Martin.

“Since its establishment on Aug. 25, 1960, the NRO has been an entirely ‘black’ organization. The Federal Government has never admitted that it exists, and its name is officially secret,” explained a 1985 New York Times article.

The initial purpose and objectives of NRO spacecraft are almost never revealed. But later reporting has concluded that the agency, which is based in Fairfax, Virginia, oversees surveillance activities for the Navy, Air Force, NSA, and the Central Intelligence Agency.

Satellite images obtained by an NRO satellite in 2012, for instance, show the movement of Syrian troops and artillery around civilian areas that would later be devastated by bombardment. The US Ambassador to Syria during the Obama Administration, Robert Ford, posted the images on facebook during the second year of the Syrian civil war (and subsequent refugee crisis) to argue for intervention by the United Nations Security Council and Arab league states.

“When the United States needs eyes and ears in critical places where no human can reach – be it over the most rugged terrain or through the most hostile territory – it turns to the National Reconnaissance Office,” explains the agency’s website. “We never lose focus on who we are working to protect: our Nation and its citizens.”

The Observer was on-site last year for a previous NRO mission that saw the world’s most powerful rocket in operation–the Delta-4 Heavy–launch a secretive payload to a distant orbit. Days after the launch in June of 2016, Dutch satellite tracker Marco Langbroek and Australian astronomer Paul Camilleri discovered the agency’s satellite over the Strait of Malacca–located between the Indonesian Island of Sumatra and the Malaysian Peninsula.

According to well-known citizen skywatcher Ted Molczan, the payload delivered during that mission, designated NROL-37, is believed to be a MENTOR satellite equipped with state-of-the-art eavesdropping technology. Molczan also claims that the satellite deployed a football field-sized mesh antenna to capture electronic signals from other satellites, ships at sea, and aircraft.

MENTOR was developed with insight from the Central Intelligence Agency and encrypts the captured data before beaming it back to federal authorities in the United States. According to Spaceflightnow, the spacecraft “likely intercept telephone calls, radio signals and missile telemetry transmissions.”

SpaceX’s mission for the NRO is designated NROL-76 and was first hinted to during a congressional hearing in 2013 according to SpaceNews. They also reported that NRO director Betty Sapp lauded SpaceX at the GEOINT 2016 conference for “challenging the conventional wisdom about how to build a rocket” and announced that the spy agency has “bought launches from SpaceX.”

The NRO previously piggybacked on a SpaceX/NASA orbital demonstration flight of the Falcon 9 in 2010 in which a smaller, agency-owned cubesat was delivered as a secondary payload. In a statement to SpaceNews, an NRO spokesman said they are “anticipating the possibility of SpaceX supporting additional missions based on future competitions” following the launch of NROL-76 at the end of the month. 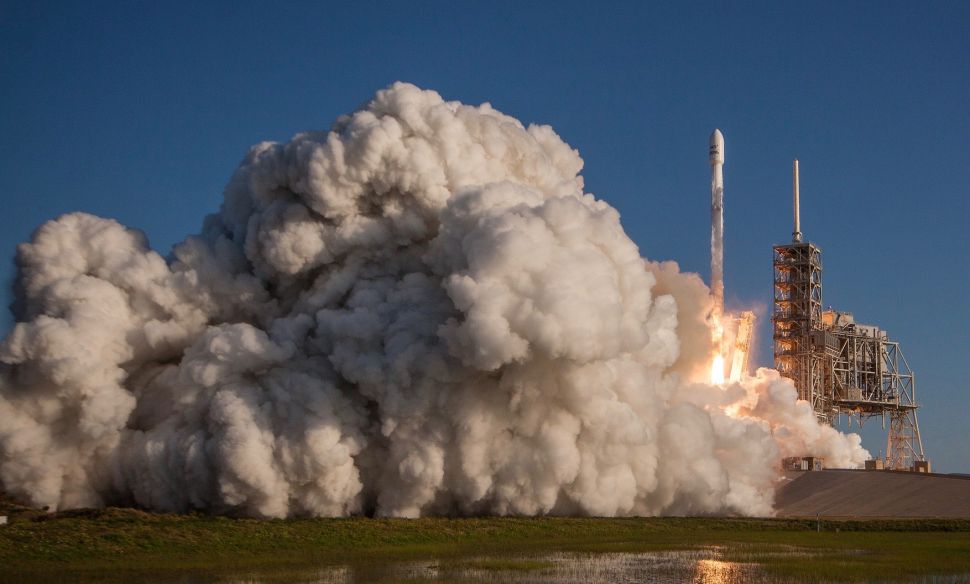