Erin Cronican has sensitive feet—she tells the medical students this every time they try to test her Babinski reflex to make sure her nerves are working correctly. But without fail, they dig the edge of the reflex hammer into her foot like they’ve been trained, and they hurt her.

“They are almost always mortified that they hurt somebody,” Cronican said, laughing. “But it’s the way they’ve been taught.”

Cronican, an actor who founded the Actor’s Enterprise, regularly receives tests like the Babinski reflex during one of her side jobs as a standardized patient in various medical schools in New York City. This type of work is not a new concept—it’s been around since the 1960s, but over the past 10 years, it has been adopted as a standard requirement for most medical programs.

What standardized patient actors do is train to portray the personal history, physical symptoms, emotional characteristics and everyday concerns of actual patients. Five actors may be trained to exhibit the exact same symptoms, backstory and appearance for a specific cause for headaches, so that no matter which doctor they see, they can be evaluated in the same way. It’s essentially supposed to mimic a standardized test, but with human beings. The purpose is to teach students how to interact with patients through one-on-one communication.

“You can’t learn how to communicate through a textbook,” actor Maybeth Ryan said.

Ryan has played many characters over the years, with her main claim to fame being her roles as a voiceover actor for commercials and audiobooks. But since an ad on the theater website Backstage tipped her off to standardized patient work, she says some of her most meaningful work has been in a simulation studio.

The cases the actors play range from everything like day-to-day headaches and panic attacks to domestic violence and terminal cancer, so the students are learning how to deliver bad news to the patients and their families.

“When they’re immersed in the science, and they’re being tested all the time. They forget there’s a human being on the other side of it,” Cronican said. “But then we get to, as an actor, actually reflect back to them, I get to actually respond and get cagey, or get quiet. I can help show them ‘when you asked it in this way, you actually made me uncomfortable.’ Or while they’re examining me, I can actually say ‘ow.”

Although each program is focused on the communication aspect, they all have their own unique spin on standardized patient work. For instance, Mt. Sinai’s Ichan School of Medicine has the Art and Science of Medicine program. At New York Medical College, they call it human simulation.

Dr. Sondra Zabar, who is director of NYU School of Medicine’s Standardized Patient Program, said NYU’s program is unique because it uses unannounced patients, similar to a “secret shopper” or an undercover boss. She said using a standardized patient to gauge how they handle patients is similar to someone going undercover in McDonald’s, making sure they cover all the bases from everything from smiling to saying “have a happy day” at the end.

“It’s really hard to get objective data from patients because there’s a power differential if you’re sick,” Zabar said. “So this is a way to get really objective patient view data on the health care system and the health care provider are performing and give that system back to our learning health system so they can improve.”

Zabar said they have a bank of over 500 cases with over 250 standardized patients in their database. Some of these cases are run-of-the-mill cases that every doctor or nurse will likely come across at some point. But Zabar helps create other, more unique cases she feels they should be prepared for, like training doctors on using the correct pronouns for transgender patients.

“We’re really fortunate to be in New York City,” Zabar said. “Our actors are diverse. We can portray a diverse patient population. You’re really only limited by your creativity, in terms of these developments and really thinking about what is it that we need to train our next generation to be able to do.”

But standardized patients aren’t only used for medical students. At the NYU medical center, they reversed the roles, creating a patient empowerment program where they train actors to be doctors or nurses, and the patients are the learners. They’ve been studying a group of diabetics, and so far, their studies have shown they are being more active in their health care by showing up to more doctors’ appointments, asking more questions and expressing their needs.

Both Ryan and Cronican said being a standardized patient made them more involved in their own healthcare and feeling more empowered when they go to the doctor.

“It has changed me tremendously as a person,” Ryan said. “I communicate completely differently now than I used to because of the skills that I’ve learned about how to communicate with patients and doctors.”

But Cronican said that being a standardized patient is not for everyone. Ryan said that “being able to split your brain” is definitely the hardest part. You have to keep a mental checklist of everything the student is doing, while also remembering your character’s backstory, symptoms and illnesses. Normally when you get a role, you prepare by studying the lines and becoming that character. With standardized patient work, you not only have to think on your feet as your character, but you also have to employ the logical part of your brain to remember “oh, did they check my blood pressure?”

To the actors, though, it’s more than just a side job. Often, Cronican says even though it does improve their improvisation and listening skills, they usually don’t even put it on a resume, and even though it can sometimes pay well, it’s not really about the money. It’s about giving back and feeling like you’re making a difference.

“The reason why I still pursue it and I’ve done it for so long is, it’s this blend of taking what I do as an actor and then making a real difference in a completely different environment,” Cronican said. “Being able to actually be in the medical industry as an actor is very interesting, and really getting to be a part of saving someone’s life someday, or making a patient feel more valued, might have something to do with the way I trained them as an actor.” 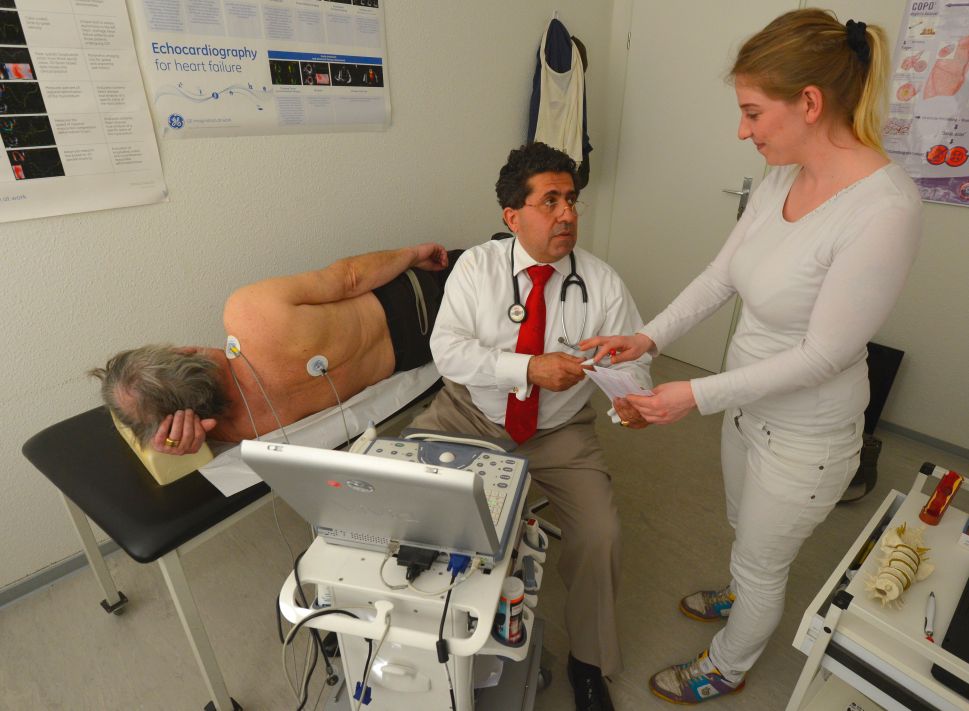