His world building is unparalleled, his storytelling is addictive and his dialogue always pops, but Stephen King’s greatest strength above all else is his ability to scare the ever-loving shit out of us. With all due respect to masterpieces such as The Stand and The Dark Tower series, King’s best bed wetter is without a doubt It.

Thanks to Pennywise The Dancing Clown, children’s birthday parties have been ruined forever. While clowns have long been eyed with suspicion, King helped the circus figures create their own sub-genre of fear (one I Hate Clowns Facebook page has nearly 400,000 likes). From John Wayne Gacy and The Joker to the Poltergeist doll and the “killer clown” craze from 2016, the imagery has been synonymous with terror for decades in both pop culture and real life. But why are people so afraid of clowns and, more importantly, how can 2017’s It inflate this trepidation like a balloon animal to deliver a colon emptying movie?

The fear of clowns is so common that it has earned its own term: coulrophobia. Though clowns are meant to be fun and amusing, the reality is they trigger negative reactions deep within our minds.

One reason is the uncanny effect, a phenomenon that unsettles individuals when they encounter things that look human, but are slightly off. (Congratulations, you now know why you hate Jeff Dunham and his creepy ventriloquist dummies so much). This is a fundamental reflex with one theory suggesting it makes us think of corpses and death; dead faces that appear average but behave differently. That’s fitting for Pennywise – distorted smile, ghastly skin tone and bulging eyes – a being so ancient, inhuman and cruel that his power flows from a fear of death.

Then there’s the unpredictability. Humans are programmed to despise the unexpected and avoid uncertainty. There’s a reason you ignore the obnoxious drunk guy on the train or the crazy homeless person yammering in the corner. When people stop adhering to societal norms, our id starts setting off alarm bells. One of the tenets of quality clowning, though, is to defy expectations, hence our wariness.

Though King may have popularized the fear of clowns, the turnoff existed long before his red-nosed bastard showed up. French literary critic Edmond de Goncourt touched on their unsettling nature back in 1876, writing: “The clown’s art is now rather terrifying and full of anxiety and apprehension, their suicidal feats, their monstrous gesticulations and frenzied mimicry reminding one of the courtyard of a lunatic asylum.” More than one hundred years later and that sentiment still persists like a bad joke that just won’t go away (see: Harambe memes). “Where there is mystery, it’s supposed there must be evil, so we think, ‘What are you hiding?’” Andrew McConnell Stott, Dean of Undergraduate Education and an English professor at the University of Buffalo, SUNY said.

Maybe King knew all this when he wrote It or maybe it was just the drugs talking (not a stretch). Either way, it’s clear the man has the innate ability to tap into our primal fears, burrow his way into our subconscious and externalize what lay sleeping in our deepest and darkest. With his roadmap and our predisposed distaste for squirting flowers, there’s no reason why this year’s It can’t live up to the hype. The film can borrow what worked in the original while also laying on a fresh new coat of face paint. Delve into the psychology of terror incarnate, as Pennywise is able to manifest itself as the worst fears of its victims (how would you even try to shield your mind and insecurities?). Don’t be afraid to hold up that fun house mirror to a society whose empathy has been dulled by a deluge of mass killings. Pie the audience in the face with this undercurrent of terror and trauma.

Adaptations of the author’s works have ranged from flawless to inter-dimensional hell portal. Based on the first trailer though, it looks like the new It is staying faithful to the source material while taking a fresh and modern approach to that root source of fear introduced decades ago. The entire vibe feels like the King-verse with spooky set pieces and a looming sense of dread with or without Pennywise on screen. That projector scene makes me thank god we live in the digital age.

While we’re on the subject, it looks like this new version will honor Tim Curry’s beloved take on the character, though Bill Skarsgård’s iteration is more visually menacing. Not to overstate things, but the movie likely hinges on the actor’s relatively untested shoulders. He’ll either crush it or make audiences yearn for the good ‘ol days of giant rubber demon spiders.

This trailer is a good start; the kids look well cast and the visuals are beautifully creepy. But to hold up over the course of an entire movie, It is going to have to marry the straightforward and longstanding fear of clowns with relevancy and some updated thematic heft. The movie will need to play on our internal discomfort and force us to confront what we hoped would stay dormant. Yes, that may be a sky-high expectation, but I’m hoping we all float when It hits theaters. 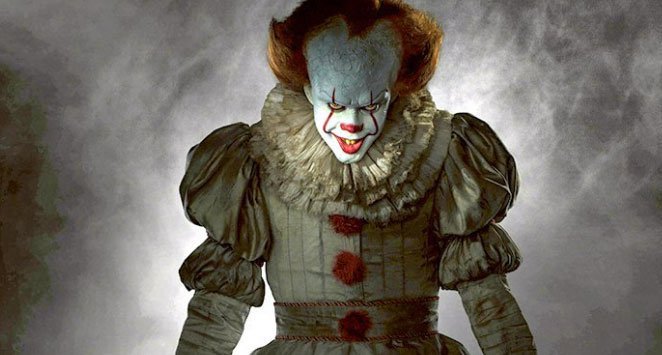