“He cannot poop in every coconut.”

These were words said on television last night as Stranded With a Million Dollars concluded with four people making it to the end. But not before Cody relieved himself in not one, but two freshwater sources for the second time in consecutive episodes. Prob def a new record for most public dumps. There’s a skit on Disc 2 of Biggie’s Life After Death where the Notorious talks about being surprised that a woman wants him to literally stand over her and do a number 2. Biggie is confused. “I might shit on you after I hit it, I won’t call you no more, shit on you like that.” The punchline being that even though he’s taken aback by this request, he still does it. For years, reality show contestants have been metaphorically shit on. Backstabs, blindsides, even using someone’s toothbrush to clean the toilet. But now we have reached the apex. A grown man in squatting position, pulls his shorts down and two televised plops drop into the underneath him. To quote the Biggie hook, “you nasty boy, you nasty.”

Alex and Gina managed to survive no clean , no cooked food, no pot, and no good strategy to make it along with Cody and Makani to take home $124,000 a piece. Alex and Gina managed to stay an extra two days on the island despite getting a temptation on Day 38 that would have taken one of them off early and given one of them $150,000 ($25,000 more than they would end up getting if they stuck it out to Day 40 for the split). And I get why they both voted to stay because they had been depending on each other for support to the end. But at the same time, I would have taken that deal so fast all you’d see would be a path of dust and a trail of drones spinning around like Porky Pig’s bowtie in my jet stream. All season Alex has been making decisions like this and all season he has paid the price for it. Here are Alex and Gina, convinced that by not abandoning each other they made some higher moral choice. That they’re playing “righteously.” That’s been their MO throughout the show. On the other hand, you have Cody and Makani who happily defiled a source to try and starve and dehydrate out their competition, confident that doing whatever it takes to win is completely justified. Those two opposing game strategies are common in reality tv, but for some reason, they were both taken to the nth degree on this show. And now all four of them get the same amount of money. That said, Alex made it to the end, gets an equal share of the prize, and isn’t “the guy that shit in the ” for the rest of his life-slash-forever-or as long as the internet lasts. However, however, being that guy feels like something Cody is actually proud of. To quote another great song from the ’90s, “you get what you give.”

But if anyone is a true champion here, it is Gina. Everyone’s pick to be the first one gone. The one with the least survival experience. I’m sure after the six other contestants evacuated, they were all like “damn I can’t believe I went before Gina.” Now they should all be like “I wish I lasted as long as Gina.” Do you realize that Gina couldn’t start a fire, can’t swim, couldn’t carry anything, and absolutely did not help her team win any of the competitions (since Cody and Makani literally swept every contest Harlem Globetrotters vs Washington Generals-style). And yet, who gets an equal share of the money? Gina F PandaBaby, please say the “panda.”

The one bit of suspense added into this final episode was that if they didn’t make the final journey in time, they’d have to stay an extra night. Nobody wanted to do Day 41. I don’t think they even had any supplies with them besides the money and the tablet. Cody didn’t want to leave the tent because he didn’t want people to think he was polluting. I guess the two logs of human feces he left in the lagoon don’t count. But the pot, the machete, the tents—all left behind. And that’s like $80,000 worth of stuff right there. The trail led up a hill and then they all had to repel down a waterfall. It was close and thank goodness for Gina’s life jacket but everyone made it. Speaking of Gina’s life jacket, it’s probably good they kept it away from Cody, he might have tried to take out the stuff that makes it float like when Patrick Swayze plays dud parachute roulette in Point Break.

And so just like that, my new favorite show comes to end. They didn’t spend all the money which is really a shame. And the game definitely took some turns that nobody expected. If they do a second season, it’ll be interesting to see if there is a new “no shitting in the ” rule. The pettiness levels were off the charts here. Everyone would have made so much more money if they decided to work together / not try to starve one another / not burn $60,000 / not refuse to carry the flare case so someone could quit easily. Every plot backfired in the end. And the season basically hinged on two people getting randomly and spontaneously ill. But a success nonetheless. A shit-filled, thrive-nugget success. Please give me more, I’ve got the dreamer’s disease. 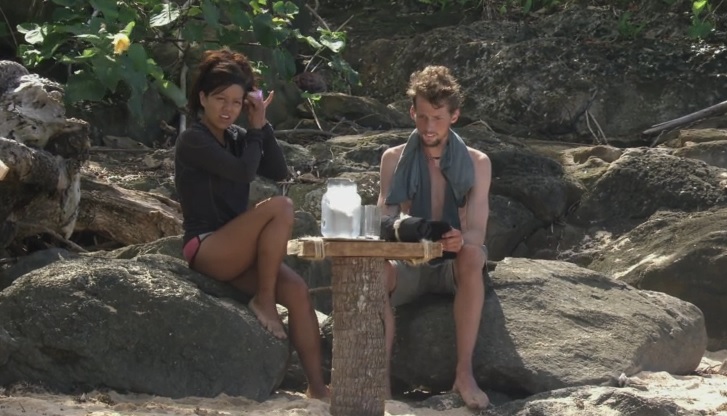