Congratulations to my new favorite show Stranded With a Million Dollars for officially creating the pettiest episode of television ever created. Never in the history of broadcasting has there been such escalated animosity that one hour of scheduled programming could begin with people ripping and burning over $60,000 of shared prize money out of spite and end with a teaser scene from next week’s ep of another person literally launching a doody into their opposition’s drinking .

A lot of shows have had great rivalries where two sides face off in an epic war like that time George Bush moved across the street from the Simpsons. But most of the time, and especially when there is a communal prize, the two sides realize that they have to come together to benefit at all. Even on Real World where there is no incentive at the end other than a stint on the Challenge and some Spring Break teen tour celebrity bookings, there’s always an episode where the whole house tries to come together to get the most out of the experience. On Stranded With a Mill, they’re like “nahhhhhhhh.”

So Cody and Makani pulled a power play on Alex and Gina now that there is no majority in place to buy a children’s birthday party’s worth of pizzas every week. They took the pot away and are trying to dehydrate/starve out Alex and Gina. Alex and Gina have the machete and their tent. And they believe that not getting to use the pot means their exempt from carrying anything heavy on the journeys. Let me set the record straight here, the argument about carrying things has been going on for weeks already. And at this point, everyone has pretty much done something terrible to the other team in the name of “the game” or “fairness.” There are no clean hands anywhere on this island, which is a metaphor but also literally true—we’ve already seen Cody wash his butt in the drinking a few weeks ago, last night he peed upstream from where Gina was drinking, and next week he’s dropping an upper-decker except it’s directly into a river and not the tank of a toilet bowl. Plus, when he and Makani won soap, Cody was like “Nah, I’m good I’ll just get dirty again.”

I’m not saying there is a way to reconcile the two sides at this point. Convincing John from Fraggle Rock and Vanessa from Big Brother 17tag-teaming up like The Rockers couldn’t talk these two sides into squashing their beef for a larger take of the prize. But the obvious is clear, if they worked together, they’d make more money. Now, my take on this as an audience member is that I don’t care how much money they make. I wanted them to spend it all, which meant that the majority alliance needed to stay in power. But I also wanted to see the power shift. I am large, I contain multitudes. So it makes me very happy to see Alex try this hail mary gambit of destroying the prize money. He and Gina really thought it was going to work. It probably should’ve worked. I mean what they were asking for (two jars of peanut butter and a small pot) was like $25K or something. But the pettiness is too strong. Cody and Makani refused to give in. Which was also great to watch. Because Alex and Gina were shocked. They said they were going to burn it all but Cody and Makani’s decision to let them do it and not give in stopped them at like 60 grand. So who wins here? Alex and Gina got their bluff called. Cody and Makani lost a bunch of their prize money. They all lose. You know who wins? Me. I do. The question is moot. I get the car.

The scene in this episode when Makani is reading from the tablet and there’s like 50 feet between her (and Cody’s) tent and Alex and Gina’s tent and Alex is sitting on the ground and won’t look at her and keeps yelling “read louder” but won’t get up and come over is one of the funniest things that I’ve ever seen in my life. The idea that there is a “right” way to play this game and that sleeping in tents is bad or sleeping in tents is good, or starving the other team out is bad or buying food for your opponent is good—they all have such strong opinions based on this incredibly ridiculous setup of being stranded on an island with a million dollars—where the cash isn’t even real, it’s a proxy and socks cost the same as a Manhattan one bedroom’s rent. Watching Alex flip out after he lost the fruit basket challenge—incredible! Makani’s reaction to them burning the money—classic! Cody realizing that Gina is somehow not going anywhere and will be there at the end—mind-blowing and yet still, epic!

The twist is and we’ll talk about this next week—all of this is in good fun until it isn’t. I don’t want to actually watch anyone shit in a river to poison the body of another human being. That’s where I draw my pettiness line. It’s like my vomit line. I want to see someone throw up on a Challenge like one maybe two times. Like a really good waterfall. Three is pushing it. And four is my absolute max. After that, I’m longer enjoying myself. The same theory applies here. Pettiness is the perfect motivator. It makes people do excitingly stubborn and retaliatory things. It makes for good television. Until somehow intentionally tries to poison you with their shit. Then it’s time to get the rule book out and start making some changes. There’s a “no machete-ing the tent” rule. Maybe there should be a “no trying to force someone to ingest your waste” rule. In the spirit of gamesmanship and all. For the culture. 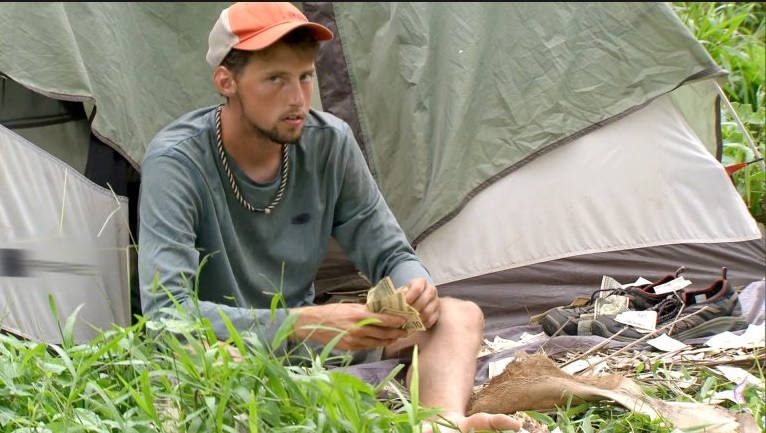