On April 11 the White House released an intelligence report accusing Russia of trying to cover up the use of chemical weapons by Syrian President Bashar Al-Assad through a global disinformation campaign replete with “false narratives.”

As a professor of Soviet history with an interest in media studies, I’ve been following Russia’s response to the chemical attack and subsequent U.S. missile strike – the various television and print news stories, tweets and analyses put forth by Russia’s domestic and international media outlets.

Jumping to the wrong conclusion

Inside Russia, all state-run media outlets and many independent ones are emphasizing that the Trump Administration has wrongfully (or at least prematurely) condemned Syrian President Bashar al-Assad for being behind the April 4 attack; has taken military action overseas without Congressional or UN authorization; and has indirectly helped terrorists by damaging an airbase essential to fighting ISIS.

Their stories echo positions championed by the Russian government. When news of the chemical attack broke, a spokesman for the Ministry of Defense posted a YouTube video explaining that the Syrian Air Force hadn’t dropped chemical bombs on civilians. Rather, it had destroyed a warehouse where militants – unbeknownst to the Syrian government – were producing land mines packed with toxic chemicals.

And after the U.S. missile strike, the Russian Foreign Ministry published a report detailing numerous cases in which (it claims) terrorist groups have deployed chemical weapons and then blamed Assad.

Meanwhile, Russia’s Kremlin-funded, English-language media, intended for a foreign audience, are echoing these claims, but with a twist.

With its slogan “Question More,” the international television agency Russia Today (RT) is promising to expose its viewers to certain “truths” of the Syrian story that, it says, are being clouded by Western spin.

For example, RT’s English website published an editorial deploring the “absolutely psychopathic knee-jerk reaction” of Western media in voicing immediate support for the U.S. decision to retaliate against Assad through military action.

In particular, RT is emphasizing the difference between the international outrage over civilians killed in Syria’s recent chemical weapons attack, compared to what it casts as the Western world’s relatively subdued response to the deaths of between 150 and 200 Iraqi noncombatants in a U.S.-led bombing raid on Mosul in mid-March.

“Media, officials react to Syria ‘toxic attack,’ not to Iraqi deaths,” read an RT graphic this weekend that scrolled across multiple TV reports.

Show us the evidence!

“Show us the evidence” was another mantra of the weekend, with networks pointing to “suspicious” American reliance on secret information to implicate Assad.

Between stories, the network repeatedly ran a montage of U.S. ambassador to the UN Nikki Haley holding up pictures of young children killed in the chemical attack, followed by a soundbite of President Trump referring to the “beautiful babies cruelly murdered” in Khan Sheikhoun. The sequence then cut to a shot of former Secretary of State Colin Powell speaking to the UN Security Council in 2003 and holding up a vial of powder (meant to resemble anthrax), followed by a soundbite of former President George W. Bush warning of Iraq’s vast stockpiles of weapons of mass destruction.

Such a montage aims to remind viewers that U.S. “evidence” of Iraqi WMDs was inaccurate, and subsequently deemed a massive intelligence failure. Further, it suggests that U.S. government officials can – and do – use images to play on the emotions of citizens and conceal lack of concrete proof.

“When we see heart-wrenching images of dying children on our TV screen, it’s hard not to be moved,” a voice off-camera intones. “But we should ask ourselves – are our better instincts being manipulated?”

And then there’s Trump. During the Presidential campaign, most Russian media outlets were staunchly opposed to Hillary Clinton. They often mocked Trump’s various foibles, but when he was elected, the Russian Parliament burst into applause. Since then, he’s been consistently portrayed as a successful pragmatist, a leader with whom the Kremlin could do business.

Now some in Russia are branding him a crazy cowboy.

“Trump – more insane and dangerous than Obama?” one analyst queried.

Even Echo Moscow, an independent radio station and staunch critic of the Russian government, tweeted as its “photo of the day” a caricature originally published by the French satirical magazine Charlie Hebdo. In it, Trump smiles and shoots a mini-missile. The heading reads: “this April, let’s just do whatever we please.”

Other sources cast Trump as a great manipulator, trying to win over critics appalled by his earlier rhetoric of non-intervention. Many suggest that he’s attempting to appear tough on Russia just as he’s facing Congressional scrutiny for his Administration’s alleged Russian ties.

“He’s not the not the first president to use war to deflect from a troubled domestic situation,” a scripted RT piece declared, flashing to a picture of former U.S. President Bill Clinton and Monica Lewinsky.

‘Question More’ – if you’re not Russian

Such coverage of Trump illustrates how Russia’s international media policy expands on its domestic one.

Inside Russia, propaganda functions in a more familiar way, with a government bureaucracy working to ensure that the country’s three major television stations – Channel One, Rossiya, and NTV – produce a united political message about a strong Russian state. (The Kremlin watchdogs are so careful to protect Vladimir Putin’s image that they recently made it illegal to circulate photoshopped pictures of the Russian President wearing makeup.)

But RT – the international network – is ecumenical in its criticism, rather than rote. The network invites guests from all sides, with varying degrees of legitimacy, to air their views. Essentially, they provide a forum to sow almost any kind of doubt about the American status quo. It’s not about controlling a message as much as it is about confusing whatever messages are put out by Western – especially American – authorities.

Labeled by U.S. intelligence organizations as a Russian propaganda weapon, RT nevertheless casts itself as a voice dedicated to helping viewers become less gullible media consumers. It has even volunteered to help Facebook fight “fake news.”

If it is a weapon, then, it operates by encouraging a lack of trust in the institutions and ideals of a Western-led world order, all under the guise of independent thinking. At the same time, its anchors are quick to shut down or redirect any statements that call Russia’s actions into question. When, for example, CNN ran a story about a Pentagon investigation into possible Russian knowledge of Assad’s chemical attack, RT mentioned CNN’s coverage – but only as an example of Western bias.

U.S. and Russian journalists both claim to champion the right to criticize, to challenge authority, and to investigate potential wrongdoing. However, only one country’s major media outlets seem interested in holding leaders accountable to the same degree both at home and abroad. Dependent on Kremlin patronage, Russia’s domestic media, with a few courageous exceptions, work to reinforce Kremlin power.

RT goes a step further, seeking to turn the strengths of liberal democracy into vulnerabilities. Its programming demonstrates how the right to question authority – an essential pillar of an open society – can also be “weaponized” by those who are prepared to exploit freedom of speech to undermine their rivals.

Cynthia Hooper is an Associate Professor of History at the College of the Holy Cross. This article was originally published on The Conversation. Read the original article. 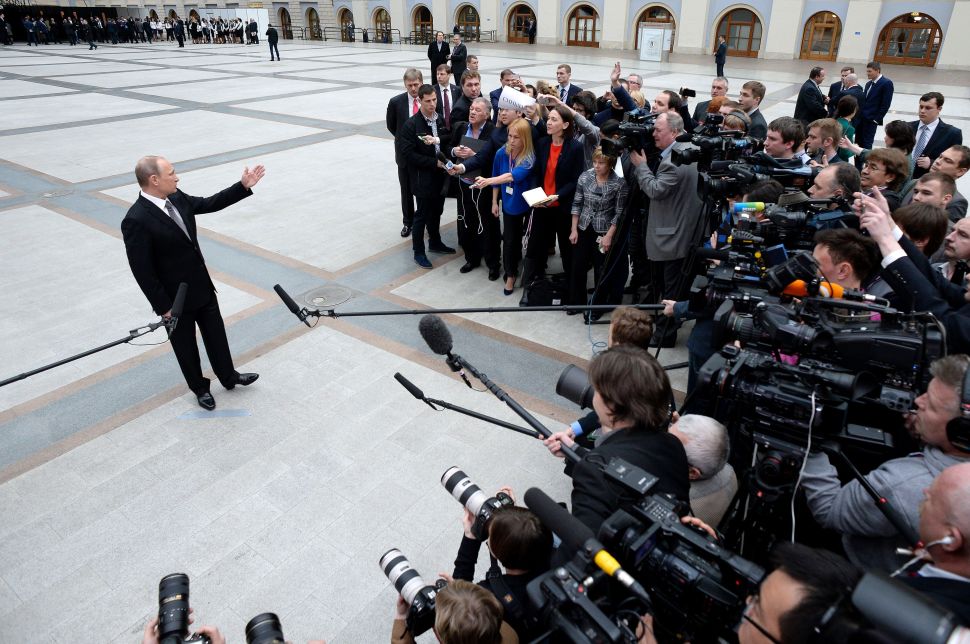