With their 2014 debut, Sun Structures, Ketterinng, U.K.’s Temples proved they could write strong songs right out the gate.

But in an age when “psychedelia” has become an ad hoc branding descriptor for festival readiness, when an all-consuming British music press anoints another young promising group with “Best New Music” status with such frequency that even the lauded bands become innocuous, Sun Structures landed on some ears as just more product, despite the sure signs that Temples’ craft and attention to detail placed them at the top of the heap.

How does any band follow that up? With a wryly subversive album trafficking in theatrical, technicolor platitudes of rote psychedelic imagery, duh!

Released in March, sophomore album Volcano speaks of bridges and horizons, parallelogram planes and silver limousines. There may even be a Tame Impala nod in there, done with love, of course, if you listen closely.

“Ah, Justin. I’d like to greatly thank you, because I think you’re the first person we’ve ever spoken to who’s completely got what we were trying to do,” bassist and songwriter Tom Walmsley tells me in our candid conversation. “This record, people think we’re talking about volcanoes and nature and destruction as these big, abstract kind of images, but you’re absolutely right. It’s intentionally subversive. We’re almost referencing ourselves a little from the first record, and detaching ourselves.”

Leave it to the rest of the press to read things in a straight line. If the idea of a psychedelic experience used to be sacred, marketing departments have long destroyed any capacity for epiphanies or profound realizations by turning the term into an aesthetic descriptor. It’s a testament to Temples’ level of craft here, that the satire remains lost on so many.

Observer’s chat with Walmsley about parodying ego, tempeh cheeseburgers and The Mighty Boosh hints at the profound exercise in humorous self-reflection that happens on Volcano, and wonders why the music gentry at large remains so unaware of its winking whimsies.

Is it Tom or Thomas?

You can call me Tom, yeah.

You can call me Al.

Right on, man. I think of Drozd from The Flaming Lips when I consider your role in Temples, because he’s also a founding member, bassist, and key composer to the songs. Are you something of the de facto bandleader like him as well?

[Laughs] Well first of all, that’s a great compliment, so thank you. Steven’s an integral, critical part of that band. I could only hope to aspire to perhaps be the foil he is to Mr. Coyne. But I don’t know.

That question may be my roundabout way of getting to learn how much you’ve had a say in things, because I have a lot of questions about theme, imagery, and lyrics on this record. Or if you were primarily more on the music end of things?

Personally, I’m probably less musical, or certainly as much as they’re musical, I very rarely rest throughout the whole creative process. Seeing the bigger picture, more than anything, you have to be that guy at the end of the rope to pull up anyone who’s gone too deep into writing a chord progression of a chorus, you know. And we all take turns in doing that.

I certainly wouldn’t say it’s my duty, or define myself doing it more than anyone else. When you record yourselves and produce the record yourselves, you have to remove the blinkers for a second and check that what you’re doing makes actual sense, that it works as a whole. I value that greatly, and I think it’s important that is always apparent, that you can always question it. It’s hugely important in our creative process.

Not necessarily too common among British bands right now though, that level of mutual exchange. I’d reckon maybe you guys and Ultimate Painting are the two examples of creatively cogent bands where the music shows the players in dialogue with each other. That’s almost a Canadian trait, the collective mentality. Bands like Godspeed! You Black Emperor, Broken Social Scene, Wolf Parade…it’s almost band socialism.

Yeah. There’s a Canadian guy I heard recently, Max Schrager, he released an EP recently called Thoughts of You and it sounds incredible. It’s a really personal record, and it’s a beautiful thing, if you have the gift, to record yourself and have it turn out O.K.

That’s really what inspired us to be a band in the first place. We were just a studio project, more or less, and everything else came after. And people like ELO are self-produced, Alan Parsons Project, Utopia, Genesis and the Peter Gabriel stuff, usually Todd Rundgren, Brian Eno…they all had a hand in the bigger picture beyond just writing songs.

The most celebrated Beatles music was never really designed to be played live.

Absolutely. I think you’re really one type of band when it comes to that, you know. And in this day and age, it’s harder to be perhaps just one or the other.

That’s where festivals come in. You guys play a lot of festivals, and branding or beer advertisements aside, you can exist in multiple contexts. If you come in studio-ready, quick load in, load out, ready to go, you can play your weird fuckin’ music for people and they don’t need to try and codify it. It hits them right away.

Yeah [laughs], and it gives you the freedom to be something else when you play live. That’s a real great opportunity, you know, to extend what people consider you to be. You can over-exaggerate and over-embellish stuff live, really dig in. It’s something I’ve definitely come to grips with now, more so than a couple of years ago.

There’s more breath on Volcano, more space between the notes. And thats the space where those things can happen live.

Yeah, it was a record definitely influenced by that instantaneous thing you get when the sounds hit you live. We wanted a record more like that than a timepiece encapsulated in one LP. More individual shots of songs.

“This record…[i]t’s intentionally subversive. We’re almost referencing ourselves a little from the first record, and detaching ourselves.”

You mention sound, and so I have to ask—who’s Mr. Sound?

I suppose that’s kind of a modern-day allegory, a fictitious character who seems like a good vehicle to get across the message in that song, [“Oh! The Saviour”]. It’s a song bordering on addiction, and we all know someone who maybe takes it a little far occasionally. Without getting too hedonistic and rock ‘n’ roll here, it kind of addresses that, and the futility of involving oneself in excess.

The volcano comes into that song too, maybe not explicitly, but through images. I thought of Warner Herzog, but I also thought of Scientology, because Xenu drops the souls of past lives into volcanos or whatever. But James says in the first song, “I’ve got a picture and a detail,” and there’s a ton of world building on this record. The volcano in “Saviour,” sure, but also landing on a parallelogram, the waves, tons of concrete imagery. You guys seem to consciously be playing around with common motifs in psych music, but subverting them or using them to another effect. Were those conscious nods to Floydian abstraction intentional?

Ah, Justin. [Laughs] I’d like to greatly thank you, because I think you’re the first person we’ve ever spoken to who’s completely got what we were trying to do. This record, people think we’re talking about volcanoes and nature and destruction as these big, abstract kind of images, but you’re absolutely right. It’s intentionally subversive. We’re almost referencing ourselves a little from the first record, and detaching ourselves.

Like “I am fire, I am the Saviour, I am the Parallelogram”?

Yeah. We’re mocking that whole thing to some degree, but also using it in a theatrical way, detaching ourselves from what people defined us as with Sun Structures and using it to provoke, and hopefully make a more direct message, rather than just mood-boarding images. Songs like “Mystery of Pop” and “In My Pocket” are intentionally aloof, and almost satirical, really. I don’t know if that part has passed over.

Intention gets buried sometimes between the inception of an idea and its execution. Not sure if that happens here or not, though. There’s this recurring joke in interviews of mine where the word “psychedelic” becomes meaningless, a lead line for young journalists who still party a lot, perhaps, to write their opening paragraph in a way that adds a sense of faux-mysticism to their own writing. You even have that jokey Tame Impala reference in that song, and you and them are both kind of blurring the lines of psych by making music that’s deliberately poppy, in a way, and also kind of weirder than the rest of it. The genre falls off the bone at some point.

Yeah, instead of going into the euro-dance territory that you could say Tame Impala went down, we’ve gone down the over-indulgent route. If there’s synths on our record to some people’s dissatisfaction, they’re there intentionally because the song’s about something superficial and vacuous.

And that speaks for every song. If it’s something quite stark to the point where we’ve stripped it back completely, whatever the song’s required us to do, we’ve arranged the instruments to kind of reflect that as well. No one track on the record defines our new sound, or whatever that would be.

Now that we’ve acknowledged there’s some humor or satire on this record, I’ve gotta say…Mr. Sound reminds me of The Mighty Boosh.

Have you ever considered going full Boosh?

Um…it would possibly be to our detriment, to be any more Boosh. But as far as being a British comedy about ridiculousness, that’s something we like and sympathize with. Yeah, is that retro yet? What is it, 10, 15 years old?

It’s become enough of a cult thing, at least here in the States, to the point where it’s bled into mainstream comedy. I’m just thinking about how U.K. music press is such a gargantuan machine, and touring such a gargantuan infrastructure. You guys have had that going for so long, some of it needs to be parodied. And you can’t have soccer hooligans like Noel Gallagher as your main critical bellwethers.

Yeah, there’s not many people doing that at all over here. Either you’re a gargantuan, successful guitar band or you’re down below with the rest of us. It’s a strange climate for music over here. Whenever we go over to America we always feel like neither of those things, really, but somewhere on one of the many rungs in between. It sometimes feels more acceptable to be who we are in America. I don’t know if it’s a transatlantic thing, or if it makes more sense to audiences over there, but it’s interesting.

Take us to any vegan cafe that does some fake bacon in the shape of a cow. There’s this great place called Sage in Echo Park that has amazing tempeh.

Tempeh’s great, and really versatile. You ever had a tempeh cheeseburger?

I have not, that sounds very American. [Laughs] 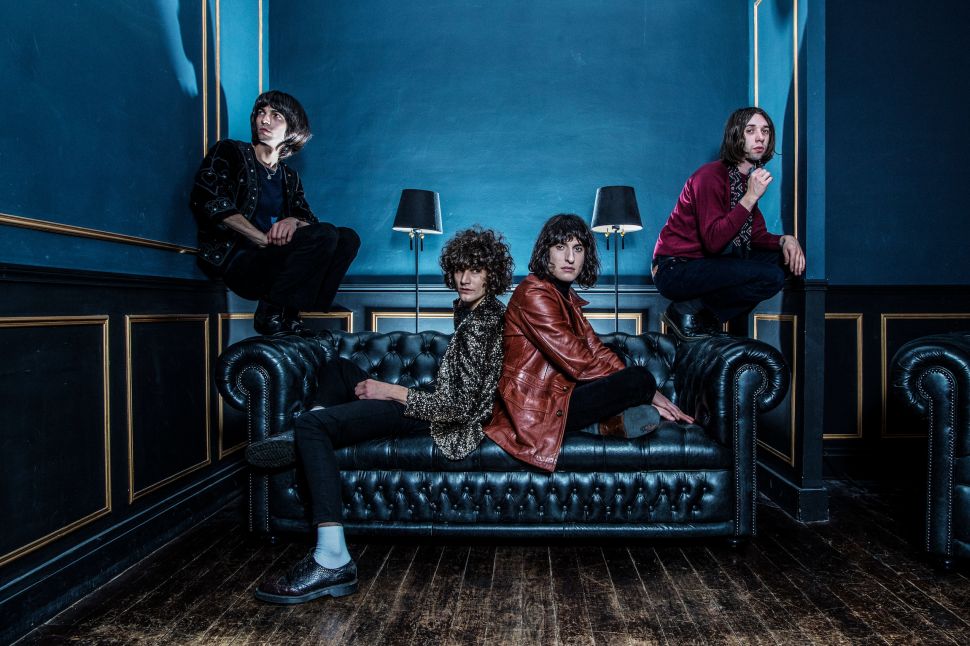