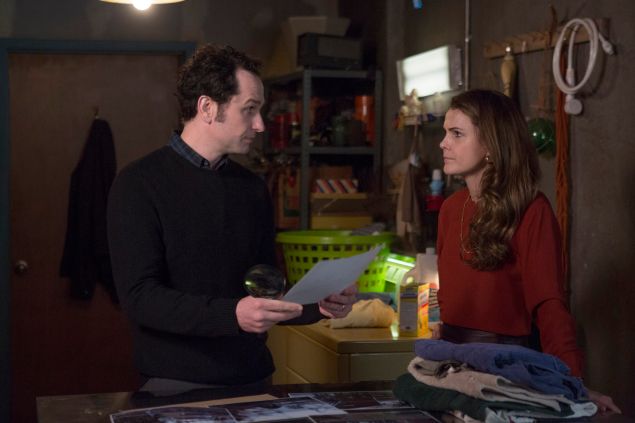 The Americans is a great show for faces. Most great TV dramas are, of course—to name two currently running examples, if you can think of Better Call Saul without mentally counting the crags in every Jonathan Banks closeup or talk about The Leftovers without describing the way Carrie Coon choreographs her eyes and lips and brow in a complex dance of grief, just go ahead and delete those shows from your watchlist. But those shows’ warm and expressionistic lighting transforms those faces into works of art. The Americans is all about the gray-white light of a suburban afternoon or the harsh fluorescents of official spaces. Faces here look raw, inseparable from the physical reality of the human beings beneath them. When Paige Jennings tears up in “The Committee on Human Rights,” this week’s episode, because she’s dumping her boyfriend, it’s an action she doesn’t really know how to do, over reasons she doesn’t really know how to explain to herself much less to him. In those moments, her baffled but resolute face is recognizable to anyone who’s shared that terrible into-the-void pain. When Matthew Beeman stares at her, eyes growing dull with confusion and shock as he offers to do basically whatever she wants to keep the relationship going, you recognize that too. When Stan Beeman’s face lights up because his friend’s life has been spared and his boss has unexpectedly gone to bat for him, you really do see a guy who just got good news at work. Does this make sense? There’s something unadorned about The Americans’ faces, is what I’m getting at. They’re not staged for us. They feel more like something we’re peering through a window to see.

Which brings me to my favorite face of all. Matthew Rhys is such a pleasure to watch in this thing. Counterintuitive, I know, given that his job requires him to look constantly miserable. (It’s what made his cameo as a sleazy hotshot novelist during the final season of Girls such a perverse thrill: Finally, we get to see him enjoy doing terrible things instead of moping about them!) But within that range of facial expressions that stretches from exhausted to nauseated he’s able to locate so many variations and nuances. Other actors are a 12/3/6/9 wall clock with an hour hand and a minute hand; he’s able to pinpoint fleeting emotional beats to the millisecond.

The finest such act of calculation in this episode comes when he and Elizabeth travel incognito to Memphis to spy on Stobert, her do-gooding grain-scientist target over the past few weeks. He may want to save the world, but it turns out he does not want to save himself for Elizabeth’s sexy bespectacled alter ego—he’s on a romantic rendezvous with another woman. “Who’s she?” Philip asks, the amusement-tinged surprise in his voice coming through loud and clear. “Don’t know,” Elizabeth responds, clipped and a bit confused. And as they exit their phone-booth vantage point and the shot itself, the ghost of a grin flits across Philip’s face. He’s known that Elizabeth liked the guy for some time, even as she herself denies it, and moreover there’s every reason to believe he’s sincere when he tells her “It’s okay to care”; his relationship with Martha is proof of that. But that doesn’t mean he’s above taking some small satisfaction from the revelation that his romantic rival has a wandering eye and thus feet of clay.

Philip’s big showcase, however, comes later, during his climactic conversation with his retiring handler. Now, I’m Team Gabriel over Team Claudia, on the record and all the way. I like Frank Langella’s work with the character; The Americans has plenty of tightly wound hardcases with or without Margo Martindale’s secret agent, but Gabriel is the only sad-smiling older-and-wider type it’s got. Seeing his ostensible final scene with Philip, I realize they’re cut from the same cloth just as Claudia and Elizabeth are. The latter two suppress their emotions, cut them off, deny them, with Claudia much farther down the road toward doing away with them as a practical matter all together. By contrast, Gabriel seems like a model Philip would want to follow should he continue in his current line of work into old age: He hasn’t switched off his grief, rage, disgust, longing, sadness, and so forth so much as slowly whittled them down to a manageable size—a pebble in his pocket worn smooth from habitual handling, rather than a millstone around his neck dragging him down with it.

This is why his final exchange with Philip comes as such a shock, complete with a dumbstruck Matthew Rhys reaction shot and a heavy hit from the score. At first their meeting is as pleasant as Elizabeth’s was—moreso, even, given the happy resolution of the Great Grain Robbery and the fact that the two men have put aside their past differences, earning the fond goodbye that Elizabeth could take for granted. But things take a turn when Philip learns that the files his wife stole from a psychiatrist’s office earlier in the episode contained the names not of rival spies, but of an organized political opposition group within the Soviet Union itself. For Philip, whose patriotism at this point boils down to cracking jokes about heroic farmers on propaganda posters and lying to his daughter that the Americans were trying to poison his country to death, this is the signal to start going down forbidden roads. “You said when you were younger you did terrible things,” he says to Gabriel. “What terrible things.” It’s barely even a question, the way he says it.

Gabriel’s reaction is a wonder to behold. It’s not that he reveals anything particularly outrageous—we all know the nature of those terrible things, even Philip does really—or that he gets terribly worked up while he talks about them. It’s in his body language after he says “Well, it was bad. Worse than you can imagine.” The words seem to unmake him, somehow, removing some vital component that kept him standing straight. His face turns this way and that, he doesn’t seem to know how to hold himself in his chair or what to do with his long limbs.

But it’s when Philip asks if the KGB has provided Stan Beeman with his new girlfriend that Gabriel really loses it. Maybe he resents the implied connection between what he did, and what was done to him, back in the day with what comparatively pampered people like Philip and Stan are going through. Maybe he’s just sick of all of it. But he lets Philip have it, certainly. “Are you serious? You’re losing it, Philip.” When the younger man presses, Gabriel says no, Renee’s not one of us, but he admits almost sardonically that “It’s possible the Centere wouldn’t tell me because they knew you would ask me this question.” This realization more than anything else seems to trigger his final words to Philip: “You were right about Paige. She should be kept out of all of this.”

Philip is stunned. After years of fighting the Centre’s directive, his mentor and minder admits he’s right, just as he’s leaving and is no longer in any position to do anything about it? If Philip had heard the rah-rah pep talk Gabriel had given Elizabeth on the same subject earlier that day he’d be even more blindsided. The Beeman business may have struck Gabriel as a farcical concern, but in ending his relationship with Philip on this particular note, he’s acknowledging that what they’ve done with, and to, Paige is one of those terrible things he’d prefer to have left in the past. Well, now it is in Gabriel’s past. But for Philip, this is the present, and its inescapability is written all over his miserable face. 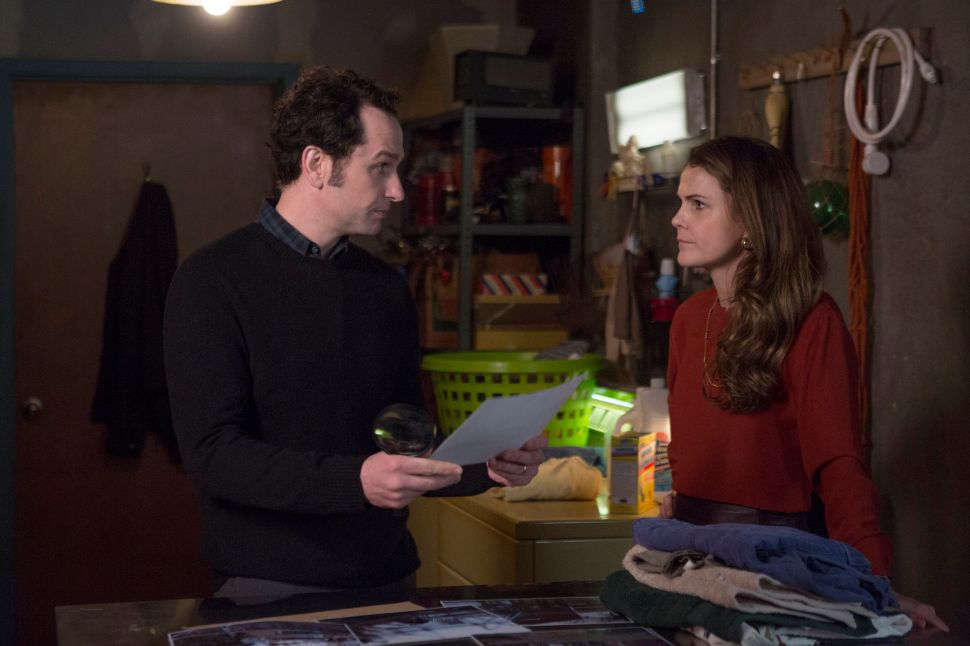