We’re watching you. The paranoia about modern technology and its hand-in-glove relationship with the totalitarian state is as old as George Orwell’s 1984 (published in 1949) and as slick, glossy and star-driven as James Ponsoldt’s Dave Eggers adaptation The Circle. This appealing and slightly drafty drama puts pixie millennial Mae (Emma Watson) at its center.

Mae’s a smart young woman, working as a contract help-desk jockey while still living with Mom and Pop (Glenne Headly, Bill Paxton). Brrrinng. Her manic BFF Annie (Dr. Who‘s Karen Gillan) calls with the chance of a lifetime: an interview at a Silicon Valley tech company called The Circle, which, of course, Mae aces. She’s just that perfect combination of idealistic, enthusiastic, self-searching — and post-college desperate for a meaningful existence with health insurance attached. Been there; got crushed, too.

Once on the tech giant’s campus, Mae comes under the sway of the swami founder, Bailey (a spot-on Tom Hanks). He winningly paces the stage at the utopian company and preaches Ted-style sound bites like “knowing is good but knowing everything is better.” Maybe not but no one contradicts Bailey as he introduces the company’s latest product: a marble-sized sticky camera that can be placed anywhere, see everything. It’s to Ponsoldt’s credit that he doesn’t undercut these upbeat, high-energy early scenes with dramatic dum-dum-dum foreshadowing. I worked at Yahoo for Marisa Mayer, who fucked up and walked away with a golden parachute estimated at $185M while all I got was a purple T-shirt. I know the dark side of the Valley – and it often has a very shiny face.

Let’s begin with the praise: Ponsoldt excels directing women (consider Mary Elizabeth Winstead in Smash or Shailene Woodley in The Spectacular Now). The Circle is a female-driven story set in a male-dominated industry. Watson delivers a layered performance scrubbed of Harry Potter Hermione magic. She’s fresh and draws the lens to her, delivering lines in an easy, believable, American vernacular. Tracking Mae’s moth-to-the-flame plot trajectory – the newbie ascends to company spokesperson by opening up every second of her life to public scrutiny with a personal body camera — she hits her beats. The British actress radiates honesty and integrity and idealism, and the kind of naiveté that’s just begging more cynical beings to exploit it. She’s also ambitious and driven enough to fall right into the net.

Ponsoldt surrounds Watson with a stellar cast  bending towards naturalism in a world that’s increasingly plasticized by the distancing effects of social media that on one hand creates a false sense of intimacy while neglecting the face-to-face human connections still preferred by some.  Bill Paxton, as Mae’s father, stricken by MS and still struggling toward joy and dignity is particularly touching, a performance that becomes even more affecting in light of his recent passing. Ellar Coltrane, the boy inBoyhood, is a grounding element, always committed to the moment, as the local pal Mae rejects for his apparent lack of ambition. The gawkily-handsome crafter of deer-antler chandeliers is old school, Mae deludes herself. She’s the future.

And, yet, there are undercooked elements. Mae meets Ty (Star Wars‘ John Boyega) at her first company mixer. He’s another individual who hangs out at a party’s fringe rather than throwing himself into the mosh pit at the corporate Beck concert (and, yes, that’s the singer-songwriter on stage). But, it turns out, that Ty’s the legendary genius behind the company. Now, he’s skulking around, all but screaming there are flying monkeys in this Oz. Although he’s the putative love interest, there’s no time allowed for a romance to ferment, or a satisfying end point for their apparent connection, or real development for his character. Flag this as a lost opportunity.

The biggest flaw is that the movie unravels at the end, asking more questions than it answers. An ass requires kicking — hard – after all the build-up. The toppling of Bailey and his sidekick Stenton (an underused Patton Oswalt) doesn’t entirely satisfy because the issues are societal and spreading. The cancer has metastasized beyond the point where excising a few tumors has impact. When does the value of transparency and infinite human interactivity via social media succumb to corporate greed and the all-seeing company’s data-mining for profit? Caring is sharing – but sharing our most intimate secrets with a greed-driven corporate culture is a recipe for disaster that threatens individual freedom, another example of America’s penchant for brilliant innovation corrupted for capitalistic gains. 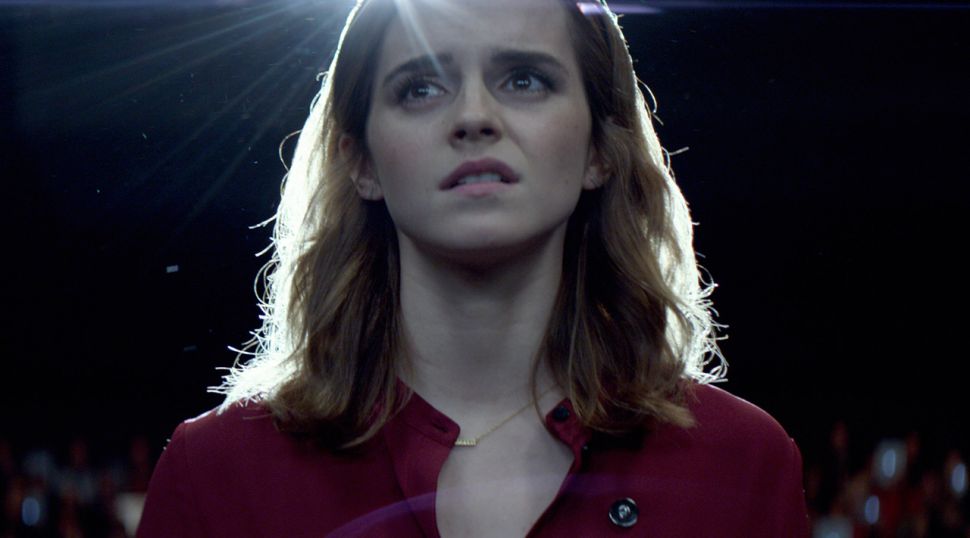