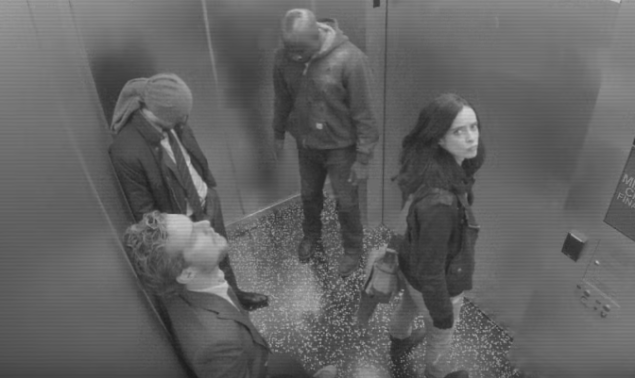 Just because Marvel’s Iron Fist landed with the force of Danny Rand’s baby punches doesn’t mean the hype-train isn’t primed and ready for Netflix’s super-powered team-up, The Defenders. Today, the streaming network released a brief teaser trailer that packed a lot of info and intrigue into its 16 seconds.

The teaser sees the four heroes of Netflix’s Marvel Universe–Matt Murdock (Charlie Cox), Jessica Jones (Krysten Ritter), Luke Cage (Mike Colter) and Danny Rand (Finn Jones)–piling into an elevator at the offices of Midland Circle Financial. They look exhausted. Danny Rand looks the most exhausted because of course he does. Matt Murdock seems to be the only guy at the office who dressed up for the Halloween party. After a moment, Jessica Jones rips the security camera from the ceiling, as Jessica Jones is prone to do.

The IP address in the opposite corner directs to the website of the New York Bulletin, familiar logo and all. First on the docket is a video interview with the Meachum siblings, Joy (Jessica Stroup) and Ward (Tom Pelphrey).

“Given that the last two CEOs of Rand met with an untimely demise, do you have any concerns about allegations that Rand is cursed,” an interviewer asks the siblings off-camera. Hard to say whether this comes before, or after, Ward Meachum shot his reincarnated father Harold (David Wenham) in the head during Iron Fist‘s finale.

At the bottom of the Bulletin’s homepage is a series of covers. The first concerns Midland Circle Financial itself: 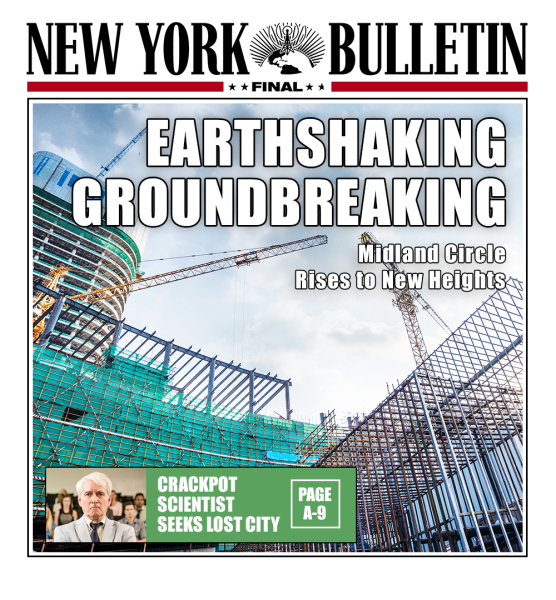 Midland has existed mostly in the background of Daredevil until now, mostly as a construction site boring into the bowels of New York (at the behest of ninja cult, The Hand). Why? Sort of unclear, like everything The Hand does, but last we met them the organization was sticking the corpse of Elektra Natchios into a mysterious, occult-looking…thing, and making secretive lunch-time deals with Danny’s former friend Davos (Sacha Dhawan).

Also of  note, the “crackpot scientist” seeking a “lost city.” As far as lost cities go, Danny’s home-away-from-home K’un Lun was even more lost than normal the last time he and Colleen Wing checked.  It’s though, because Danny seems to have settled into corporate life… 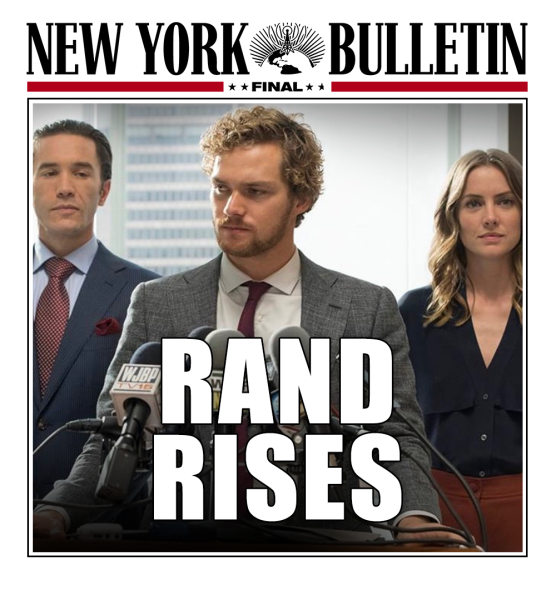 …which is pretty much the exact opposite of where Luke Cage has found himself. 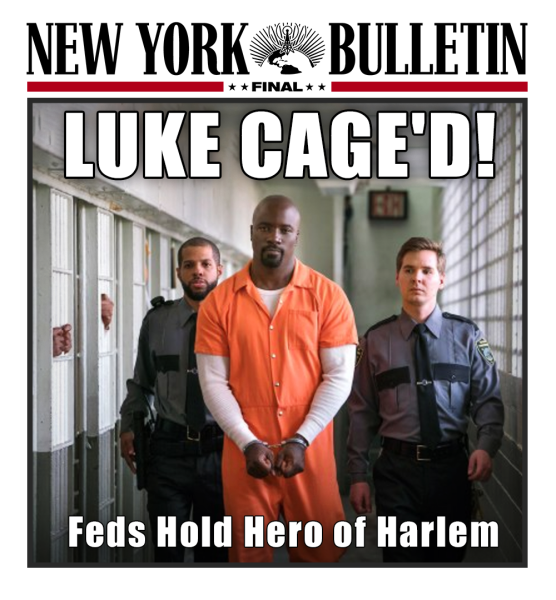 Two things worth noting: 1) According to the original teaser video, come Defenders time the Feds are definitely not holding the Hero of Harlem anymore, and 2) Cage looks like was locked up in the same prison as Wilson Fisk (Wilson D’Onofrio), in a nearly-identical cell-block to the one where Frank Castle (Jon Bernthal) killed…a lot of dudes in Daredevil‘s “Seven Minutes in Heaven.”

But Frank Castle is currently AWOL, as is, according to The Bulletin, Daredevil himself: 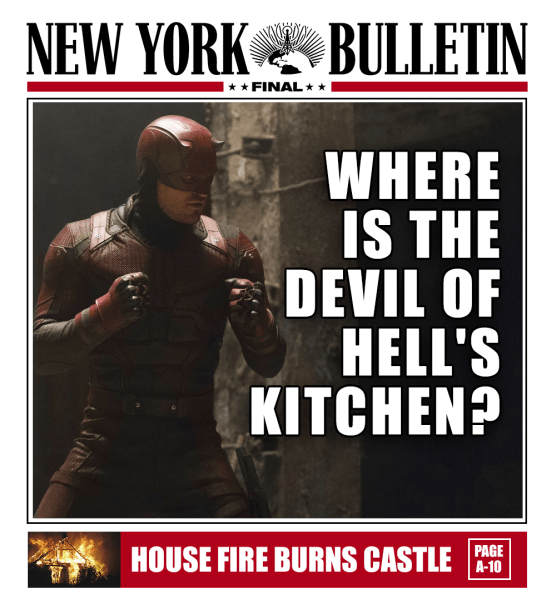 Sometime between Daredevil‘s second season and The Defenders, Matt Murdock seems to have ditched the classic Devil-red for his old, trusty head-scarf, although it’s unclear as to why. Not unclear? The Bulletin isn’t above puns, even when it comes to the destruction of property; “House Fire Burns Castle” refers to Frank Castle returning to the home of his murdered family and setting it ablaze.

Finally, the scantest of updates on what Jessica Jones has been up to: 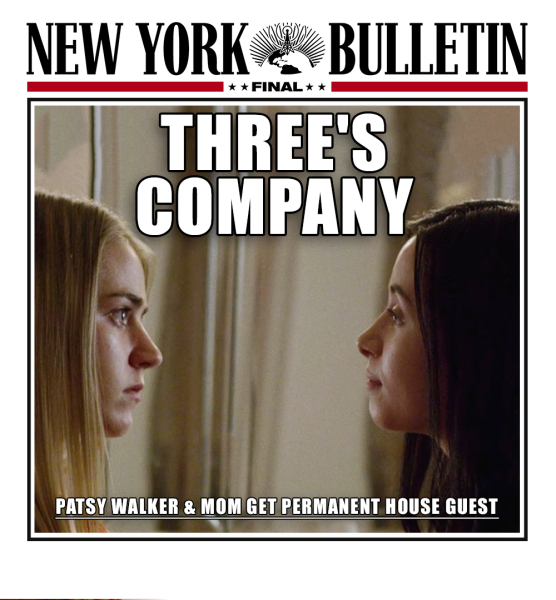 In Patricia “Patsy” Walker’s (Rachael Taylor) original, comic-book background her transition into the superheroine known as Hellcat has a whole lot to do with her abusive, controlling mother. In what must have been a hell of a slow news day in New York, The Bulletin‘s cover chronicled the day “Patsy Walker and mom” got a new house guest: Jessica Jones. 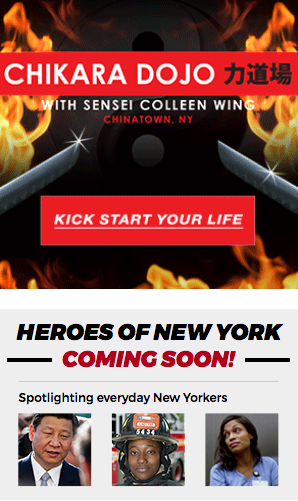 Finally, in the interest of mining every detail possible from a 16-second teaser trailer, I noticed Jessica Jones knocks out the security camera just as the elevator reaches the 41st floor. Here is the cover of The Defenders #41. 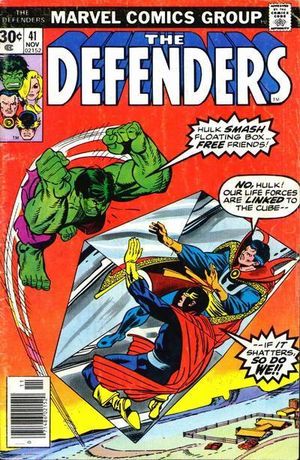 That’s right: The Hulk, Doctor Strange and Nighthawk all confirmed* for The Defenders.

[*Not confirmed. Not even a little.] 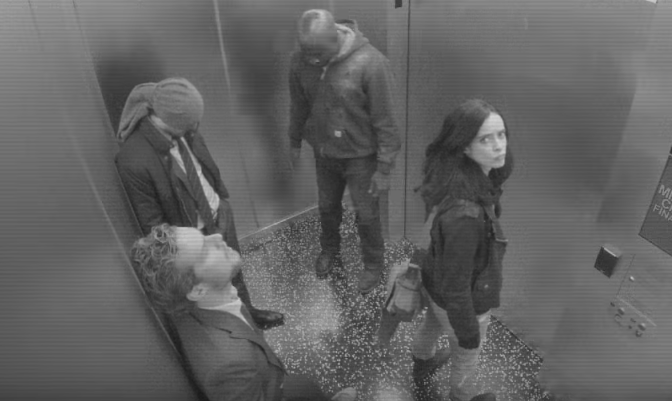