Tonight, on The Good Fight finale: is Maia Rindell a real lawyer? Or will she be unmasked as two kids under a trench coat, with no hope of understanding the concept of “conflict of interest?”

We open our tale at the Reddick, Boseman, Kolstad offices, where the associates are getting their progress reports. Maia is instructed to be bolder, and to follow one of the partners around for twenty-four hours at some point soon, without taking no for an answer. She immediately goes to lie down, after asking everyone in the office if they hate her. In contrast, Lucca got a great review: she’s getting a new office and moving to the partner track. To make Maia stop spiraling, she agrees to represent Maia if she ever gets indicted on charges for the Rindell Foundation.

Elsewhere in the office, there’s a familiar face waiting in the lobby: Dylan Stack (Jason Biggs), who we met in The Good Wife has a case he wants the firm to take on. He claims he’s being set up for cyberterrorism, that somebody put a code on his laptop that’s going to cause a Chicago blackout in a number of hours. He came to the firm because he wants to offer the Feds his decoding services, but only if they give him immunity. If they refuse, he wants his identity kept secret so that he can’t be prosecuted either way. Definitely sounds like an innocent person who is totes being framed, and we should all rest easy. The partners have Lucca reach out to the Department of Justice through Morello, and the two have a delightful little conversation about their breakup — was it a breakup? — that’s definitely not a conflict of interest. Once she’s explained the situation, he asks to keep thumb drive that Mr. Stack brought to RBK, and she lets him. Morello takes the thumb drive to his boss, Wilbur Dincon, and although he doesn’t name Lucca, Dincon seems to know exactly who brought in the thumb drive. Ruh-roh.

Meanwhile, elsewhere in that same office, Henry Rindell is having some very frank conversations about his fate. He’s told his best possible option is a plea bargain that would give him thirty-five years and follows that revelation up with an ominous phone call in the hall, during which he says, “You told me to call if it ever got to that point. I think it just got to that point.”

Speaking of phone calls, Diane gets one from the hospital that Kurt was in a car accident, and books it out of the office to go check on him. It turns out he’s fine, and was just somehow involved in a car-jacking, but it means she isn’t at the office when Dincon and his men show up to detain Lucca. Maia is, however, and she’s been spending all day mulling over her “be bolder” instructions, so she squawks harmlessly at them as they take away her colleague, bursts into a meeting to tell them that Lucca is being targeted because they want her to give up the name of her client, Dylan Stack, and decides that today is the day she should follow Adrian Boseman around, as he heads to court to defend Lucca. So far, survey says…no actual law has been practiced, so…two kids under a coat.

Over at the Rindell Mansion, we’re seeing the results of that phone call Henry made: a guy shows up, collects some money, and says he’ll be back to spirit Henry away at 8:00. He’s specifically instructed that he can’t say goodbye to anyone, so he immediately calls Maia and tries to get her to come over for dinner that night. I CAN’T TELL YOU WHY, BUT IT’S REALLY IMPORTANT. MAYBE I JUST REALLY LOVE MEAT LOAF, YOU DON’T KNOW. During Henry’s “last-ever” walk with the dog, and after stroking Lenore’s face and telling her he’s “glad he married her,” just as you do on a normal day when you aren’t skipping town, his lawyer shows up and drops a bomb. The reason the thirty-five-year deal is good is because they have something on Maia from that proffer session with Jane Lynch. She could get as much as five years for perjury, and the lawyer is getting pretttttty judgy with Henry for not snapping it up right away.

Meanwhile, back in the main storyline, the initial judge granted Lucca’s release, so now the DOJ is prosecuting Lucca as a co-conspirator in cyberterrorism, and they’re going up against a really unfriendly judge: Judge Kassovitch. Boseman is hoping that this whole situation can get erased just by Dylan Stack coming forward and dropping his own name, so Lucca doesn’t have to. He’s not super excited about that idea, and it seems like it might be because he’s involved. Marissa and Jay discover that the person Dylan suspects of being the actual culprit is Felix Staples, that Bizarro World version of Milo Yiannopoulos that we met before, and this feels like the right moment to say that just once, I’d love it if Jay solved something completely on his own instead of Marissa having a brilliant and unearned idea at the last minute. Anyway, carry on. Diane goes to talk to Felix and he says it’s not his hack, but yes, he did encourage someone to do it. He agrees to meet up with whoever the person is — he doesn’t know, because their username keeps them anonymous — tonight in exchange for being represented by Diane.

Oh and speaking of Diane, she’s real juicy for her marriage now, ever since she discovered that the carjacking Kurt casually mentioned earlier was actually an attempted kidnapping, which he single-handedly stopped. And the video’s online.

In court, the prosecution puts Morello on the stand, which is how the defense comes to find out that when the DOJ went to check the thumb drive, it actually installed itself on their servers — duh — bypassing their firewall, which really does make it seem like Lucca was intentionally involved, even though we know she wasn’t. But Boseman decides his only recourse is to cut Morello down on the stand and make it look like he’s framing Lucca to get back at her for dumping him. Because finally, we’re addressing issues of conflict of interest that have been present and ignored all season. Boseman storms back to the office to accuse Stack of using them as a Trojan horse to deliver the malware to the Feds, and is so busy yelling at his client that he’s not in court when it starts back up. Maia has to take the rebuttal witness, Felix, who testifies that Lucca was an “unwitting mule,” the only time that phrase has ever been positive. Felix tries to prejudice the judge against Felix by pointing out his Anti-Semitism, but Maia gets all fucking BOLD in the courtroom and shuts him down.

She was apparently so successful that they canceled court early and let everybody go home because she makes it to her parents’ house early, where Henry makes a phone call accepting the deal. He says he’ll self-surrender later that night, but you gotta assume he’s still gonna make his getaway, and presumably, the deal will go out the window for Maia once he peaces out. Everybody’s having a great time at the house, laughing and reminiscing, and the call comes in for Henry to get picked up. It’s being phrased like it’s the car to take him to his self-surrender arrangement, but I’m not convinced. While they wait for the car to show up, Henry finally admits to Maia that he, Lenore, and Jax are all guilty and that they paid off the SEC. He apologizes to her, she forgives him, and then he GOES OUTSIDE AND GETS IN THE CAR WITH THE DAMN BAD MAN. Oof, that is ice cold, but I knew it.

Meanwhile, Felix lures the real culprit to a Chinese restaurant, only to find out that it is, of course, Jason Biggs. The Feds come in to scoop him up, but no one has been smart enough to actual disable the blackout, so it kicks in right as they’re putting him in handcuffs. Morello frees Lucca, she tells him she knows he wasn’t responsible, and I can’t imagine why he would possibly care.

And finally, in the only part of the storyline that actually had an emotional effect on me, Diane drives Kurt home from the hospital and is obviously teetering on the brink of getting back together with him. She leaves the car idling in his driveway and he invites her to stay the night. She says she was really hurt and he says it won’t happen again, and then she turns and walks away like the woman of steel she is. EXCEPT! She was actually just going back to turn off the car and come inside, and the look that she gives him before they walk inside together crystallized my soul it was so good. I’ve said this one million times, but Christine Baranski is my queen, and she plays my emotions like a puppet master. I shed genuine tears just from that look of vulnerability and bruised trust.

And over at Maia’s, I’m about to feel the exact opposite, as she and Lucca are having blackout wine when a knock comes at the door. It’s the Feds, placing her under arrest because her dad fled — again, duh — and the look on her face makes me feel nothing. Tune in next season to see how the two kids under the trenchcoat respond to jail food and if they are mad at their dad! 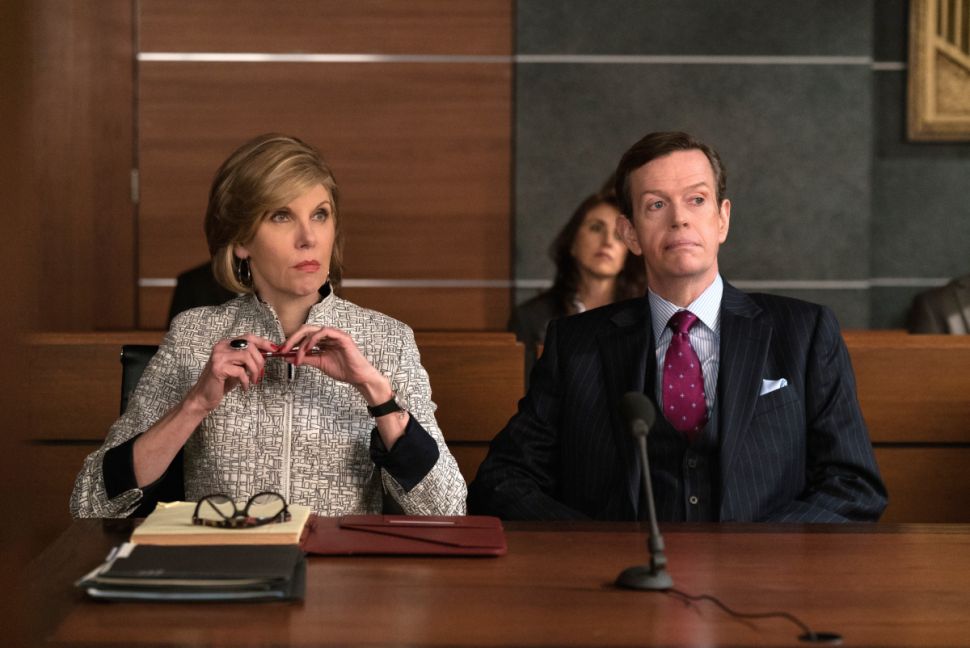