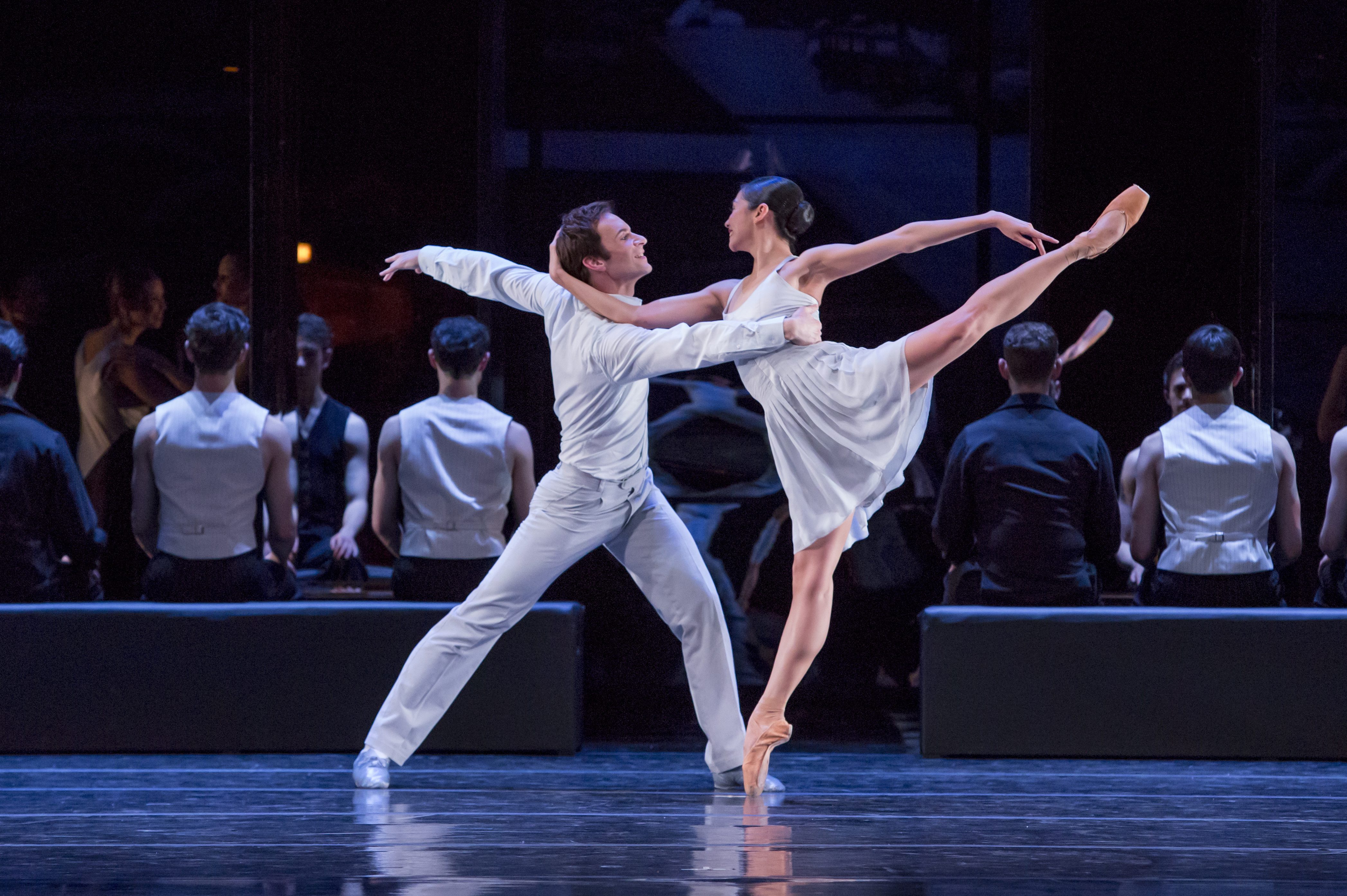 The Joffrey Ballet has a long and honorable history, but that was then and this is now. The glory days—Joffrey’s own interesting works, Twyla Tharp’s Deuce Coupe, valuable Ashton and Massine revivals, Kurt Jooss’ The Green Table—made the company a vibrant part of the New York dance world: not even the early ballets of Joffrey’s partner and successor, Gerald Arpino, could sink the ship. And then Joffrey died, Arpino took complete charge, and the rest has been disaster—or, worse, irrelevant. Off to Chicago the company went, and after various ups and downs attracted an audience for itself. But then Chicago is not famous for being a dance city.

After twenty years in the ballet wilderness, Dolly’s back in town (or just was), presented by the Joyce at the Koch and bringing us six performances of Romeo & Juliet plus a single mixed bill for what was optimistically called a Gala. Whether Romeo or the Gala was the bigger blunder is a toss-up—let’s call it a tie.

Maybe the best way to describe the Joffrey’s Romeo, staged by the well-known Polish choreographer Krzysztof Pastor, is to list what isn’t in it. The Nurse. The Potion Scene (Juliet’s most important moment). Paris in the tomb scene (and barely discernible elsewhere). Swords—although once in a while various guys mime dueling gestures. Convincing crowd scenes. Any sense of Verona as a city beset by an ugly family feud. Any sense of sexual excitement between R and J, although they’re cute kids who roll around on the ground when he’s not swirling her overhead in one of the thousands of lifts that constitute Pastor’s vocabulary and remind us of an ice skating competition. Any way to distinguish between Lord Capulet and Tybalt in the opening scenes (no one I know could figure out which was which). No Montagues at all, unless you count Benvolio, who, like Paris, was barely discernible. No reason why Friar Laurence is in a stylish gray suit. No sets—only distracting projections. This is a barebones production.

There was also no explanation of why, although the program announced three acts, there was only one intermission, thereby making early escape impossible for those of us who would have gladly slipped away after the first two acts. And—oh, yes—there wasn’t a single interesting step or combination. (You knew Romeo was either suffering or ecstatic when he flung his head back and arched his torso.) 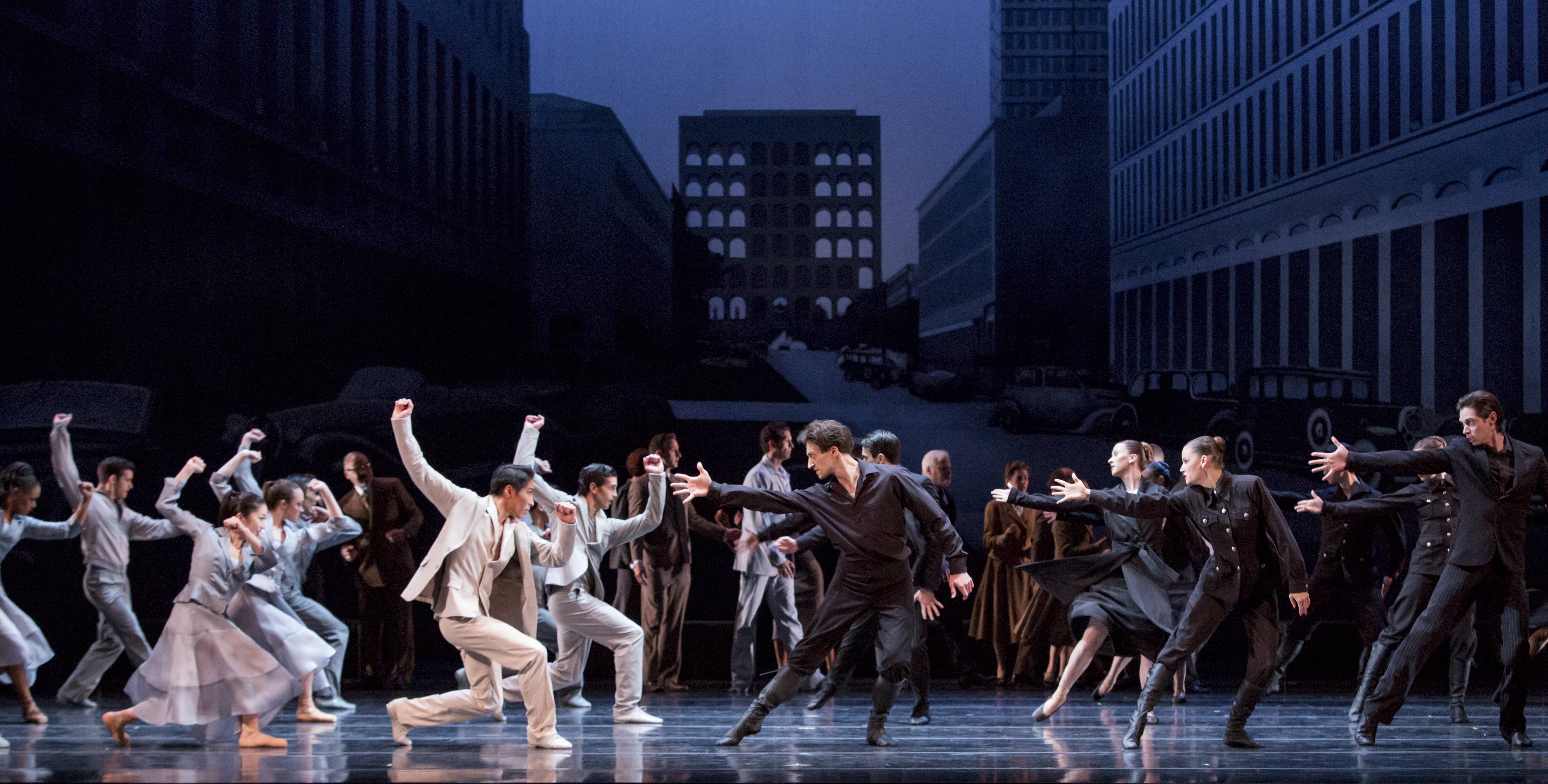 So what was in it? A concept! The three acts were set in the 1930s, the 1950s, and the 1990s, although no one grew older as we leapt decades—I guess a love like R & J’s is eternal and unchanging. There were black-shirted Fascists in the 30s, though, and fun-loving post-war youngsters bopping around in the 50s. Nothing was clear about the 90s.

All this was presumably the work of the dramaturg, Willem Bruls. How unfortunate for Shakespeare that Bruls wasn’t around when he was dreaming up his story and his characters, not that a story everyone knows has to be strictly adhered to (though coherence would help). There have been countless ballet versions of Romeo & Juliet, to say nothing of Romeo and Juliet, and a first-rate choreographer can find meaningful ways to retell the story. For instance, almost 75 years ago Antony Tudor created a ravishing ballet to the music of Delius, long before the Bolshoi came our way in 1959 with the spectacular Lavrovsky version, Ulanova, and our first real immersion in the superb Prokofiev score (here butchered). Ashton, Cranko, MacMillan, Béjart, Peter Martins, Mark Morris and a host of others have followed; there’s even been a version in which the doomed lovers escape from Verona only to end up as a bickering couple with serious domestic issues. (Now there’s a concept!)

So why would the Joffrey come to town with this pallid, reductive production lacking evern a pair of charismatic lovers? For the obvious reason: like Swan Lake, Romeo is box office. And if you’re a provincial company—which, alas, the Joffrey has proved itself to be—you swagger in with a sure-fire hit. New York, however, unlike Chicago, is a dance city. We’ve seen ’em all, and we definitely didn’t need to see this one. 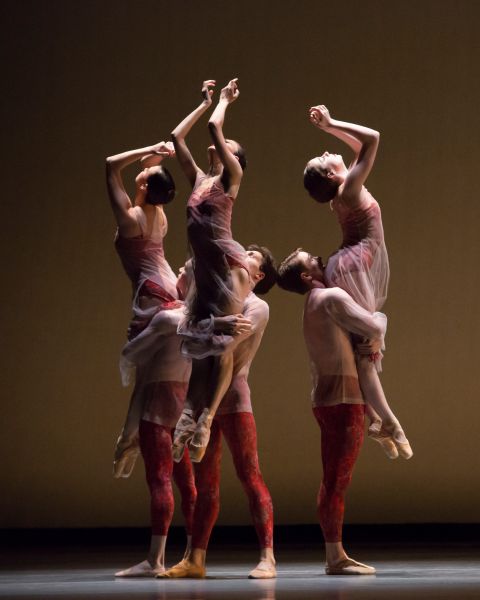 And then came the Gala. The audience wasn’t very gala-ish, but then neither was the program. First up was Yuri Possokhov’s Bells, to Rachmaninov’s lugubrious piano score. Possokhov, San Francisco’s resident choreographer, was a strong, handsome dancer originally from the Bolshoi, then on to San Francisco via the Royal Danes. I’ve seen four or five of his works through the years, all of them efficient and pointless—much like the work of his boss in the Bay City, Helgi Tomasson.

Bells has ten dancers, most of them capable and appealing, none of them standouts. It’s romantic, sort of; it’s moody; it keeps telling you how full of feeling it is. One passage, for instance, has three women in pretty, long dresses acting out some private unhappiness in a kind of synchronized oy-veyness. Then there’s the predictable swooning pas de deux. The whole thing is derivative: everyone should sue. And worst of all, it was endless. Why would anyone think this was an appropriate curtain-raiser for a gala?

Then, as a palate cleanser, we had Myles Thatcher’s Body of Your Dreams, a mercifully brief glimpse of bouncy young dancers in bright colors carrying on in a gym as words of encouragement blare from a loudspeaker. This was practically a throwback to early Arpino—trying to be trendy and appealing to the youth audience (if it exists). 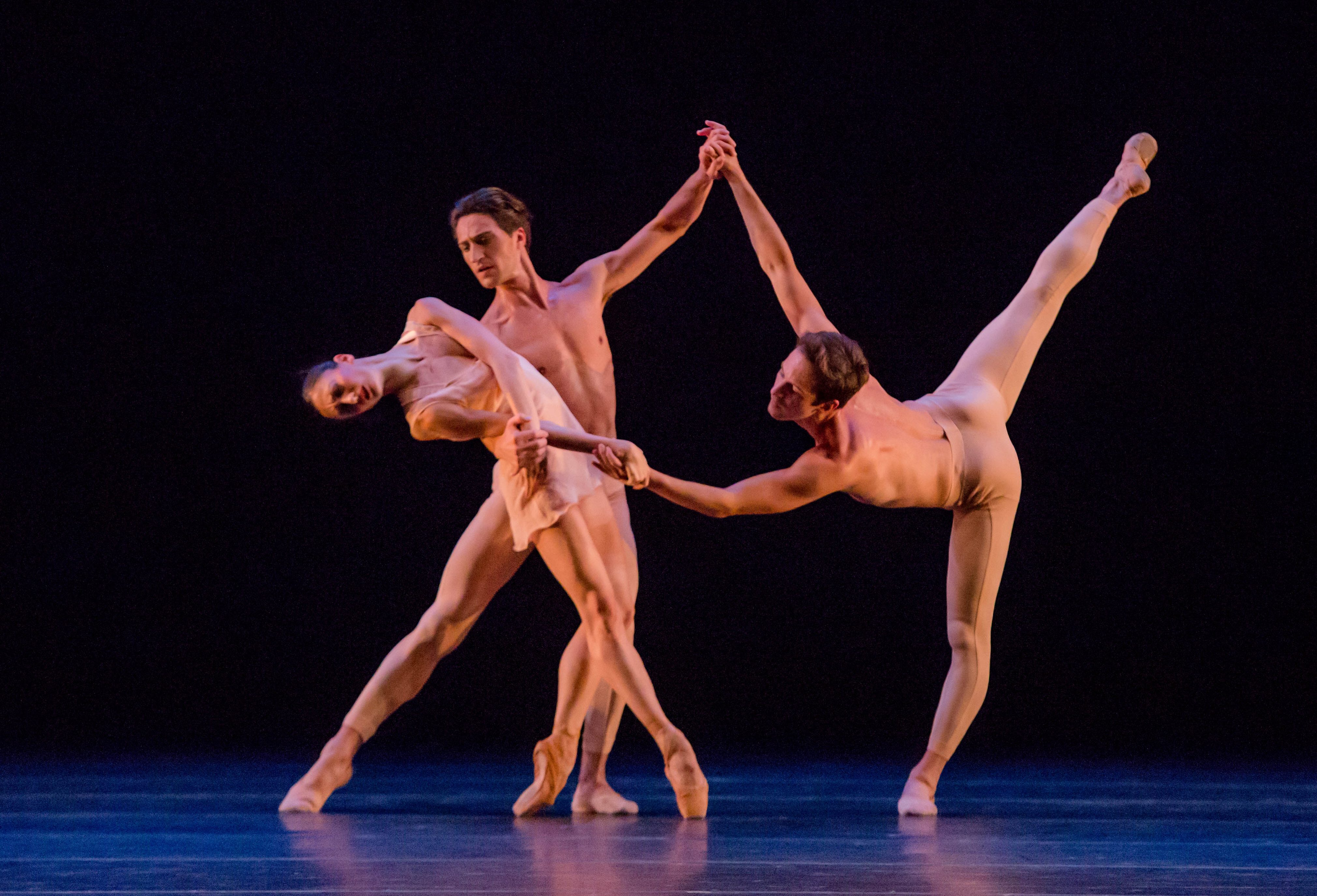 Finally, Christopher Wheeldon’s Fool’s Paradise, now ten years old. It’s beautifully lit, it has glitter or confetti spiraling down through the dark, it has handsome sculptural moments, and it’s not much fun. This is mid-level Wheeldon, and there was no reason to bring it back to New York.

The Joffrey’s artistic director is the British Ashley Wheater, another graduate of the San Francisco Ballet, where he was ballet master, then assistant artistic director. So it’s no surprise that the Joffrey repertory echoes San Francisco’s, with its somewhat old-fashioned Euro-slant and the overall unexciting uniformity of its dancers—only without San Francisco’s occasional starry presences. After twenty years, the Joffrey has brought us sub-San Francisco, with nothing to say of its own. Even so, as the program informs us, not only has the Boeing Corporation given Wheater its Game Changer Award, but he has received the Chicago Spirit of Innovation Award, as well as having been named a Lincoln Academy Laureate, “the highest award presented by the State of Illinois.” 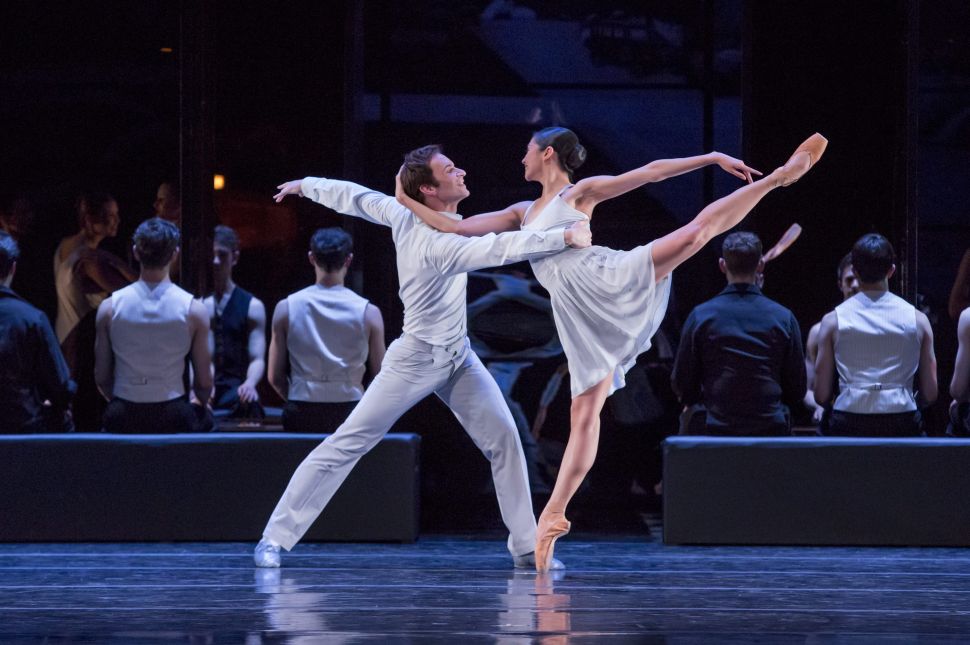