There seems to be a lot of people who checked in for the first couple episode of the first season of The Leftovers and then checked out, citing the show’s thematic concerns with misery, grief, and madness as being hard to lock into. And okay, that’s probably fair—season one was (great, but) kind of tough going. But what’s lost in so much conversation about the show, especially starting with season two, is its weird sense of humor. If ‘sense of humor’ is even the right phrase…I’m thinking about the notion, established in season one, that the entire regular cast of the 80’s sitcom Perfect Strangers vanished in the Sudden Departure, which endowed reruns of that show with grave meaning and significance for those left behind.

It’s not a joke, necessarily…it’s a quirk, a world-building detail fleshing out the seemingly random nature of who Departed and who did not, a little touch revealing both the playful side of the folks behind the show and how deeply they’ve considered the world in which their story is set, which then took on some extra pathos when it turned out, in season two, that Mark Linn-Baker (you know, Cousin Larry) did not depart, instead running away to Mexico to avoid the humiliation of being excluded.

Which is all to say that when this episode kicks off with the Perfect Strangers theme song, it’s not entirely a non sequitur. And actually, that song, with lyrics that allude to beating the odds and standing tall and finding light in the darkness in a weird way makes more sense attached to The Leftovers than it did leading into a show about a Midwestern man explaining social norms to his demented cousin.

This week focuses on Nora, and opens with her acting in her role as an investigator for the Department of Sudden Departures, looking into the death of the Miracle town square Tower Man, that dude on the tower…in the Miracle town square. We see him stagger and tumble to his death, but his wife (Brett Butler, last seen in the shantytown outside Miracle tormenting Nora’s brother, Matt) insists that he’s departed. Butler says he showed his devotion to God through suffering and received his reward, Nora’s not so sure, even after Butler trots out a procession of witnesses.

Nora confronts Matt, who seems to be maybe the leader of the folks gathered in Miracle waiting for the anniversary of the Sudden Departure. He’s got a sort of mysterious nosebleed that I bet we’ll find out more about soon enough, but Nora doesn’t worry about it—she presses him for information. Matt talks about how loyal Brett Butler was, standing guard at the bottom of the tower while her husband loomed above, ignoring her, before finally caving and admitting that the dude croaked from a bum ticker and that he helped quickly bury the body to help perpetuate the notion that a miracle took place. He roars at Nora about letting it be, giving the guy a little grace in death. Nora responds, “So are you going to dig him up, or should I?”

What a great, complicated character Nora Durst is, what a great performance Carrie Coon gives. I don’t think it’s even worth trying to capture how great Coon is in words, the only thing to do really would be to replace an O in the Hollywood sign with a big sculpture of her head. We’re reminded this week of Nora’s status as someone who experienced a fleeting fame following the Sudden Departure, due to the fact that her husband and two children all disappeared, leaving her all alone (kind of paralleling Mark Linn-Baker’s story, which we’ll get to). She serves as important role as a government certified skeptic in a world where it’s hard to tell what’s real and what’s faith or hope or madness run rampant, but her skepticism goes deeper than helping people discern reality—she can be scathing (when she mocks John for believing Kevin might have supernatural powers) she can be wrathful (when she disrupts the shrine built to the Tower Man by desecrating it with a large photograph of his corpse, his skull horribly caved in) she can be funny and charming (bantering with Kevin), she can be deeply, deeply sad (all the time, laced through all that other stuff). She tells Brett Butler that the Tower Man’s suffering was an elaborate coping mechanism, while she herself skirts from one to the next (smoking, raging, investigating, joking, getting a tattoo of her kid’s names and covering it up with an impulsive Wu-Tang Clan tattoo, breaking her own arm to hide the tattoo).

This episode is split evenly between Nora character-study stuff and plot stuff, although probably there are shades of gray that won’t become clear until later. Nora is lured to St. Louis by a mysterious call promising to reunite her with her kids and meets Mark Linn-Baker in a hotel room, where he tells her he’s involved with a shadowy organization that’s figured out how to replicate the weird radiation found at departure sites and has a device that can ‘send people through’ for a price.

MLB is great here, paranoid and nervous, anxious to convince Nora of the truth behind his claims, and wrenchingly vulnerable when talks about how being left behind by his co-stars taught him the arbitrary nature of the universe.

This all raises some questions. Like who’s behind this shadowy organization, and why did they choose Nora? Because she’s a formerly famous survivor who spends her days debunking departure claims? That would be good PR for the group, although they do seem very committed to secrecy. If they’re helping ‘send people through,’ why charge a percentage of a subjects net worth? Doesn’t that seem dubious? There also seems to be a distinction here between departing and dying that’s kind of interesting, as using radiation to get blasted into the unknown makes it seem like the people who are up for this don’t think where they’re going is the typical afterlife true believers might expect post-dying in any of the old fashioned, tried and true methods.

At one point Nora accuses MLB of wanting to die, and he tells her “I don’t want to kill myself, I want to take some fucking control.”  Maybe there’s an answer of sorts in that.

Also noteworthy—Carrie Coon is also starring in season three of Fargo, and both shows feature scenes where technology fails to work for her. In Fargo an automatic door sensor doesn’t register her presence, in this she runs up against an automatic check-in kiosk at an airport en route to meet MLB, as well as an automated gate in the airport parking lot when she’s trying to leave. I don’t know about Fargo, but here the deal seems to be either some thematic stuff (the kiosk won’t let Nora check ‘no’ on a question concerning whether she’s traveling with an infant) or some supernatural stuff, maybe both. Either way, Carrie Coon is the hot commodity go-to actress for playing women who are either frustrated by the automation of the modern world or too luminous for machinery to deal with, although there seems to be something vaguely sexist about calling a woman ‘luminous’ to me.

Anyway. Nora returns from St. Louis to find Kevin asphyxiating himself with a plastic bag. He tells her he doesn’t want to die, it just helps him feel, and she gets it. He says he thinks they should have a baby, and she cracks up laughing. She gets a phone call from the shadowy organization inviting her to bring 20 grand to Australia in exchange for a radiation blast, and she accepts. She tells Kevin she’s heading to Australia for work, he asks if he can tag along…

So let’s see where that goes. 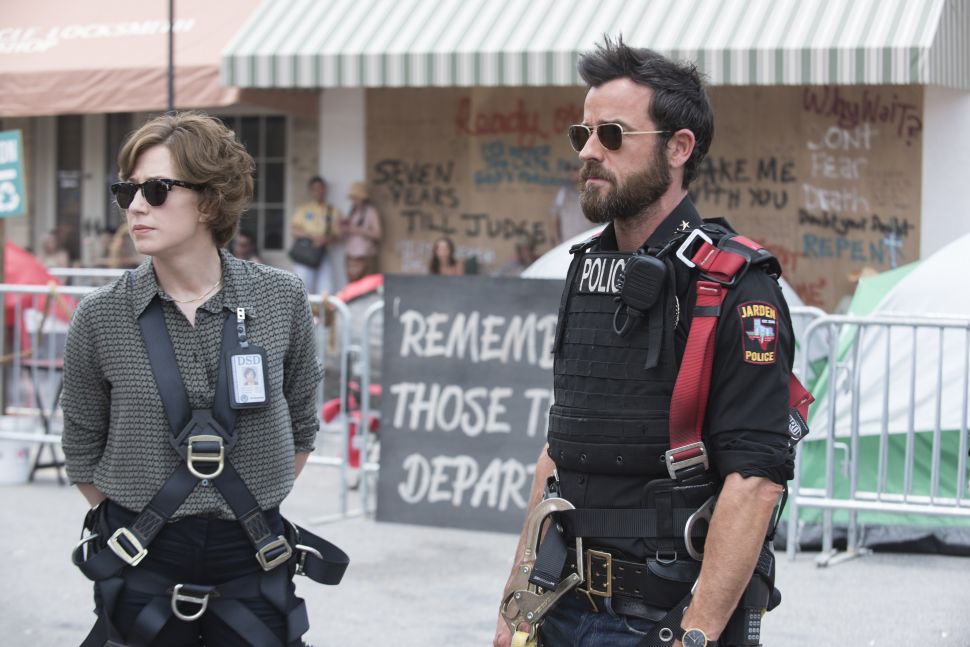