Like the season one finale, this episode begins with a voice-over explaining everything that happened and why it matters. Have you missed the entire season? No worries! Ember is here to explain everything, from last season’s arc with Martin Chatwin to this season’s theme (“sublimated trauma”).

I would be more forgiving of the five-minute voice-over recap if this episode felt more cohesive—there was nothing final about this finale. No surprises, no arcs coming together, no big reveals, no real stakes. Ember even promised in the voiceover that we’d get some resolution with that candy witch Quentin met in the first episode of the season (“Don’t worry, that will pay off”). What gives? Unless I’m missing something, she never came back. Was she secretly a fairy, or a Big God? Like most of the important questions raised in this episode, I guess we’ll wait for things to be answered in season 3.

Post-niffin recovery, Alice is at Brakebills South, being treated like she’s on suicide watch or in rehab; Quentin finds her contraband (matches) and forces her to drink a potion that won’t allow her to hurt herself. She is largely irrelevant for the entire episode, although we do get one pretty nice kiss with Quentin later on, and the season 3 set-up for her that a lamprey is after her and out for blood. But let’s move on to this episodes central players, shall we?

Penny is in the infirmary at Brakebills, dying of “cancer-plus,” after his stint in the poison room with two to three weeks to live. He’s summoned to the Library because even dying doesn’t get you out of work, to help deal with the “blank pages at the end of everyone’s book” issue. Kady is willing to do whatever she can to save him, even if that means secretly spying on him and passing Library information to outsides (so, basically her exact role from season one when she was stealing Brakebills information for Marina.)

Those blank pages probably have something to do with the end of all magic, which is coming out because the mercurial and easily bored god, Ember, is just about ready to destroy Fillory. The only thing that can help? Arbitrarily getting the gang back together.

Eliot comes to see Julia, recently reunited with her shade, to see if she’s willing to help. “But I betrayed you, remember?” she says, smoking on the couch (if anyone deserves the cliché post-trauma cigarette, it’s Julia). “That was a long time ago,” Eliot replies, and jesus, it does feel like it’s been ages. Remember when this show had the silly, singing Martin Chatwin? That guy died forever ago.

Meanwhile, Margo is in the fairy castle, continently located in a parallel plane right above Whitespire (the “AM radio version”), doing more to save Eliot’s wife and child than Eliot. The fairies, predictably, aren’t so keen to give back the baby, but they do give a plant to bake into little cakes to help summon Ember, and they’re happy to take Margo’s eye as payment for transportation back to her own dimension, leaving our bitch queen a gorgeous, badass Cyclops and officially the coolest character on the show.

With that, it’s time for the big Ember showdown, and everyone has a job that plays into their skill sets: Quentin is the nerdmaster general, getting along with Umber in his pocket world; Josh is baking; and Eliot and Margo are, what else, throwing a party. Oh, and Julia is here, breaking open the pocket world at the opportune moment and brave enough to face down a god with a sword.

(Did I miss the way they’re able to jump between worlds so easily now? The button still belongs to the dragon, right? And yet Eliot, Julia, and Quentin all pop between the real world and Fillory as easily as the writers need.)

When the scene ends, we have two dead gods and no more threats to Fillory’s existence. Halfway through the episode, the major conflict is ended, and nothing else really gets resolved. Instead, we get set-ups into what the big plot points for season three are going to be: Alice dealing with that lamprey, Penny trying not to die of magical cancer, Kady spying for Marlee Matlin, Eliot and Margo trying to invent democracy.

Oh, and the biggie: Ember and Umber are gods, but not the Gods-with-a-capital-G, who send out a magical plumber (really) to shut down magic because of Quentin’s meddling. Magic has been turned off like a leaky faucet, and Quentin and Alice are back at Brakebills studying the theory of magic with no application like they’re in Defense Against the Dark Arts taught by Umbridge. (Also: they’re still students at Brakebills? They haven’t graduated yet? WTF is with this timeline.)

And so the episode ends with two cliffhangers: fairies outside Whitespire, presumably about to take over Fillory, and Julia meeting Quentin at Brakebills (at this point, they could have just let her in, right? The Beast is dead. But oh well) so she can show him that she, unique among everyone, still has magic. Looks like her shade wasn’t the only gift from the Goddess?

Well, this has been fun, and almost always better than I expected. I’ll see you next season, folks! 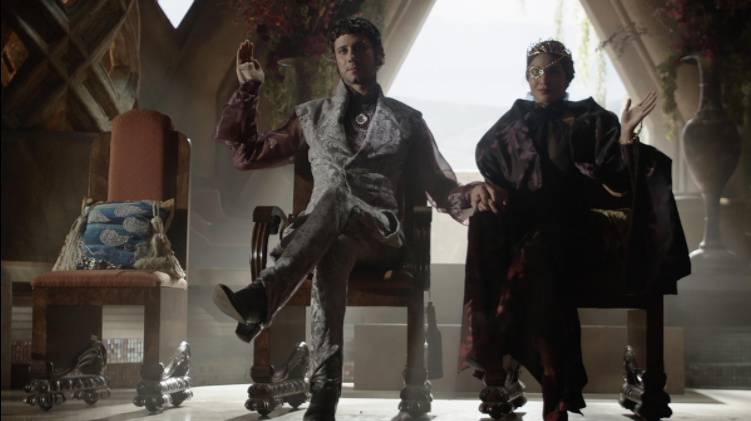