Set during the First World War and the decline of the Ottoman Empire, The Promise, an epic mixture of war, history and romance that catalogues the horrors of the Armenian genocide perpetrated by the savage Turks is not exactly what I’d call a sure-fire commercial hit with unlimited box-office appeal. It has a tiring length that needs to be trimmed. But more importantly, it also has the guidance of acclaimed Irish writer-director Terry George, who proved with Hotel Rwanda that he can tackle the wrenching subject of genocide with thrilling cinematic results. A wonderful cast adds no-fail polish.

In the year 1914, in a half-Turkish, half-Armenian village in Turkey, Oscar Isaac plays Michael Bogosian, a poor but gifted apothecary who makes medicine out of herbs and twigs, but dreams of studying modern medicine in Constantinople (now Istanbul, in case you don’t know). Michael is ambitious but so broke that he pays for the trip with the dowry from an arranged marriage to a girl he hardly knows and doesn’t love. In the city, he makes two new friends—Chris (Christian Bale), an American photo-journalist gung-ho to cover the atrocities of the oncoming war, and his girlfriend Ana (beautiful, graceful Charlotte Le Bon), a sophisticated fellow Armenian who has lived for years in Paris. This attractive trio enters a dangerous romantic liaison with torrid sexual tensions, distracted by the growing Turkish army that aims to violently wipe out the Armenians, and by Michael’s guilt over the girl back home who is financing his studies. The film follows Michael’s arduous journey back to his hometown and his reluctant marriage, Chris’ work for the Associated Press which includes coverage of one of the most gruesome massacres ever captured on film, and Ana’s humane dedication to saving lives as she busies herself protecting the orphans trapped in a Protestant mission in the war zone. As Mr. George sways between the star-crossed struggles of the three good-looking protagonists to find love, and the heinous aggression of the Turks, including efforts to collect the life insurance policies issued by Armenian insurance companies, there is often too much history to absorb, too many details to collate, and a lot of resulting confusion. (I never fully understood the role the Germans played in so much racial aggression and civil war, although their hatred of the Armenians is clearly a prelude to the tragedy of the Holocaust a few years later.) Still, Mr. George is such a meticulous filmmaker that he doesn’t burden the viewer with a dossier of facts too dense to follow. You always know who the good guys and the bad guys are.

Still, by crowding so much history into one film and still tell a compelling story, certain factual liberties had to be taken. Be forewarned: the leading characters, Michael and Ana, and their families are fictional. Oscar Isaacs and Charlotte LeBon are so magnetic and convincing they make you believe otherwise. The Chris Meyers character played by Christian Bale is a composite of real AP reporters of the time. Other characters, including the U.S. ambassador who stood up to the Turks, the French admiral who conducted the rescue by sea of 4,000 Armenian refugees, and the Armenian mayor who led the resistance, are all real. So are the most harrowing incidents, including the German battleships, the mass arrests, the forced labor of Armenian prisoners on Germany’s Berlin to Baghdad railroad, and the death marches across Northern Syria. Distilling so much factual information while still focusing on that central love triangle between the three stars, results in a film which, in my opinion, is sometimes exhausting. But Terry George remains a director I admire, and as movies go, the integrity and importance of The Promise are irrevocable. 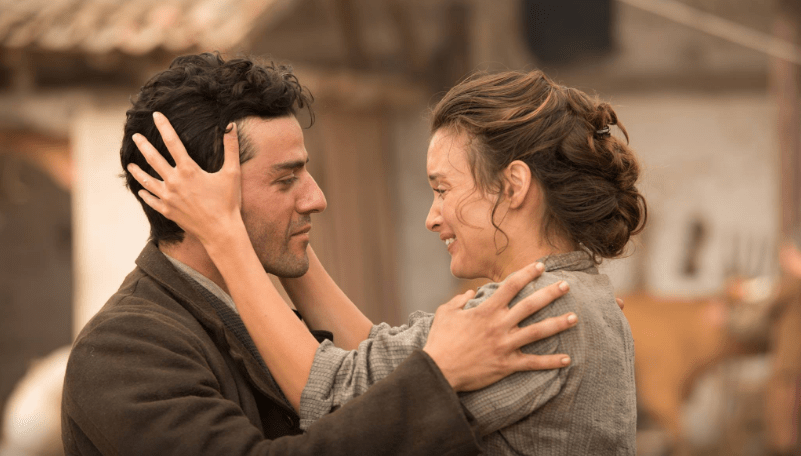