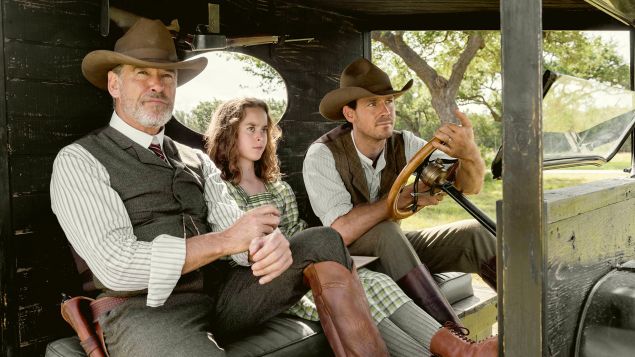 We open with a young Eli McCullough shooting a wild turkey the woods of Central Texas in 1849. “Is he The Son?” you’re wondering. We’ll have to wait and see. In the very next scene, back at home, his sister refers to him as his mother’s son, so he’s definitely a son if not the son. Before I have time to make another stupid joke, Eli’s family is attacked by a group of Comanches, his mother and others are murdered in front of him, and their home is burned down. We cut to the future where young Eli has grown up to become Pierce Brosnan.

Quick note on the opening title sequence — if you’ve seen True Detective and The Night Of, you’ve seen this one too. I’m not knocking it; I’m just genuinely curious why this is the opening of every single drama now.

Back at the McCullough ranch, everyone’s getting ready for patriarch Eli’s birthday party. Eli’s getting into the oil business. “The era of the cattle baron is over,” he opines. Meanwhile Eli’s son Pete is poking around trying to piece together who killed a cattle thief on the McCullough’s property. Looks like Eli got some guys to do it. Pete’s not a happy camper — killing people for taking your cows is the “old” way of doing things. Another old way of doing things is cattle ranching, which Pete is in favor of continuing to do, and Eli is not. Oil is the future and there’s a ton of oil on the McCullough land. Maybe. Probably? Nobody (including Eli) is 100% sure but it’s a nice thought. It’s up to Eli to convince a bunch of investors at his birthday party that he’s right though.

We flash back to young, beaten Eli being led away by the Comanches who attacked his family. His brother is also with them and he has some harsh words for Eli’s brash actions getting their sister Lizzie killed during the attack. Eli’s brother, certain that he’s going to get killed anyway, decides to take the initiative and get himself killed in front of Eli. So Eli has seen some shit.

Back in the future, Pete’s childhood friend Maria has some harsh words for Pete about the slain cattle thief. Then Pierce Brosnan gets his big monologue a la Daniel Day-Lewis’ “When I tell you I am an oil man, you will agree” in There Will Be Blood.

He toasts his party with “Here’s to the good guys finally winning” which feels ominous as all hell. But for now everything’s going swimmingly. Until everyone outside witnesses Eli’s oil rig explode. And this was no accident — it was sabotaged with dynamite! Eli and Pete and their men track down one of the people responsible. The culprit is none other than Cesar (Pedro Garcia’s son-in-law), who we’d met earlier at the McCullough ranch. He has a beef with Eli’s clan that’s about to get escalated to high heaven. Eli’s men tie him up and, presumably, take him back to the McCullough ranch where, presumably, things are going to get very ugly in episode two. Until then!

After a brief flashback to young Eli in 1849, we cut back to Eli in 1915, surveying the damage of his very exploded and destroyed oil rig. Back in 1849, young Eli is beaten badly and nearly burned alive by the Comanches holding him in captivity.

Back in 1915 at the McCullough homestead, Cesar’s family has noticed he’s not around anymore. That’s because he’s being held in captive himself by Eli’s men in a barn, on account of blowing up Eli’s beloved oil rig. The show wants you to notice the parallels between these two people being tied up in two different eras, in case you missed that. Eli, having acquired no empathy despite himself once being beaten as a kid, beats the shit out of Cesar. Before he can get too far though, the sheriff comes around to ask about where Cesar might be. Eli and Pete play stupid. Back in 1849, young Eli is forced to endure a group of Comanche women totally owning him for being a stupid, weak kid.

Meanwhile, Cesar’s father-in-law doesn’t seem terribly upset that Cesar is missing, but he should, because Cesar is still getting tortured in the barn. Pete tries to play good cop to Eli’s bad cop and does a bad job of it, while Pedro tries to negotiate Cesar’s release and peace between the two families. He fails. Cesar’s wife worries about her husband while Cesar threatens Pete. Pete tells Eli that they’re making progress with Cesar, but this isn’t good enough for Eli, so he cuts Cesar’s ear off. Eli manages to get some information from Cesar about who blew up his oil rig and manages to avoid cutting off Cesar’s other ear, thank goodness. Pete tries to talk Eli out of killing Cesar and doesn’t seem to be doing a great job of it.

Back in 1849, young Eli decides to get feisty and start fighting back against the women who are beating him. Oddly, all the other Comanches seem pretty ok with this. In the middle of the night, one of the women even sneak into Eli’s tent and has sex with him. Ok!

Back home, Pete reads Huck Finn to his daughter while he very clearly contemplates freeing Cesar the entire time. Do it, Pete! He does. Pete’s daughter watches this happen, which probably isn’t the best thing in the world. In return for his help, Cesar (who doesn’t think Pete is being entirely altruistic here) tries to kill Pete. So in turn, Pete kills Cesar instead. Man alive. Pete buries Cesar in the middle of nowhere, and that’s a wrap.

We’re in Austin, Texas where Eli is prepping to meet with an investor who can help expand his oil empire (which doesn’t exist yet.) The investor balks at the offer, on account of Eli’s oil empire doesn’t exist yet. Eli has a fantasy that he scalps the investor right in the middle of the restaurant and screams his lungs out while doing it. It’s totally insane and the series’ best moment so far, by far. More totally insane Eli fantasies please!

Back at the McCullough ranch, Pete’s daughter is having some serious guilt about seeing her dad smuggle Cesar (who he then killed, but she doesn’t know that) to freedom (except not really, because again, Cesar is dead now.)

Cesar’s sister-in-law grills Pete about Cesar’s disappearance and Pete does the absolute worst job lying about it that I’ve ever seen. Pedro grills one of Cesar’s friends about his disappearance and, more specifically, their guerilla tactics against the McCulloughs.

Back in 1849, young Eli has entered his 65th day in captivity. The Comanches have a new nickname for him which is literally “Pathetic White Boy.” This is awesome. The woman who Eli had sex with throws a tool at him, which Eli is confused about. Later in his tipi, the woman warns him not to flirt with her in public, oh and also, she has a suitor who will return soon and will cut off her nose if she cheats on him. They have sex. Eli in 1915 also has sex. So Eli’s good all around.

Pete’s wife notices he’s been a little distant lately. We, the viewers, know this is because he recently stabbed a man to death. Pete starts hitting the bottle — he’s not handling this well. Pete and his friend start having a conversation about the people they’ve killed in their lives, and Sully notices that something is very up with Pete. All of this is fine, and I’m sure it’s not easy killing another person, but recall that Cesar very much tried to kill Pete. After Pete tried to set him free, because Eli was definitely going to kill Cesar. But people are complicated.

Back in 1849, Eli is doing some post-coital cuddling and the woman calls him a “dickhead.” Alright. Then the Comanches decide to use Eli for some light bow-and-arrow target practice. Haha man up, Eli. Eli decides he’s had enough of one guy’s shit and picks a fight with him, which he loses badly.

Adult Eli has a fantasy that he’s back with his Comanche captors. Pete goes back to dig up Cesar’s body, and his wife Sally catches him in the act. Pete is completely falling apart from guilt. Sully’s with her and offers to move the body himself. 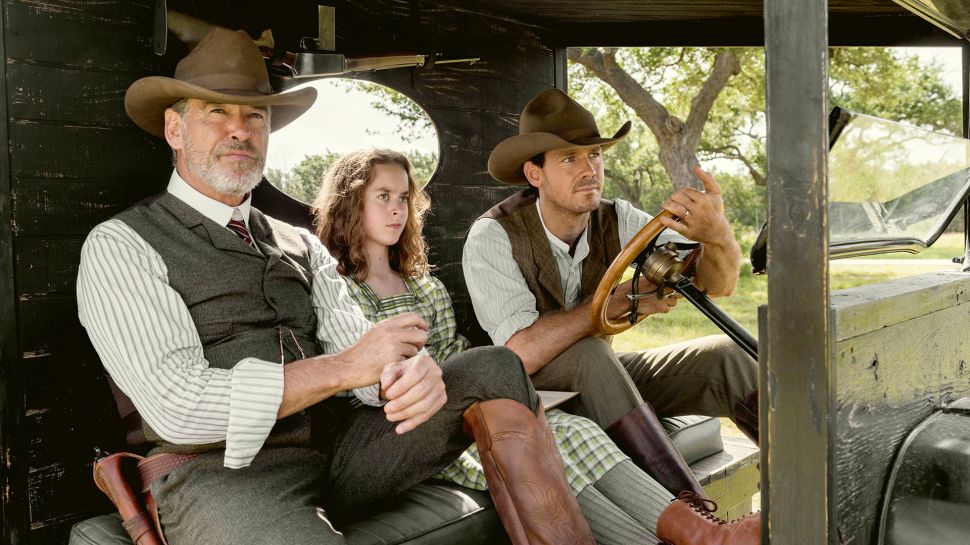