There’s a way of looking at this latest season of The Walking Dead—a charitable view of its drawn-out emotional torture porn—as a finely calibrated test of a viewer’s breaking point. Did you tune in for the season premiere to find out whose head(s) Negan bashed in, and then throw in the towel? (You’re not alone.) Or maybe your limit was watching Negan burn someone’s face off. Or seeing him toy with Carl like a cat with a piece of string? Or having an innocent kid die just so that Morgan could transform back into a killing machine?

And maybe it means something, the point at which you realize you just don’t want to do this anymore?

If so, then let the record show that my personal threshold came about 2/3 of the way through the season 7 finale, “The First Day of the Rest of Your Life,” when Rick, all of his war plans rendered for naught, is back down on his knees, facing the grim prospect of watching Carl die in front of him. And he just grits and tells Negan to go to hell. That he can keep torturing him and killing his people, but Rick won’t stop resisting.

I gather that this was supposed to be a brave and passionate moment, but the overwhelming sensation was: We’ve been here before. This is horrible and horrifying, and I don’t really have the stomach to do it all again. Even though I knew—the show having tipped its hand, in a possible attempt to leaven this very tension—that Ezekiel and his people would be arriving soon, and probably Maggie and the Hilltop warriors too, I could feel my mind saying, Nope, that’s enough.

And so when the cavalry arrived, tiger-first, it came as more of a release than a triumph. It was great to see them fight back and regain some semblance of the upper hand, and fun to see all our heroes in one place for a change, fighting side by side. But the show had already sucked all the joy out of the room—by cementing Eugene’s treachery, by drawing out Sasha’s inevitable suicide, by ploughing Rick’s plans under, and by stranding him there back on his knees, eyes wide, red-rimmed and desperate, listening to his girlfriend’s (apparent) death screams and waiting for his son to die. What is triumph really worth after that?

So how’d we get here? Well, Rick’s big plan, formulated with turncoat Dwight, was pretty simple: Slow the Saviors’ attacking party down with felled trees, long enough to rig up a bomb, blow it up when they get there, and then team up with the Junkyard folks to kill off whoever’s left. Then stage a sneak attack on the Sanctuary, who won’t be expecting it since Dwight will radio back to base that everything is OK.

But Negan has his own plans: Get Eugene to try to negotiate a truce, with Sasha as his ace in the hole. They get her back, in exchange for all of their guns plus one dead Alexandrian of Rick’s choosing. And as his other ace in the hole, the Junkyard is actually on his side, so the bomb never goes off and they turn the tables on them PDQ.

See, I told you they were garbage people. Don’t trust folks who devolve into some weird cult, with its own inane patois, only a few years into the apocalypse, I said. But did Rick listen to me? Nope. All caught up in his need for an army, he rushed headlong into a deal with these people who outright announced that they always looked out for No. 1. They were basically holding up a huge sign that said “Will Betray for Cash” the whole time.

Sasha, meantime, rides to the battle inside a coffin. Because Negan is nothing if not a showman, and this is his big number. But his performance nearly costs him the day.

Putting on a good face for the psycho, Sasha has negotiated Negan down from three dead Alexandrians to one, and agreed to act out his weird game. Then she downs the pill Eugene gave her, effectively removing herself from the board.

The episode is intercut with scenes of her riding in the casket, listening to music, slowly dying, having visions of her last conversation with Abraham before their fateful voyage toward Lucille. The purpose of which seems to be to give us a fitting goodbye to her character, as well as a sort of bookend to the season for Sergeant Mustache, opening with his death and closing with his valediction. (Glenn gets a similar farewell at the episode’s end.)

But in the real world, Sasha is turning, so that when Negan goes for his big reveal, the joke’s on him: She’s now a walker, at the ready to attack him. The Alexandrians (led by Carl!) use the distraction to fight back. But then a bunch of them get real dead real fast, Michonne locks in heated battle with a Junkyarder, and that’s how Rick ends up on his knees about to watch Carl’s head get bashed in.

Which is when a tiger suddenly leaps into the frame and kills a Savior. And as cool as that is, and as well trained as Shiva has proven herself to be, how on earth does Ezekiel tell her whom to attack? Maybe she knows not to bite the Kingdom folk, but the field of battle is full of Alexandrians, Saviors, Junkyarders—and oh yeah, now the Hilltoppers have also arrived—so how does she know whom to go after?

After a fairly perfunctory debate about whether coming to fight will compromise the Hilltop, Maggie has also ridden into battle, shocking Negan that the widow is alive and well. And together the three allies shoot their way out. The Junkyarders beat a tactical retreat, the Alexandrians try to and fail to salvage some of their plan by preventing Negan’s people from leaving, and that’s all she wrote. They bury their dead. Rick thanks Maggie for making the right choice, and Maggie declares that it was really just an extension of that same choice Glenn made so long ago, at the end of the very first episode, to save a stranger named Rick. Rendering a fitting, if sort of artificial, coda to the story of Glenn Rhee. And meanwhile, Negan mobilizes his huge army for war.

Which we’ll have to wait half a year to see. If you’re still with us, that is. See you in the fall, you crazy masochists. 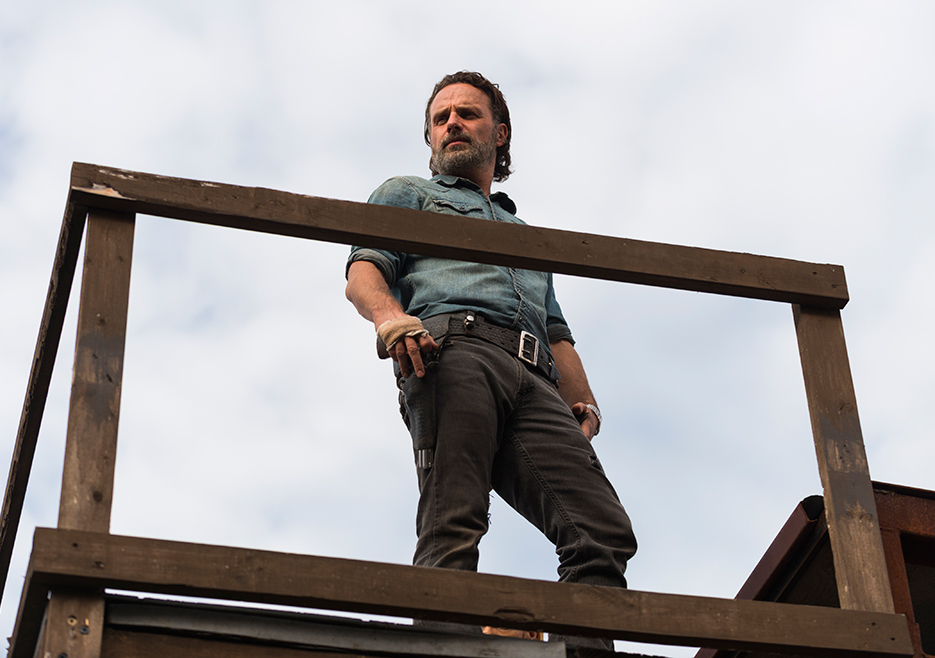