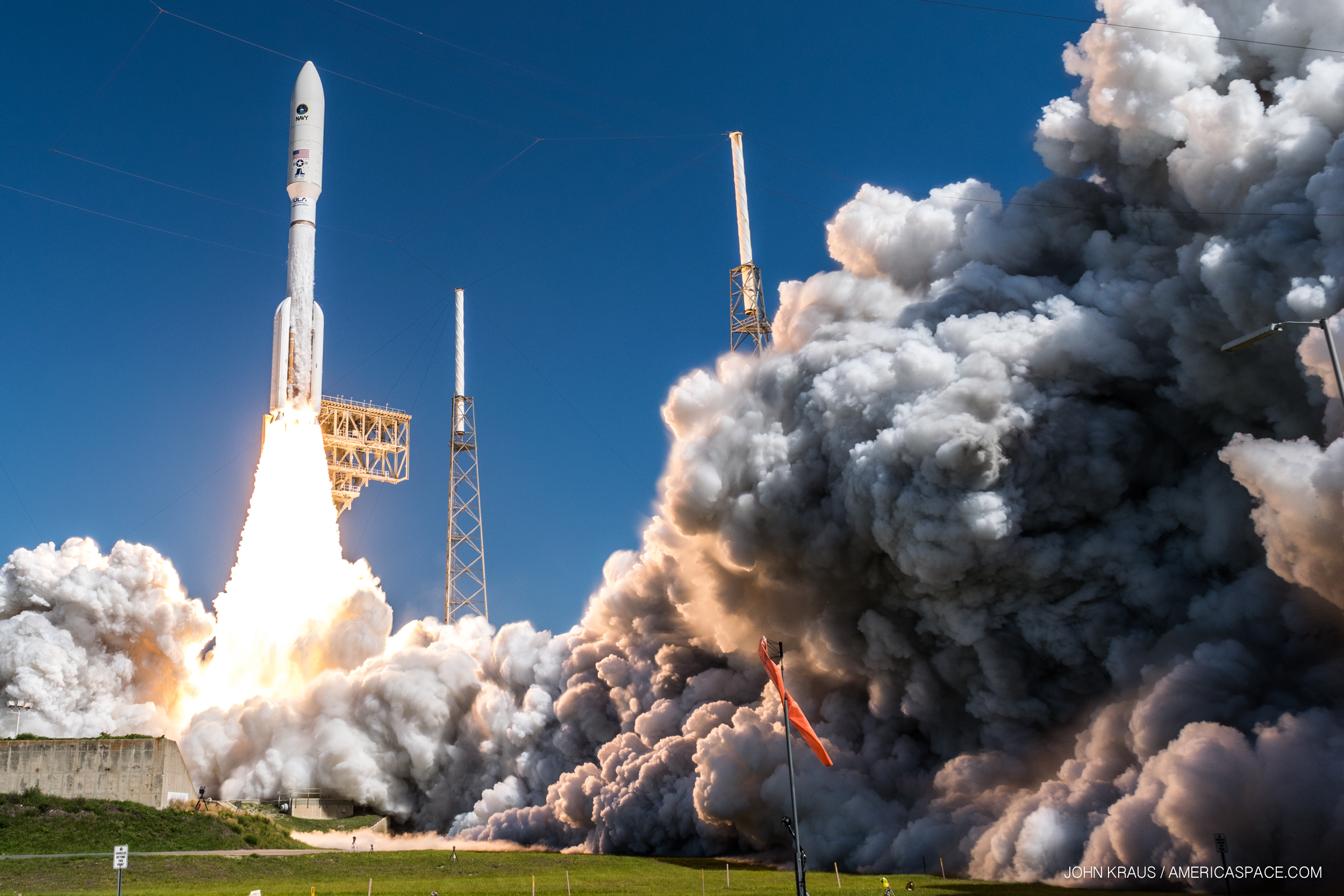 If you thought you had a cool job in high school, you didn’t. Meet John Kraus, a 17-year-old junior on Florida’s historic space coast whose incredible photography has been published in National Geographic and Wired magazine. When Kraus isn’t attending class, he’s busy working rocket launches at Cape Canaveral as credentialed news media.

Yes, your jealousy is entirely warranted. Since Kraus was 16 he’s been rubbing shoulders with professional photographers and space journalists while SpaceX and United Launch Alliance send rockets to space. Kraus shared some of his incredible launch photos with Observer and told us how he ended up with the coolest job a teenager could ask for.

My interest in space came first, as I was born near Cape Canaveral and have always been able to see launches from my house. When I was in elementary school, our classes would always go outside to watch the Space Shuttle launches. I always had an interest in the space program, but once I started photography in January of 2015, I photographed every launch I could, and my interest in spaceflight grew due to my interest in rocket launch photography.

How did you end up shooting launches at the spaceport as media?

I decided I was going to start taking photos shortly after the beginning of 2015. I randomly purchased a Nikon D3300 DSLR in early January and just started shooting for fun. About a month later, I shot my first launch: SpaceX’s Falcon 9 launch of DSCOVR on February 11th, 2015. After shooting launches from public locations for around ten months, I caught the attention of Mike Killian, the editor of AmericaSpace.com

We had exchanged a few messages online before, and after seeing my photographs of launches from public viewing areas, he took me on as a photographer for AmericaSpace. Under them, I’m granted closeup access to the rockets and launches at Cape Canaveral Air Force Station along with other credentialed members of the media. 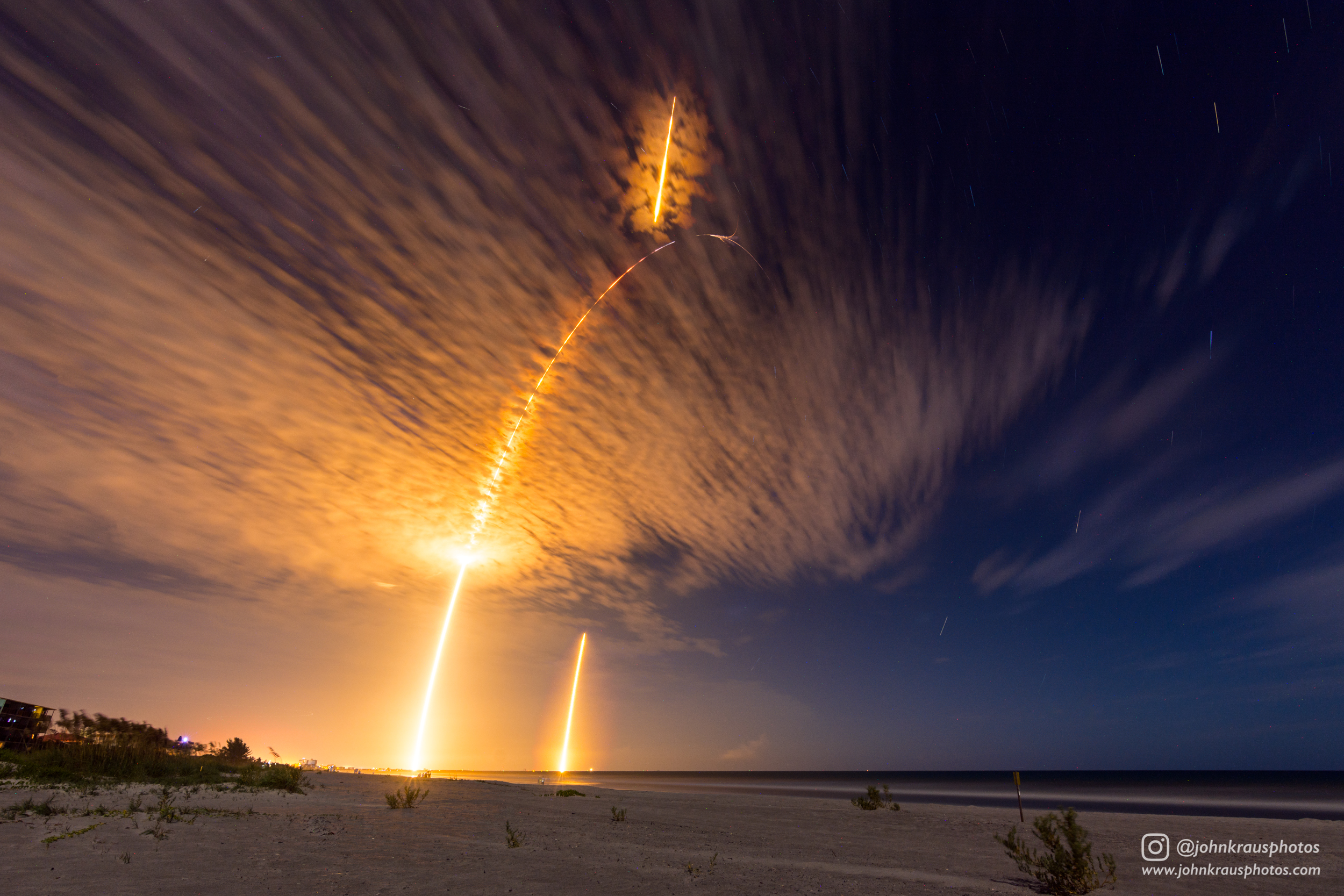 SpaceX launches the CRS-9 mission to the International Space Station and lands the first stage of their Falcon 9 rocket back at Cape Canaveral in this three image long exposure composite photo taken on July 18, 2016. John Kraus

What’s your favorite mission that you’ve covered and one from history that you have not covered?

That’s a tough one. I’d have to go with the Delta IV Heavy launch of the NROL-37 satellite this past summer. We were able to watch it from 1.6 miles away, and it was LOUD. In terms of launches I wasn’t alive to cover, it would have to be the Apollo 11 launch in 1969. The sheer power of the Saturn V combined with the historic significance of the first manned lunar landing was something quite special.

What do you think is the best  photo you’ve taken during a mission?

That’s an even tougher one. I’d have to give the edge to my closeup image of the RS-68A engine and GEM-60 solid rocket motors that power the Delta IV Medium rocket. The Delta IV sent the WGS-9 satellite to orbit for the United States Air Force on March 18th and I successfully took an extreme closeup of the rocket with a remote camera. By no means is it a “never before seen” shot as many photographers have done closeup shots of rocket engines before, and I was able to use their shots and camera settings as reference for my own.

But as I didn’t personally have an acceptable closeup engine image, I wanted to attempt one and try to put a unique spin on it. I opted to underexpose the shot even further than others had done so I could properly expose the rocket’s exhaust. I was then able to raise the “shadows” when post-processing the image so I could adequately represent the scene: 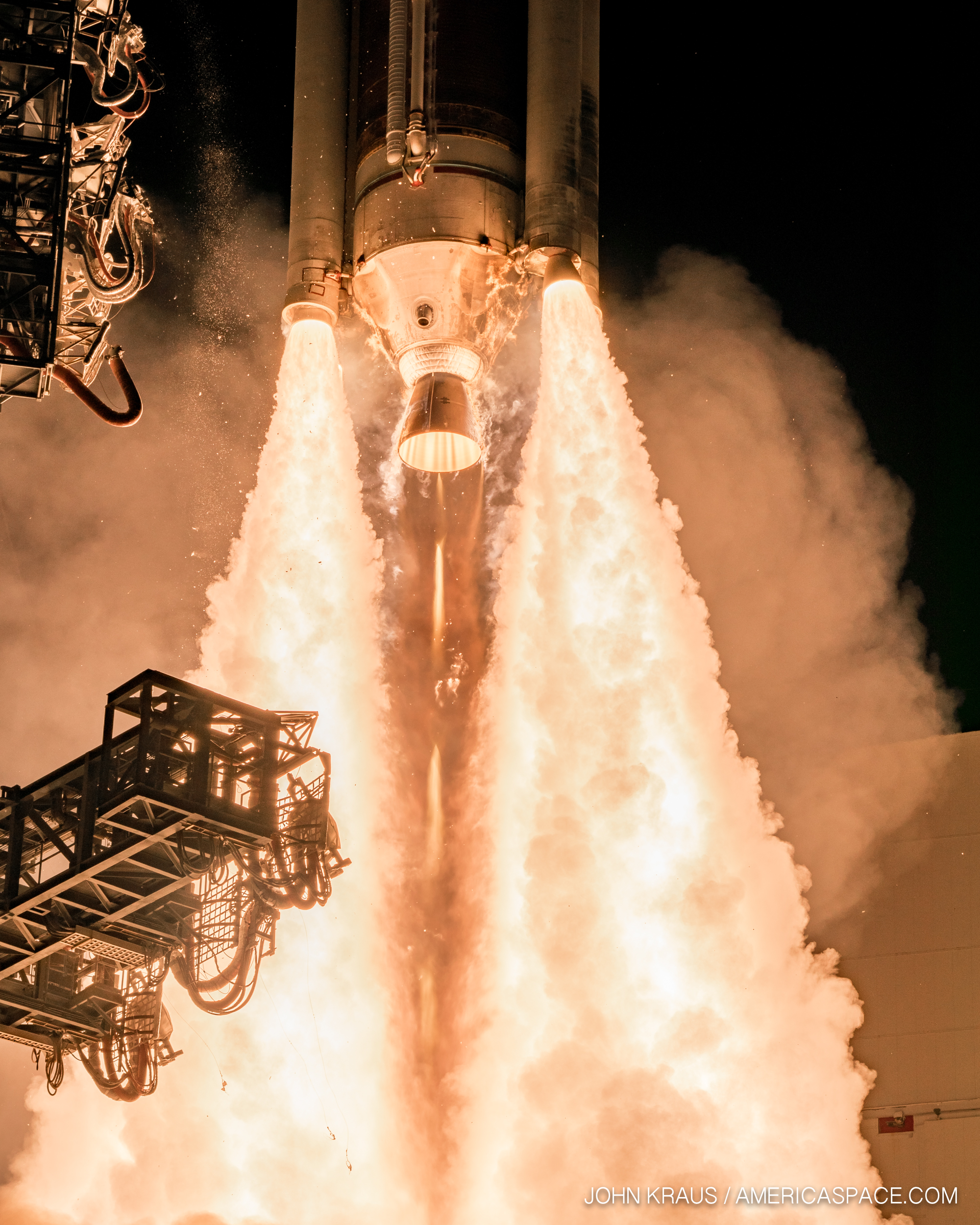 You’ve taken incredible closeup shots of rocket engines during launch, can you tell us how you do it?

Setting up remote cameras is tricky, but I’m lucky enough to have learned from some of the best spaceflight photographers in the world. People often ask me when I share my shots online: “How close were you!? How did you manage to take that?” People cannot be as close as our cameras are during the launch. If someone is close enough, the sound of the rocket would shake their internal organs violently enough to kill them.

All of my closeup images are taken with entry-level DSLRs and relatively cheap lenses. That minimizes any necessary replacement cost in case my equipment is damaged. Cheap gear is certainly capable. Most of the media pool uses cheap or older gear, and we all come out with amazing images. I have a small device that plugs into the camera and it triggers the camera when a loud enough sound is heard. I use a sturdy tripod that is staked down with tent stakes and secured with zip ties, so wind or the force of the rocket doesn’t knock over the camera. The lens’s zoom and focus rings are taped in place. I then wrap the camera in a plastic grocery bag and cut a hole in it for the lens to poke through. This protects most of the setup from rain and the launch itself. 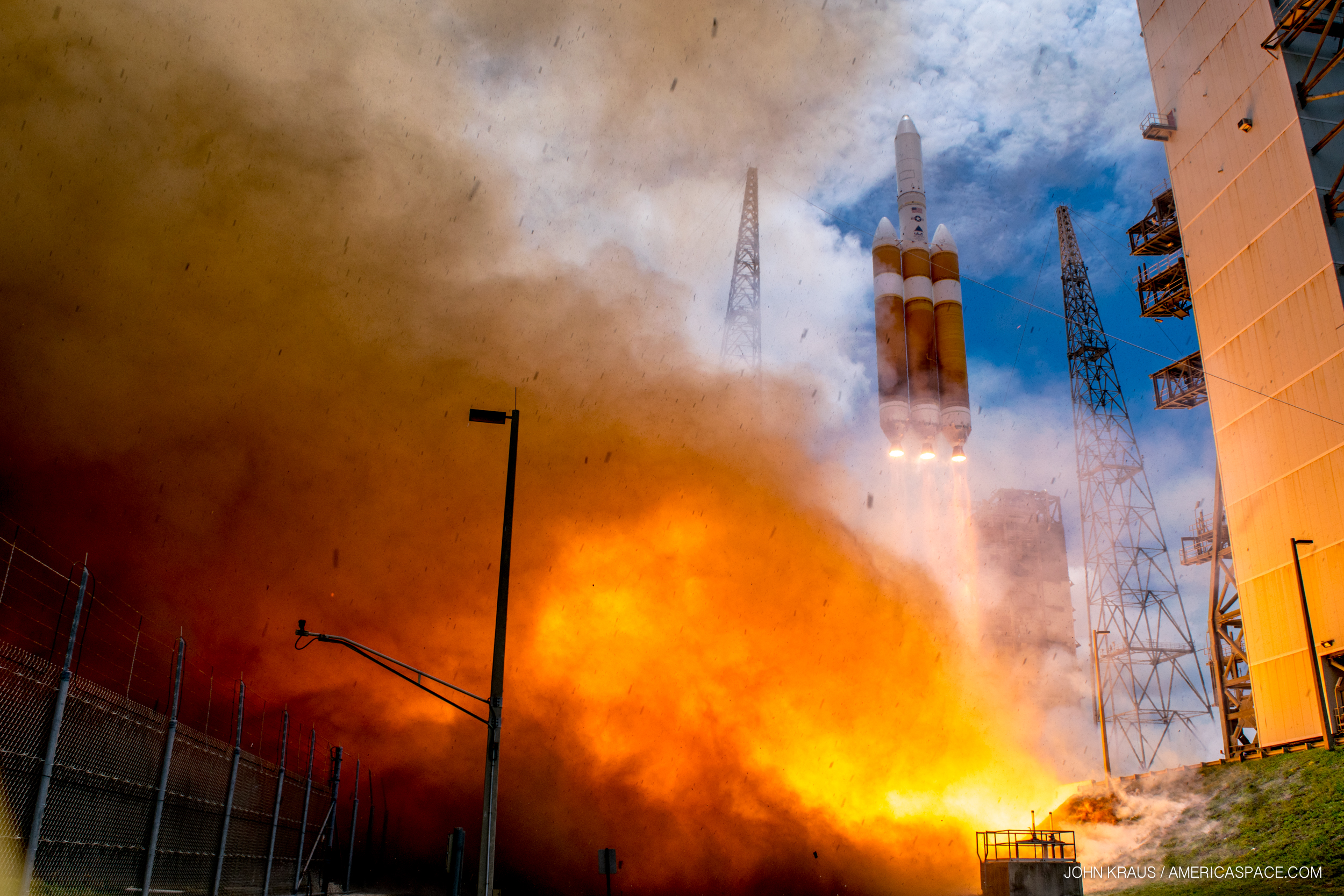 What do you plan to study in college and do you think you’ll continue with this career in the future?

Right now, I’m planning on studying aerospace engineering in college. Photography will hopefully always be a hobby in which I’m able to make money on the side. I enjoy taking taking photos too much to make it my sole source of income. I don’t want to be forced to create images for a living and become uninspired with my personal work. I’m a bit swamped with school and photography at the moment, so I don’t work a typical job. The majority of my income comes from print sales, which helps me afford new gear.

I see you use Reddit quite a bit. What’s your experience using the site and has it helped you get your work out there to the world?

Reddit is a great way to discuss broad and even very niche topics with others online. I’m particularly active in the space and SpaceX subreddits, some photography subreddits, and the NBA subreddit—I’m a huge NBA fan. I can tell that the users on /r/space and /r/SpaceX enjoy the photos of launches that I’m able to take, and Reddit is a great platform to share my work, but I first try to be involved as a member of those respective communities instead of using the site solely as an advertising platform. 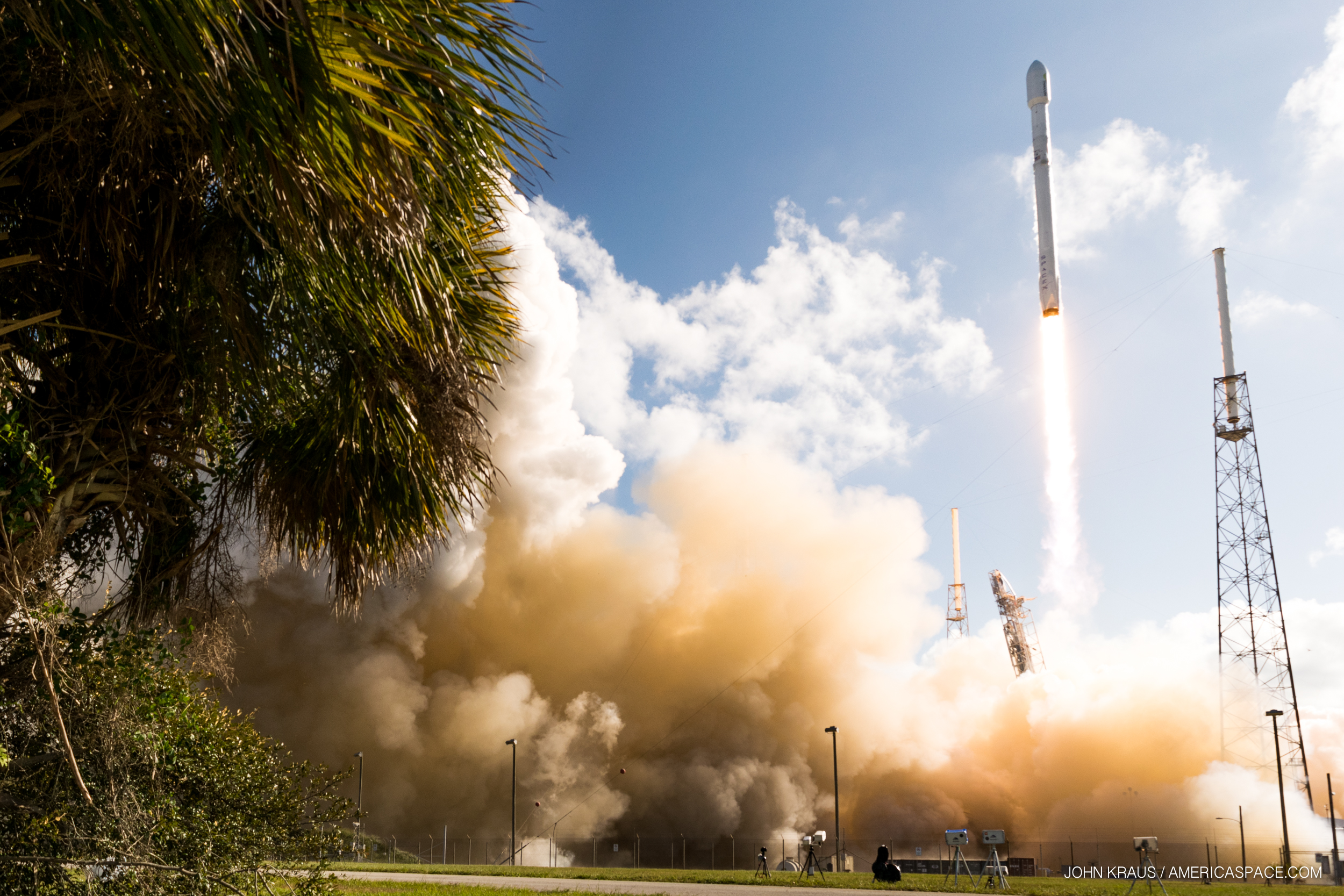 SpaceX launches the Thaicom 8 communications satellite atop a Falcon 9 rocket on May 27th, 2016. John Kraus/AmericaSpace.com

Since you’ve covered SpaceX missions, what do you think of their plan to colonize Mars?

I’ve covered a handful of SpaceX missions, both from public vantage points and on-site at Cape Canaveral Air Force Station under AmericaSpace. It’s certainly inspiring to see SpaceX reach towards Mars. I definitely have noticed the general public’s interest in spaceflight grow thanks to SpaceX. It’s always wonderful to see multiple companies or organizations unite for a common goal, and I look forward to seeing NASA, SpaceX, and other organizations collaborate to put a human on Mars.

What was it like witnessing SpaceX’s historic relaunch of a flight proven rocket?

Watching the SES-10 launch was an outstanding experience. I was on an elevated balcony on the Saturn V Center at Kennedy Space Center’s Visitor Complex, which is about four miles from launchpad 39A. I photographed the launch with two different cameras on the balcony, and then ran inside after about two minutes to process the photos and get them up online. I also had the SpaceX webcast on my computer and I was able to watch the landing. It was an awesome sight. I’m looking forward to seeing SpaceX continue to work towards their ultimate goal: Making humans multi-planetary. 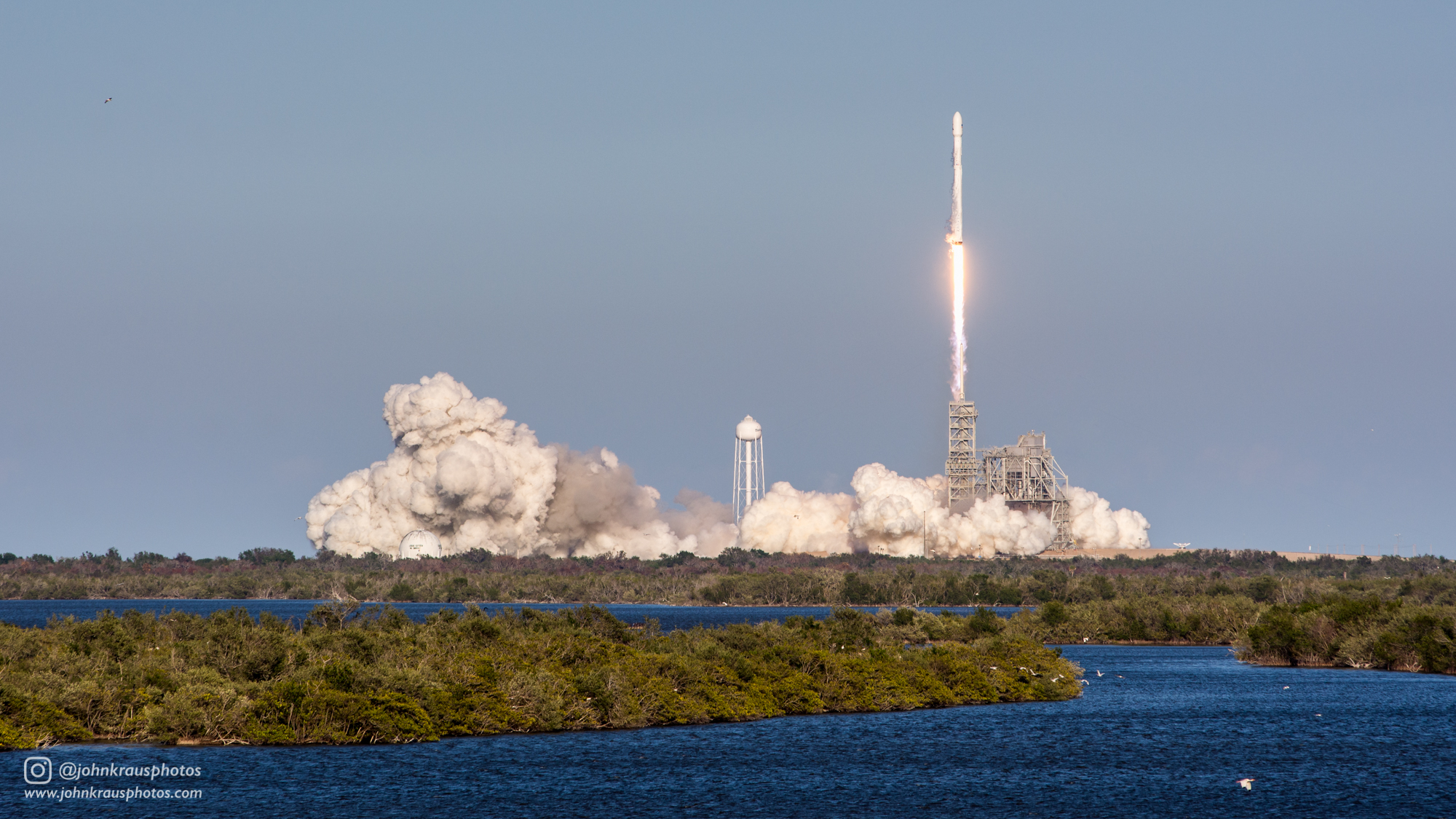 SpaceX soars into history as they re-fly a recovered Falcon 9 booster for the first time, launching the SES-10 satellite to orbit. John Kraus 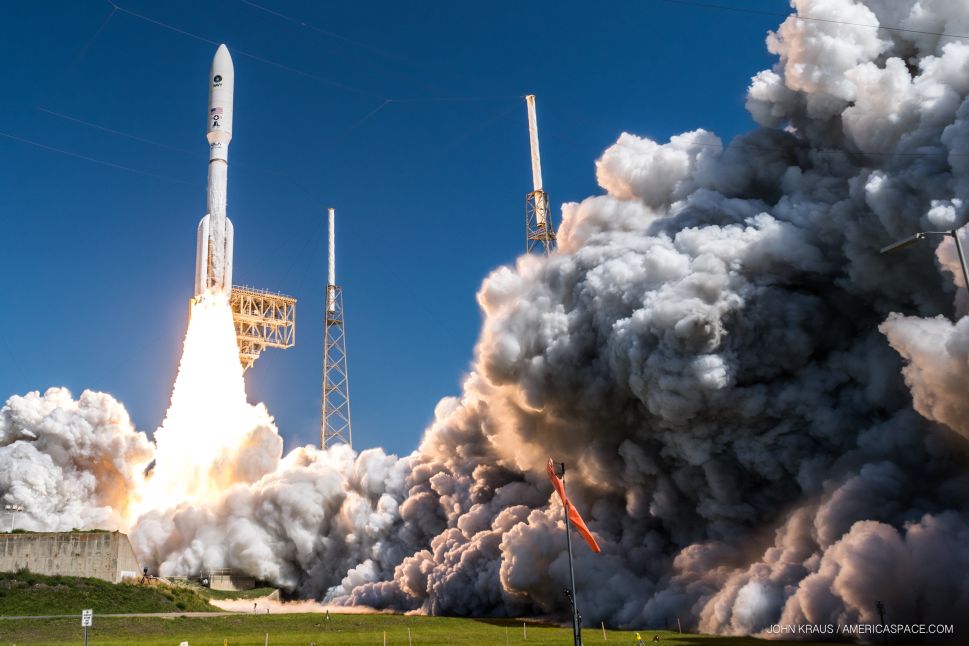