Hollywood used to look down on the sci-fi genre with the reluctant acceptance of an older sibling being forced to let their kid brother tag along. Then Star Wars: A New Hope, Close Encounters of the Third Kind and Superman: The Movie dropped in the late 1970’s and proved the genre to be a legit moneymaker capable of real quality. From then on, Hollywood took sci-fi seriously (and in the case of Zack Snyder, perhaps too seriously).

Today, video game adaptations have replaced sci-fi as the genre most likely to be laughed out of a pitch meeting; even Trump’s cabinet has a better track record. Like sci-fi before it, movies based on video games have struggled to hit the mark both commercially and critically. Wait, I’m being too nice, (clears throat) VIDEO GAME MOVIES ARE THE NEW “STARRING NICHOLAS CAGE” OF CINEMA. We’ve yet to see a universally praised and/or sure-fire box office hit make its way from the console and into theaters (with all due respect to the Resident Evil franchise).

But it’s only a matter of time until a video game adaptation nails the target like a sniper in Halo. My money is on Alicia Vikander’s Tomb Raider reboot coming next year.

Before we go any further, I’d like to preemptively shoot down any talk of 1995’s Mortal Kombat already fulfilling this goal. Scoring $122 million off an $18 million budget is enough to warm Sub-Zero’s icy heart, but Mortal Kombat was a B-movie that acted accordingly. Our expectations are a tad higher now.

Why is the new Tomb Raider a decent bet to buck the trend? For starters, the original established a not-terrible foundation on which to build. No, 2001’s Lara Croft: Tomb Raider was not a runaway success at the box office ($274.7 million off a $115 million budget; studios generally like to triple their investment), nor was it a critical darling. But the movie did have two distinct things going for it: an in-her-prime Angelina Jolie – a force on screen – and a playful vibe that sucks you in for a couple of scenes anytime you stumble across it on cable.

Roger Ebert noted as much when he wrote, “Lara Croft: Tomb Raider elevates goofiness to an art form. Here is a movie so monumentally silly, yet so wondrous to look at, that only a churl could find fault.” The sequel sucked, but the first go around ain’t awful.

That doesn’t mean the reboot will be any good or even resemble the original, but Hollywood’s mindset is slowly starting to catch up to reality. The worldwide game industry generated $91 billion in revenues last year; clearly, there’s a market for this content. As such, studios have started approaching the material more seriously, even if recent results don’t reflect that change.

Last year’s Warcraft was the CGI equivalent to the New York Knicks’ season, but there was a lot of intrigue when writer/director Duncan Jones (Source Code, Moon) first signed on. I fell asleep in Assassin’s Creed, but I took note when two-time Academy Award nominee Michael Fassbender was first cast. Dwayne Johnson AKA Beyonce for boys is headlining Rampage, based on the classic arcade game, next year (don’t mention 2005’s Doom). We’ve come a long way from Wing Commander starring Freddie Prinze Jr. Heavy hitters are starting to sign on to video game movies and that includes the Oscar-winning Vikander. Sooner or later, the talent is going to win out.

Speaking more broadly, audiences are finally realizing that ladies can be badass too. The Hunger Games, Gravity, Lucy, Star Wars: The Force Awakens and Rogue One are all examples of moviegoers showing up in droves for big budget offerings built around women. Wonder Woman and Captain Marvel will most likely continue that trend, so why not Tomb Raider? Recent history suggests that the formula works if the product is good.

Again, I have no idea if Tomb Raider will be a buried treasure, but the timing feels right for a video game movie to really breakout. You’ve got an ascending star flanked by a similarly strong cast (Walter Goggins, Daniel Wu, Dominic West) bringing back a popular-enough movie franchise and a beloved video game series. The social climate has been kind to recent female features and studios want these kinds of projects taking off. All that’s missing is the audience.

Can Tomb Raider break Hollywood’s video game curse or will it become just another buried artifact of a dusty genre? 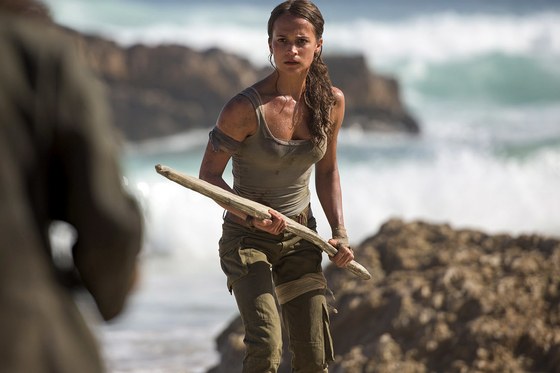