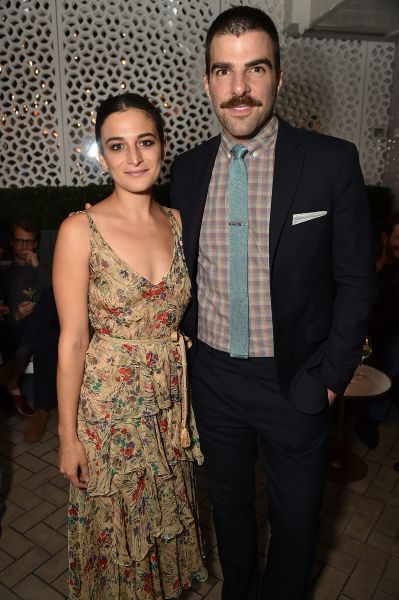 In Aardvark, Josh (Zachary Quinto) has a hard time making friends and keeping jobs, in part because he keeps hallucinating that his famous TV star brother, Craig (Jon Hamm), comes to him in disguises ranging from a black police officer to a homeless woman (“method acting,” as “Craig” explains). As a result, he seeks help from Emily (Jenny Slate), a therapist with a disastrous personal life made much worse when she starts dating the “real” Craig. Premiering as part of the US Narrative Competition at the Tribeca Film Festival, Aardvark, written and directed by Brian Shoaf, manages to sidestep the potential twee-ness of the premise and instead delves deep into its lead trio’s damaged psyches as they try to salvage their troubled lives. We spoke to stars Jenny Slate and Zachary Quinto about their experiences on the film, as well as their thoughts on their highly dysfunctional characters.

Zachary, what drew you to this project as a producer, and did you always intend to star in it?

Zachary Quinto: Interestingly, Aardvark was sent to me probably about like a year and a half or two years before we actually made it. I’ve known Brian Shoaf since we went to college together. He’d had different producers and actors attached to the movie, and he’d sent me the script to consider for Craig. I read it, and I thought the script was really interesting, but it wasn’t exactly what I was looking to do from an acting perspective, so I let it go, and then that version of it kind of unraveled over time. After that, Brian was looking for new partners, and it came back around for us to produce, and I read it again and said, “Look, I’m totally into this, and I want to support you as a filmmaker, and we have the infrastructure to do that, but I feel like I’d be more interested in playing Josh. How does that look for you?” And he was really excited about the collaboration, and so, that’s how it took shape. We then came on board and started to develop it with him further, and I sent it to Jenny and Jon, and it just worked out.

Jenny, what interested you in this script and character?

Jenny Slate: Well, when Zach sent me the script, I was just so taken aback by how complex and viney it was. We were talking to Brian the director, and I was saying the movie is a lot like meeting a person, in that it isn’t one thing and it changes and grows and if you want to get a handle on it, you have to be with it during the growth. That’s what the script is like. It’s constantly disorienting, and it’s relentless and full of energy. It sort of puts you into a trance while at once making you constantly look for your footing, and what I liked about it was that even though there are shifting mental states and states of reality and it’s sort of hard to figure out who the main character is, that all goes away because you eventually have no choice but to focus on the pain that these people feel within their identity. Right there, that’s a lot of work for an actor to do. I’m also constantly interested in things that are either super smack in the middle of my wheelhouse, where I’m just like, “Wow this is gonna be so fun. It’s gonna be like hitting a tennis ball with a Louisville slugger. I’m just gonna slam this thing.” Usually, for me, that’s like a blown-out weird comedy or something that’s like “Ohh, this reminds me of the times when I’m confident enough to really take a walk through my own darkness.” That’s more like what this was like.

Obviously, the tone is somewhat established in the script, but how did you two, in your performances, try to strike the right tonal balance?

ZQ: Yeah, the tone was something that we spent a lot of time with Brian talking about, and it was probably the biggest consideration that he had in pre-production. The biggest challenge for him as a first-time filmmaker, I think, is to strike that tone and then maintain it, not only in the performances but also in the aesthetic style of the film. There were a lot of meetings in our production office between Brian and Eric Lin, our DP, that I would sit in on and the hallucination sequences were something that we really wanted to find the right visual language for, so that we didn’t give too much away, but we also didn’t mislead the audience. So tone was really important, and there was a lot in the script that we were able to identify with as actors, but then it was about Brian’s ability to create that foundation that we were all working from, and I think he did a great job of it. I think humor is key. It was one of the reasons why Jenny was somebody that we thought of immediately because while there is a complexity to her character and what she’s longing for and what she’s not able to find for herself, there’s also a lot of humor in that situation.

JS: Her situation is such a nightmare. She’s just living in a house by herself, nothing has any energy. It’s neither important nor unimportant. It’s so bland. What a crazy dead zone, but she’s not even filled with enough direction to feel beleaguered. She’s constantly like, “Ughh!” There’s a scene where she’s putting her groceries down and picking up boxes and dropping her keys and it’s just like, all this shit is happening and no one even fucking cares, you know? And she’s so used to it that when people are saying to her, “You’re really bad at reading people,” you know, she’s just absorbing those things. It’s bothering her, but it’s also the norm and that’s a terrible state to be in. So, in that moment with the boxes and the groceries, that’s when Craig enters. There’s a way to see him as a metaphor for her needing a change. For that weird shit that happens to you that just shakes you out of your rut.

ZQ: I think one of the interesting things about the exploration of the therapeutic relationship is the preponderance of therapists who actually are not equipped to take care of themselves and channel their energy into trying to take care of other people. It’s more prevalent than we think or know, and that’s a very interesting exploration, I don’t think she’s a good therapist and I think Craig is kind of right. She doesn’t have the tapestry in her own life to be able to draw from in order to help other people, and that’s probably a real disadvantage for somebody who wants to be a therapist.

JS: Yeah, the movie isn’t interested in redemption. It’s not about like whether or not she becomes good at the end, because the weirdest thing about life is like, some weirdo will be good for some other weirdo eventually. I think I would hate for her to be my therapist. It bothers me that she’s so exposed. She can’t really control herself or hide her feelings. She seems incredibly inappropriate, and a lot of her feelings aren’t that passionate.

There’s so much mystery in the movie, not just about whether certain characters are real or not, but also, even in Emily’s past, there are little hints of things that happened…

JS: Just so much busted-up shit with men that aren’t good enough for her. [laughs]

Exactly. For both of your characters’ mysteries, was that something that Brian went through with you or did he leave it to you to fill in those gaps on your own?

ZQ: I mean I think you see a lot more of the relationships in Emily’s past than you do in Josh’s past, and so, for me, there were a lot more things that we had to come up with, like the parents and the circumstances around Craig’s decision to leave and how exactly Josh was able to provide for himself and survived all these years in Craig’s absence. I think those were all things that we needed to have clear points of view on, and Brian and I spent a lot of time talking about them. You don’t necessarily have those answers in the context of the film, but we have those answers on the creative side that hopefully inform who those characters are and how they move through the world of the film. The joy of Emily’s story, though, is that you really get to see some of that stuff, and I love those scenes with her ex on the trails and in the office of the psychiatrist who was her professor. What’s his name?

JS: That guy. That guy made me laugh so hard. [laughs] I mean, you have to do the scene and be like, these characters were in a relationship with each other, but whatever she did to make him call her a slut, you know, I’m just like, “What a disaster.” He’s a handsome older man, who probably was in a position of authority, and that’s kind of sexy sometimes, but it’s just, whatever happens, she walks into that room and he, like, grows fangs. He’s almost a bitch to her. Like he wants her out and you don’t see her as a person of power in that way, so you’re like, “Ugh, this woman’s been making mistakes with people forever. This is just unbelievable!” What a terrible existence. [laughs]

Aardvark plays at the Tribeca Film Festival, which runs through Sunday, April 30.