If you’ve watched as much LGBT cinema as me, you would know two things for sure: you’re definitely gay, and gay coming-of-age dramas can often be very, well, dramatic. A straight-laced father doesn’t approve, a small-town romance goes awry, a boy with delicate features gets ATTACKED?!

But in the lovely Brazilian film The Way He Looks, the protagonist’s homosexuality is not an overwrought plot point, and more notably, neither is the fact that he is blind. Instead the film offers something much deeper, and what is not said makes it refreshing, and beautiful.

The 2014 film by Daniel Ribeiro, in Portuguese but on Netflix with subtitles, centers around three high-schoolers: blind and sweetly introverted Leonardo (Ghilherme Lobo), who has a newfound kick for independence, best friend Giovana who longs to be something more and Gabriel, a new addition to the class whose arrival makes Leo question his sexuality for the first time. The film is an extended version of a Youtube short that went viral back in 2010, solely intended to raise funds for the feature. It’s lovely, and as you’d expect the movie makes all the best parts better.

Newcomer Gabriel, who also captures the attention of female classmates, becomes fast friends with Leo, doing homework with him and guiding him home from school, arm in arm. Previously this adorable task was assigned to Gio, who suddenly finds herself cast aside. Can they figure out their differences? And is Gabriel even romantically interested in Leo? It’s not yet clear.

Instead of disability being used as an emotional crutch by the filmmakers, Leo instead faces all the trappings of a typical highschooler. He’s tired of his parents coddling him, sneaks out of the house, longs to study abroad and cranks up the stereo in rebellion (albeit to classical music.) With his new friend Gabriel, Leo is able to come out of his shell, perhaps finding love and even more rare, his place in high school.

Also, we don’t see Leo struggle with his sexuality on screen. When he comes out to his gal pal, he does so with confidence. “I think I’m in love with Gabriel, like a boyfriend in love,“ he tells Gio, during a super-chill outdoor party that seems like the sort of thing they have all the time in Brazil. She takes it hard at first, but only because she realizes she’s not getting un-friend-zoned anytime soon. And when the topic comes up with Leo’s mom she’s cool about it too. No one, even Leo’s occasional bullies, are that evil. It’s truer to life. And nice.

The writing and production quality are solid enough, but by choosing to opt out of these tropes, The Way He Looks is a winner. Instead, we get something more understated and tender, a great formative tale for anyone who needs confidence instead of fear or camp in their LGBT film selection. In fact, this movie could’ve done ME a whole lot of good in high school — and like three avoided fake girlfriends. Honestly being a teen in Brazil seems great in general. Everyone kisses each other on the cheek!

And sure, there’s drama. But it’s high school drama. Like saying your drink is empty so you can leave an awkward conversation or pretending you were too drunk to remember a gay moment (actually that’s not just reserved for high school, OKAY). We’re treated to a charmingly sun-bathed montage of afternoon pool sessions, late night bicycle rides and the stylings of Belle and Sebastian. Their tune “There’s Too Much Love” serves as the score for a very cute dance scene and one of the lyrics as the film’s title. But also The Way He Looks is a not so subtle play on words. As you don’t need to literally see a person to fall in love with them. It’s a feeling, and when it’s there, sometimes you just know.

Other great things to watch this weekend:

Catastrophe — Season 3: Rob Delaney and Sharon Horgan’s great dark comedy has a similar premise to Knocked Up, not in a bad way, but then takes us much further into home-making and family-making hijinx. Also Delaney is a great Twitter follow, not that you didn’t know!

Damn: Kendrick Lamar’s fourth studio album — consisting of all one-word tracks and collabs with Rihanna and U2 (!?) — has arrived earlier than expected. Even if you’re not an active fan of his lush, challenging songwriting this deserves at least one listen by Monday. You’re not THAT busy. 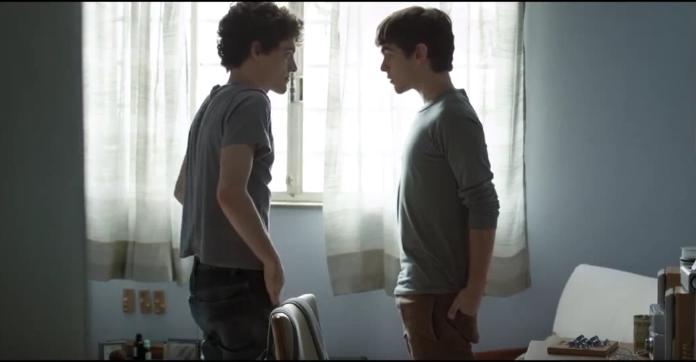