Youth leaders and elected officials are calling on the city to use this budget season to adopt their “School Justice Agenda”—which calls for ending the school-to-prison pipeline by replacing the NYPD’s 5,511 School Safety Division personnel with guidance counselors and social workers.

Developed by the Urban Youth Collaborative—a coalition of liberal groups—the agenda calls on the city to remove police officers and metal detectors from school buildings and to end arrests, summonses and juvenile reports for non-criminal violations and misdemeanors. The agenda also includes increasing the number of trained and supervised guidance counselors and social workers, funding employment programs and implementing subsidized subway fares and unlimited student Metrocards.

Donavon Taveras, a 17-year-old member of the group Make the Road New York, blasted what he called “a racist system that pushes black and brown students out of school rather than empowering them and supporting their academic journeys.”

“I want to emphasize the systemic racism of this dangerous and vicious cycle,” Taveras said. “Youth from Make the Road New York and Urban Youth Collaborative believe that we must remove all police officers and metal detectors from schools and summonses and arrests for non-criminal violations and misdemeanors and replace it with restorative practices.”

Indeed, he noted that students are “greeted by police officers and metal detectors” before they get to class in the morning, lamenting their treatment as delinquents “before we are considered academics and humans.”

The unveiling of the agenda coincides with the release of a joint report by the Urban Youth Collaborative and the Center for Popular Democracy that found that each year, funneling students into the criminal justice system in New York City costs more than $746.8 million—a minimum of $397.6 million in direct investments through the city budget and $394.1 million in social costs, including $108 million in lost tax revenue.

Kate Terenzi, an Equal Justice Works fellow at the Center for Popular Democracy, told the Observer following the press conference that their proposal puts forward ways to keep communities and schools safe. She argued the city could achieve restorative justice by investing $66 million, which she said is only 18 percent of the NYPD’s School Safety Division budget.

The report stated that the division’s budget is more than $357.1 million.

She also noted that the Trump administration has indicated that individuals can be eligible for deportation just by being charged with an offense, which “really makes our immigrant communities more vulnerable.”

“There’s a lot of ways that we could be pulling back on policing and one of the key ways is to stop issuing summonses and arresting students for low-level violations and misdemeanors in the city,” Terenzi said. “Right now, there are over 1,600 students each year that go to court for these. We believe that that does not keep our communities safe.”

City Councilman Carlos Menchaca, chairman of the City Council’s Immigration Committee, said that the city’s budget “has to respond to the youth,” echoing the calls for social services and counselors in schools. He got the youth in attendance to join him in a chant directed at the mayor.

“Mr. Mayor, New York City Council, the city of New York, we are the youth!” Menchaca chanted. “We are the future. Say no to cops and yes to counselors! End the summons in our schools now! Invest in youth of color. Invest in our immigrant youth. Invest in our LGBT youth. Listen to our voices. We will be heard.”

Manhattan Borough President Gale Brewer reported that, since President Donald Trump won the election last November, people have reported that incidents of harassment in schools “have skyrocketed and many feel that they do not have the tools or the resources to deal” with it.

“In the last few years, the Department of Education has hired 100 mental health consultants for campuses, but these consultants are not enough,” Brewer said. “They handle 55,000 students, just about one-third of Manhattan public schools particularly. Each consultant on average needs to serve 10 different campuses.” 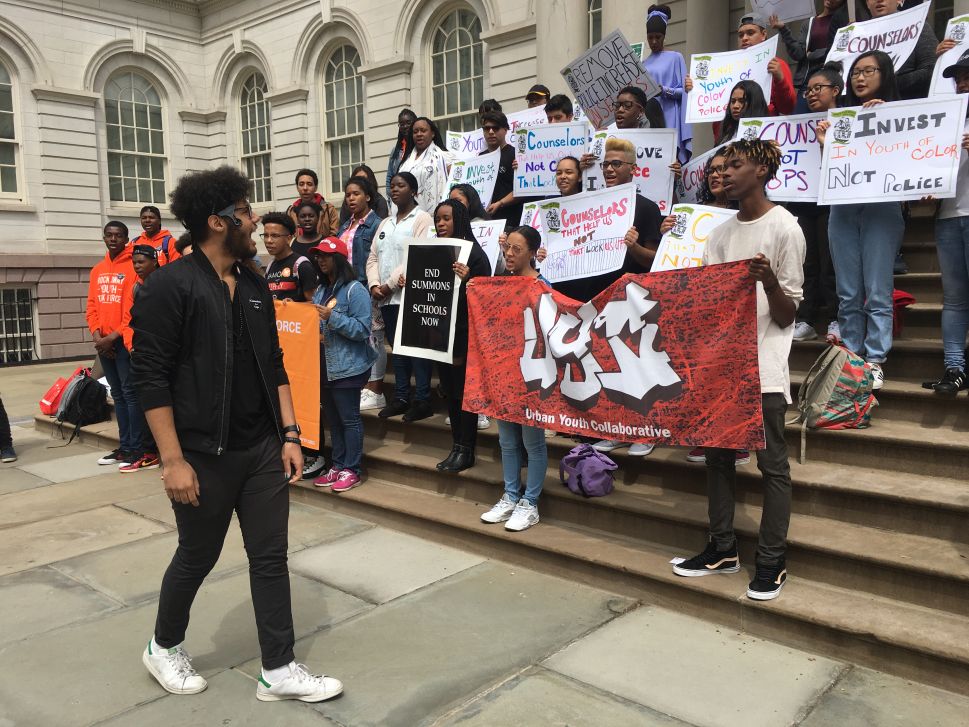