If you follow me on Twitter/are friends with me on Facebook/have seen me on the street any time in the past 6 months then you almost certainly know: I wrote a book! A real book! A book that adults read and decided to print on actual paper and put between a real-life cover and put in honest-to-goodness bookstores. And it comes out tomorrow!

But as it turns out, writing a book doesn’t automatically make you the relatable heroine in a romantic comedy. (I do not own a single fountain pen or slouchy blazer. For shame.) Writing a book is really, really hard (surprise, surprise) and getting it published is a long goddam slog. Here’s everything I learned along the way.

1. It takes a while. A really long time.

I signed the contract with my publisher, Penguin/Razorbill in the late summer, early fall of 2015, and my book doesn’t come out until tomorrow, May 2, 2017, nearly two full years later. And I was on the fast track in terms of publishing!

For most debut authors, in order to sell your first novel, you have to write the entire thing, edit it, and then send it out to agents. Wait a few months. If an agent decides to sign you, he or she will give it another few rounds of editing before sending it out to publishers. Wait another few months. If a publisher bites, congrats! They’ll sign you and you’ll be able to get started with even more edits.

Because I already had an agent (who had seen my stuff on my parody Twitter accounts) I got to skip that first round of waiting. And the good people at Penguin/Razorbill liked my parody Twitter stuff too and reached out to me, which also cut down on waiting time. And still, even then, it was pretty much a full two years from the excitement of “I got a book deal!” to the excitement of “I got a book!”

2. And there are more rounds of edits than you think.

It’s romantic to imagine that every artist is a brilliant lone wolf savant who sends his pages by carrier pigeon to an awestruck editor who sends them out into the world as is, but that’s really not how it works (unless you’re like, Jonathan Franzen, maybe. I don’t know how things work for him.) In my experience, you go through a round of edits with your agent, and then multiple (read: three or four) rounds with your editor. The first are big, broad-stroke plot related things—I deleted full subplots, added chapters, changed settings, altered the ending—and then things get more and more specific until you’re just approving basic copy editing.

3. Authors have very limited say in the cover design.

It’s wonderful when people tell me that they like the cover of my book (I do, too!) but my response is usually, “Thanks! I had nothing to do with it!” If you go the traditional publishing route (aka not self-publishing) there will be an entire team of people who work at the publishing house who make your book look like a book. My editor sent me the cover design when it was done, and I loved it. If an author has really strong feelings, I’m sure they can voice them, but I was lucky to get a really pretty cover (I mean, objectively, right?) on the first try.

4. And even the title may be decided by the editor.

My editor and I went back and forth on the title forever. A book, even a book written by you, is a collaborative process. And editors know what sort of titles catch reader’s eyes and make sense for certain demographics.

Unless you get really lucky, or you’re insanely brilliant, or you’re a former president, chances are you’re not going to make a seven-figure or even a six-figure advance. No one goes into the writing business to get rich.

6. And chances are, your publisher won’t send you on tour.

Again, unless you’re Jonathan Franzen, or Zadie Smith or a celebrity already, the publishing house isn’t going to fly a debut author around the country to sign books. That comes later, if your book does really well, for your next book.

7. You have to do a lot of promotion.

If you PRE-ORDER MY BOOK TODAY (4/28) I will make a terrible drawing of you on a post-it note on my desk https://t.co/zmYXoQ2vWW pic.twitter.com/xqwpCsFgCJ

Yup, a lot of the promotion comes from you: if you want to get the word out about your book, you’ll constantly be reaching out to friends and family, in both real life and via social media, to remind them that you wrote a book and that it is available for purchase. I have talked about my book on Twitter nonstop for months because I’m excited, yes, but also because I really, really want people to buy my book and read it.

8. You’ll sometimes forget the details of the book.

I wrote this book two years ago and it’s gone through so many edits that sometimes I find myself almost about to talk about a major plot-point that got cut out of the book. I think it also has to do with me not quite being able to read the thing straight through—I get excited and embarrassed seeing my own words in print. It’s like hearing a recording of your own voice, or a video of yourself.

This isn’t just me, right?

10. You have to get used to a little bit of attention…

People will talk about your book! And they’ll want you to talk about it! That means talking about yourself too. Interviewers will ask you what your inspiration was, what parts resonated with you, what books you loved growing up. People imagine authors as reclusive vampires who hide with their notebooks and typewriters in their messy bedrooms and even though that stereotype is mostly accurate (especially given my blindingly pale skin), writer vampires learn quickly that they need to be able to talk about themselves and not begin hissing.

11. And practicing your signature.

Look at me, signing books like I'm a real author or something pic.twitter.com/RVAV3nDls7

I have signed like, less than fifty books, and I already forgot how to spell my own name. It’s like when you repeat a word over and over again that it loses all meaning (has “bowl” always been spelled like that? Bowl. Bowl. Bowl).

HOW AM I GOING TO SLEEP TONIGHT WHEN TOMORROW A BOOK THAT I WROTE, WITH WORDS THAT I PULLED OUT OF MY VERY OWN HEAD, WILL BE AVAILABLE FOR PURCHASE?

Some people are not going to like your book. That’s just how things work. Some people don’t like Ernest Hemingway, or Joan Didion, or John Steinbeck (personally, I thought The Grapes of Wrath was a little boring.) Understanding that, and being okay with it, and fighting the impulse to respond to every single person who doesn’t give you 5 stars on Goodreads and challenge them to a fistfight is an important part of being an author.

Writing a book and getting it published has been a dream of mine since I was a kid, and now I’ve done it, which is amazing! I’m really proud and excited. But I’m still very messy and leave clothes on my floor, and forget to get my eyebrows waxed and end up finishing the pint of ice cream and press snooze too many times and never go jogging. I am still the same person I was before I wrote a book.

15. But it feels pretty goddam good.

AND WE’RE OFF is available on Amazon and at your local booksellers May 2, 2017 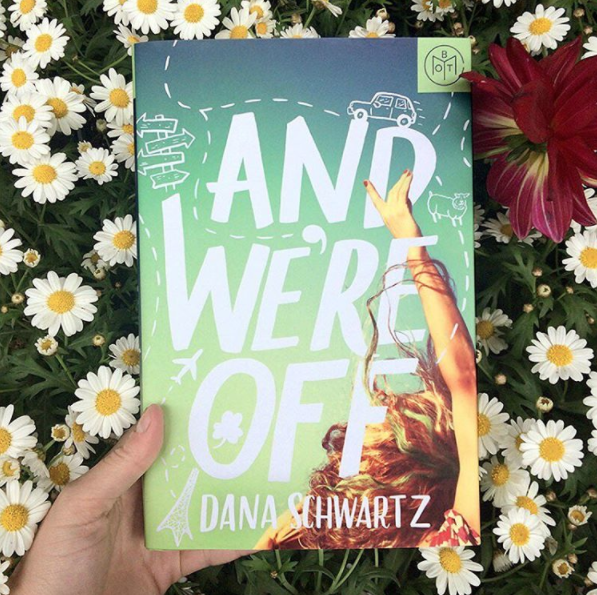