That quote kickstarted my own reading habits and helps me regularly read over 100 books a year.

Charlie Munger is the billionaire business partner of Warren Buffett and the Vice Chairman at Berkshire Hathaway, one of the largest companies in the world. He’s also one of the smartest people on the planet — his lecture on the psychology of human misjudgment is the best 45 minutes you might spend this year.

Over the years Munger’s compiled a list of book recommendations that has served me well. A lot of these books will help you become more valuable by seeing the world for what it really is and gaining unique ideas and insights.

It’s a combination of scientific biography and explanation of the physics, particularly relating to electricity. It’s just the best book of its kind I have ever read, and I just hugely enjoyed it. Couldn’t put it down. It was a fabulous human achievement. And neither of the writers is a physicist.

…it’s pretty hard to understand everything, but if you can’t understand it, you can always give it to a more intelligent friend.

3. Fiasco: The Inside Story of a Wall Street Trader
I remember reading this shocking book and thinking, holy shit. This book will make you sick.

4. Ice Age
Of this book Munger said: “(The) best work of science exposition and history that I’ve read in many years!”

5. How the Scots Invented the Modern World
A lot of really important stuff like: the first modern nation, the first literate society, the ideas for (modern) democracy and free markets, all originated with the Scots.

6. Models of My Life
An autobiography of Nobel laureate Herbert A. Simon, a remarkable polymath who more people should know about. In an age of increasing specialization, he’s a rare generalist — applying what he learned as a scientist to other aspects of his life. Crossing disciplines, he was at the intersection of “information sciences.” He won the Nobel for his theory of “bounded rationality,” and is perhaps best known for his insightful quote “A wealth of information creates a poverty of attention.” (Also part of five books that will change your life.)

7. A Matter of Degrees: What Temperature Reveals about the Past and Future of Our Species, Planet, and Universe

…a wide-ranging exploration of how the fundamental scientific concept of temperature is bound up with the very essence of both life and matter.

8. Andrew Carnegie
The definitive biography of an industrial genius, philanthropist, and enigma. At the meeting in May of this year, Munger also mentioned the Mellon Brothers as people to study.

9. Guns, Germs, and Steel: The Fates of Human Societies
A book recommended by Bill Gates and Charlie Munger! Gates said, the book “had a profound effect on the way I think about history and why certain societies advance faster than others.”

10. The Third Chimpanzee: The Evolution and Future of the Human Animal

What is it about that two percent difference in DNA that has created such a divergence between evolutionary cousins?…renowned Pulitzer Prize–winning author and scientist Jared Diamond explores how the extraordinary human animal, in a remarkably short time, developed the capacity to rule the world…and the means to irrevocably destroy it.

11. Influence: The Psychology of Persuasion
A frequent and persistent recommendation from Munger. I believe he’s given away more copies of this book than any other. Here is a quick overview.

Dawkins explains how the selfish gene can also be a subtle gene. The world of the selfish gene revolves around savage competition, ruthless exploitation, and deceit, and yet, Dawkins argues, acts of apparent altruism do exist in nature. Bees, for example, will commit suicide when they sting to protect the hive, and birds will risk their lives to warn the flock of an approaching hawk.

14. Titan: The Life of John D. Rockefeller, Sr.
At 800 or so pages this is the perfect book for a week-long vacation. From humble beginnings to the height of great power Rockefeller did it all. I think you’ll find he has more in common with Marcus Aurelius than today’s billionaires.

Born the son of a flamboyant, bigamous snake-oil salesman and a pious, straitlaced mother, Rockefeller rose from rustic origins to become the world’s richest man by creating America’s most powerful and feared monopoly, Standard Oil. Branded “the Octopus” by legions of muckrakers, the trust refined and marketed nearly 90 percent of the oil produced in America.

15. The Wealth and Poverty of Nations: Why Some Are So Rich and Some So Poor
A best-selling exploration of why some nations achieve economic success while others don’t. As you can imagine, it’s complicated.

16. The Warren Buffett Portfolio: Mastering the Power of the Focus Investment Strategy
This book has been recommended by both Buffett and Munger on a few occasions.

17. Genome: The Autobiography of a Species in 23 Chapters
Science writer Matt Ridely unfolds the genome for us. Munger recommended this work in 2001.

18. Getting to Yes: Negotiating Agreement Without Giving In
The book is one of the primary business texts in North America. So it shouldn’t surprise you that I was first introduced to this as part of my MBA program.

19. Three Scientists and Their Gods: Looking for Meaning in an Age of Information
What is the meaning of life? This book takes a look at the work and beliefs of three leading American scientists: Edward Fredkin, Edward O. Wilson and Kenneth Boulding.

20. Only the Paranoid Survive: How to Exploit the Crisis Points That Challenge Every Company
Andy Grove gives us an inside account of how he, virtually overnight, changed the path of Intel forever. Here’s a sneak peak into one of the best business books around.

21. No Two Alike: Human Nature and Human Individuality
Judith Rich Harris is a great detective and systematically works her way though the currently popular explanations, such as birth order, and explains why none of these solve the mystery of human individuality. We explored this book in detail on Farnam Street see part 1 and part 2.

22. Darwin’s Blind Spot: Evolution Beyond Natural Selection
Frank Ryan takes the view that cooperation, not competition, is a factor in natural selection. The dependence, for example, of flowering plans on insects and birds for pollination is symbiosis, or cooperation. Mixing symbiosis with Darwin’s theory we come to a more accurate picture of the natural world.

23. Man’s Search For Meaning
The book sheds light on the horrible experiences of Auschwitz and what they taught Viktor Frankl about life, love, and our search for meaning. When all seems hopeless, why is it that some people push forward while others subside.

24. The Blind Watchmaker: Why the Evidence of Evolution Reveals a Universe without Design
In the eighteenth century, William Paley argued that a watch is too complicated to happen by accident and so too are living things. Darwin undercut that argument with his discovery of natural selection and here Dawkins offers an elegant riposte. Natural selection has no purpose, it is an unconscious, automatic, and blind watchmaker.

25. Judgment in Managerial Decision Making
This is hands down the most useful book on management decision-making that I’ve ever read. Seriously. Max Bazerman does a great job of brining together the mental models of human misjudgment.

26. The Language Instinct: How the Mind Creates Language
Steven Pinker, one of the world’s foremost experts on language and the mind, explores how language works, how we learn it, and how it evolves. He lands on the site of language being a human instinct, birthed by evolution.

27. Master of the Game: Steve Ross and the Creation of Time Warner
This is a biography of Steve Ross, whose career spanned from Wall Street to Hollywood, by an award-winning journalist. Ross was a polarizing figure, both revered and reviled, who sought out risky deals culminating in the empire of Time Warner.

28. In The Plex: How Google Thinks, Works, and Shapes Our Lives
This book is no surprise to those who follow Munger closely. He loves learning about engineering cultures.

29. A Universe out of Nothing
Bestselling author and acclaimed physicist Lawrence Krauss looks at the biggest question of all: how everything that exists came to be in the first place. “Where did the universe come from? What was there before it? What will the future bring? And finally, why is there something rather than nothing?”

30. Barbarians at the Gate: The Fall of RJR Nabisco
A fascinating look at corporate America and Wall Street culture during the 80s by a masterful storyteller.

31. The Outsiders: Eight Unconventional CEOs and Their Radically Rational Blueprint for Success
A book by William Thorndike detailing the extraordinary success of CEOs who took a radically different approach to corporate management.

32. Distant Force: A Memoir of the Teledyne Corporation and the Man Who Created It, with an Introduction to Teledyne Technologies
Henry Singleton, the creator of Teledyne detailed in this book, was one of the eight unconventional CEOs mentioned above. If there was a businessman hall of fame, Singleton would be on the first ballot.

33. Hard Drive: Bill Gates and the Making of the Microsoft Empire
How Bill Gates transformed an industry when everyone was trying to prevent him. Gates wasn’t always the richest person in the world.

34. Fortune’s Formula: The Untold Story of the Scientific Betting System That Beat the Casinos and Wall Street
Our man Claude Shannon comes up again with his fascinating work with John Kelly. Together they applied the science of information theory to make as much money as they could as fast as they could.

36. The Martians of Science: Five Physicists Who Changed the Twentieth Century
If science had a hall of fame the five men from this book, born at the turn of the twentieth century in Budapest — Theodore von Kármán, Leo Szilard, Eugene Wigner, John von Neumann, and Edward Telle — would all be members. Their work underpinned some of the most important political developments of the twentieth century.

37. Einstein: His Life and Universe
Munger, who reads every Einstein biography, considers this one from Walter Isaacson to be the best.

38. Getting It Done: How to Lead When You’re Not in Charge
An interesting book full of practical ideas that takes a realistic view of organizations and asks how, in a world of matrix management and chaos, do we lead when we are not the one in charge? One of the best parts of the book was how to provide feedback.

39. The Autobiography of Benjamin Franklin
One of Munger’s all-time heroes was Ben Franklin. This autobiography was written as a letter of instruction in the ways of the world.

Consider this a look at one of Munger’s many bookshelves.

Two other books that might interest you are Damn Right!: Behind the Scenes with Berkshire Hathaway Billionaire Charlie Munger and, one of my all time personal favorites, Seeking Wisdom: From Darwin to Munger.

And before you email me to tell me how expensive some of these books are consider this: ignorance is more expensive.

Follow your curiosity to Adding Mental Models to Your Mind’s Toolbox. 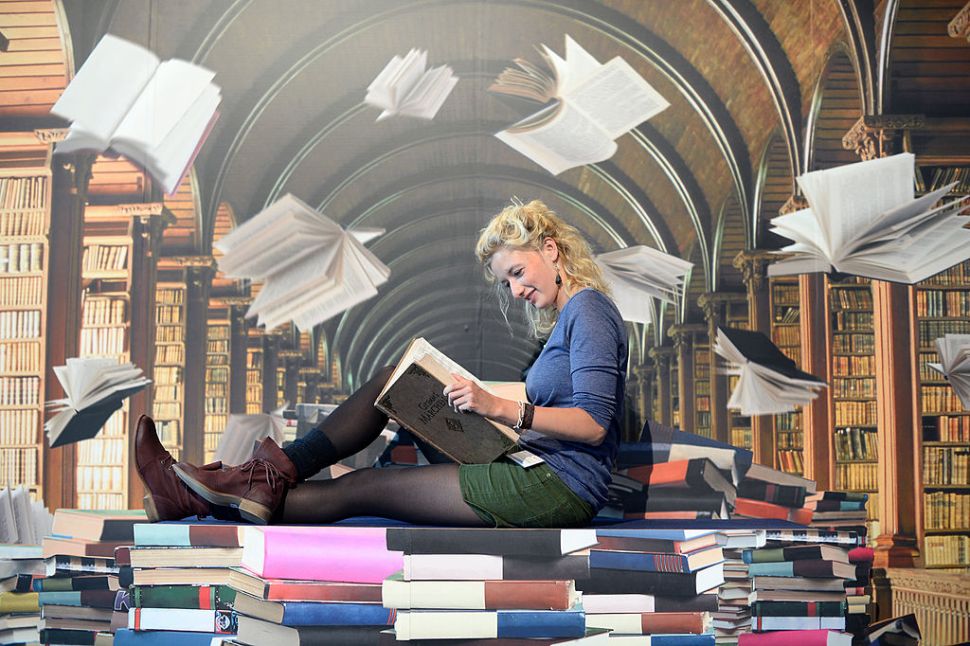