Previously on [A Millennial Reviews]

Greetings readers, after a short hiatus I am happy to report that I have finished sifting through and responding to each and every one of your emails entitled “I SINCERELY HOPE YOU ARE JOKING” and tried my best to assure you all that I am REALLY 19 years old and I AM NOT JOKING. I also spent a healthy amount of my intellectual labor earlier this month writing a scathing think-piece entitled “Homeless People, Stop Begging The Man For Change, Women Can Pretend To Be On Their iPhones Too,” for which I was harassed heavily through the google alert I have set up on my own name. You guys, I should not have to be oppressed by your honest opinions while ego searching my own name. This is literally exactly like in Harry Potter when the alt-Slytherins blew up Neville’s fat parents for voting for Hillary. I don’t care how many of you people think that “the last few Millennial Reviews have made no sense possibly due to a combination of social anomie, a confusing new political landscape that I probably found difficult to comment on, and a 50 hour work week that causes me to pass out from exhaustion while trying to create art like a moron.” You TROLLS can screw off, I have a right to be uncriticized in the most sacred of all places, the online.

ANYWAYS, as I write this it is early in the morning on May 1st aka Loyalty Day, the most sacred of all holidays that we all remember celebrating as kids. We all remember having Loyalty Day barbecue in the back yard, getting the day off school to celebrate at home with our families, and of course, the boring part where you have to go to church to celebrate the ancient traditions of Loyalty Day. Today is the day we honor our premium app memberships, our coffee shoppe punch cards, those jars of skittles and shit that they put out at the bank, and NOTHING ELSE. There is DEFINITELY nothing else going on today. DON’T google it because there is NOTHING else happening on May 1st. Like everyone, I got the day off for this holy holiday and I used my government allotted leisure time to educate myself the only true way we can anymore – by watching something on TV. A lot of people will tell you that you should read books if you want to learn about important social and political issues, but I already read everything I need to know when I was in college getting my degree in gender-studies-studies (the study of gender studies). Reading after the age of 22 is for nerds and Joe Rogans. If you want to learn about race relations in America, you don’t have to read The New Jim Crow, everything you need to know is in Get Out. I swear, if we could just get Trump to watch Get Out all of our problems would be solved. Anyways I learned a lot about the government today watching an important documentary series about the various oblique cultural waves and insidious conspirators that shaped western society in the time leading up to the events of the 2016 election. No, I didn’t watch HyperNormalisation on BBC, I watched The X-Files on Fox.

The X-Files follows two FBI Agents on a mission to figure out the extent to which Russia hacked the 2016 election. Agent Fox Mulder, aka the most depressing Mighty Mighty Bosstone, suffers from the tragic situation of being hot on Russia’s trail while being treated by the rest of the government as a paranoid conspiracy theorist. When he was younger, his sister was actually abducted by a Russian aircraft full of like ten Vladimir Putins. It’s a weird scene. There’s just these 10 naked Putins standing around in a bath of blinding white light like they’re at the Apple Store or something. Someone tried to tell me that they’re supposed to be aliens but I’d recognize that slim build and squinty face anywhere. Those things are Putins. Anyways Mulder seems like he probably owns a pet tarantula and he also outsources a lot of his work to these gamers who call themselves The Lone Gunmen. I love Mulder. He’s fun to watch. When he believes in things, I believe in them. Sometimes when I watch Youtube for 9 hours and everyone thinks I’m crazy for having figured out that the earth is round but the SUN is flat, Mulder is there for me.

His partner is a Bernie bro named Dana Scully who is clearly just skeptical, rational, calculating, and informed because she’ trying to get a boy’s attention. If there’s anything I’ve learned from the internet, it’s that the only explanation for why a woman could possibly disagree with The Daily Show and the political status quo of the left is that she’s out of her mind and trying to get laid. Every time Mulder has some new insightful take about how Russia is influencing weak minded voters or how vaccinations cause people to play the knockout game she hits him with these obnoxious lectures about how the Democratic Party lost the trust of working class people by gradually abandoning their interests and insulting their agency by publicly suppressing the candidate who represented them the most. Speaking of whom, Bernie Sanders shows up here and there in The X-Files smoking cheap local Vermont cigarettes, reciting income statistics, and trying to discourage Mulder’s hunting of Russian werewolves, ghosts, and circus freaks. Mulder doesn’t give a shit. Many episodes conclude with him in front of a 90s green screen computer, blogging about the inconclusive investigation of the day, never giving up on the #resistance. Scully, on the other hand, spends most of her time in her laboratory being a contrarian and playing devil’s advocate while slicing open a Creature From The Black Lagoon monster and claiming that it was “just a rubber suit with a dead guy inside.” Alright, bro, no one cares. Check your scientist privilege.

Every episode consists of them basically edging in terms of the truth. They’re always getting close to the bottom of a Ping Pong Pizza plot and then having the rug pulled out from underneath them at the last minute. Mulder is frequently poised to deliver a crushing blow to the whole misinformation framework but then everything fizzles in a sort of “Rachel Maddow reveals Trump’s tax return” moment. At least he tries. Scully just stands by and says “Well actually, Mulder…” I don’t know why Scully thinks it’s okay to explain Mulder’s insane job to him like suddenly she’s the expert on sasquatches around the office. It doesn’t matter though, Mulder will always go after the true monster no matter what. Is there a history of embarrassing failed paramilitary action against sovereign nations by the United States Intelligence department of which we are now forcing the deal with the ugly fruits? Not according to Mulder. Hell no, the real problem is an albino sewer monster that looks like if you put a 100-year-old man’s face into Face App and then pressed “old” and then “old” again after that. Has there been an active oppression of progressivism in America in an attempt to discourage people from organizing against a blind worship of the free market, a cultural war that dates back to World War II? Basically, the entire reason that presidential hopefuls have been able to sway the whims of massive amounts of working class voters with no other options for the last half a century? Naw man, Mulder says it’s like this haunted Boss Baby kid who’s actually a siamese twin but he crawled out of his twin and now he eats people. It’s a really good episode. Is it a huge problem that millions of people can’t vote, don’t vote, or live in a state or county where their vote is essentially useless? Is it insane that prisoners are rezoned to traditionally republican counties where their bodies are counted as part of the population yet their votes are not? Fuckin’ shape shifting Tim Armstrong Monster that’s conjured out of an art project and is extremely close to copyright infringing on Candy Man but isn’t actually copyright infringing on Candy Man. These are the real monsters.

The thing that’s unsettling about The X-Files is that it’s various season arcs seem to end on these ambiguous notes that beg uncomfortable questions. Is Mulder correct in inferring that there was a serious surgical infiltration of our democratic process? Is Scully rightfully apprehensive that we may be losing our minds with fanciful delusions that these conspiracy theories are the sole reasoning behind our recent loss of governmental control and that perhaps this whole thing is distracting us from a return to our progressive class conscious roots that could prevent us from losing future elections and quite literally save the world? Is it possible that the two things are not mutually exclusive? Would I get less hate mail if I explained these things without forcing them through metaphors about ancient TV shows where I pretend to like the worst characters and hate the best ones? Would I have a job if I did that? We all want to believe so many things right now. I want to believe, but I have to get up early and go to a Loyalty Day march. 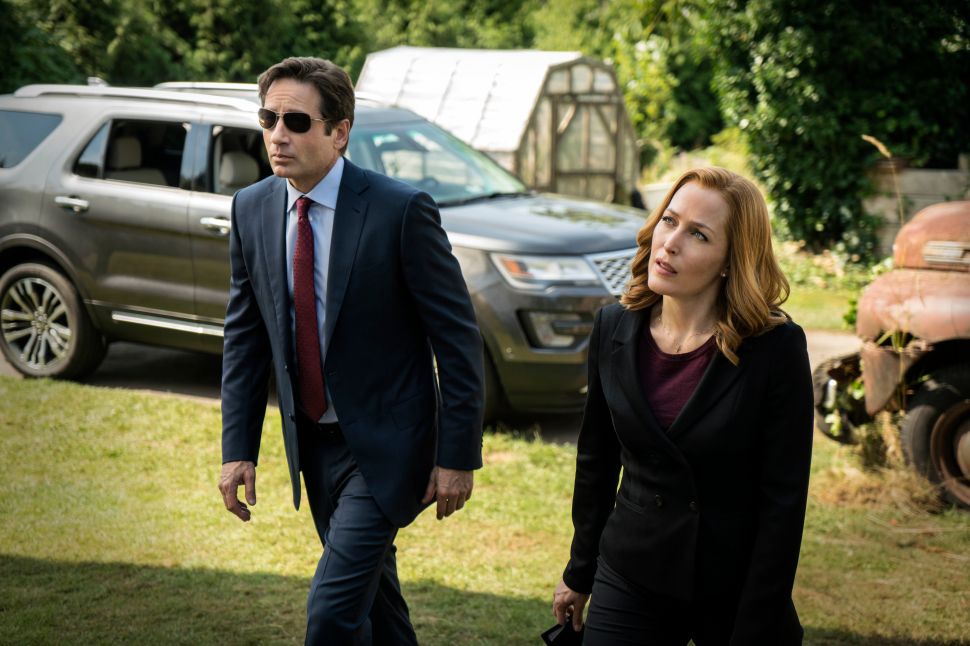