Ghost Rider, Ghost Rider. Does whatever a Ghost Rider does. Drives a car and swings a chain, oh yeah and his head is aflame. Look out! Here comes Ghost Rider. That’s right, Robbie Reyes is back, baby! After disappearing at the end of the first arc, the season finale, “World’s End”, finally brings him and his 69’ Dodge Charger back. Honestly, the finale didn’t blow me away. It’s fine but with an arc as good as Agents of Hydra, the finale didn’t really hold a candle to the rest of the episodes. See what I did there? Candles are lit on fire? Ghost Rider has fire? Good? Let’s get into it.

How do you solve a problem like Aida? Well, no one really knows. Fitz reveals that he had experimented on two-dozen Inhumans in the Framework to give Aida her powers and that he doesn’t know what could possibly stop her. Jemma asks if Fitz even wants to stop her so there’s still some jealousy between them. Yo-Yo is safe, but still in the Framework and unfortunately for her, the Framework is slowly deleting itself and if Yo-Yo doesn’t get Mack in time, they could both be erased. They estimate her having about 12-20 hours before everything is gone.

Aida is still pissed and is doing the angry, sexy flirting thing she does with Anton, which like…it’s good she has a rebound. There’s also a new robot walking around and I have no clue who he is. We’ll call him “Other Russian.” It doesn’t really matter who he is right now though because Ghost Rider shows up demanding the Darkhold. He tosses the robots around like they are nothing and even manages to hit Aida with his chain just before she teleports away. You can tell this is the finale because they are pouring the rest of their budget into these CGI scenes. Aida realizes that she can’t heal the damage Robbie’s chain did to her because the same demon magic that Ghost Rider uses is the same demon magic that made her. Sure why not?

In the Framework, Yo-Yo is rescued from the lab she’s tied up in by our old friend Mr. Holden Radcliffe. Daisy had hacked the system to put yo-yos everywhere Radcliffe was so he knew to come look for her. This is really meant to be the emotional storyline of the finale but I couldn’t shake the fact I knew what was going to happen. It had one logical ending and they stuck with it. I’m not saying it’s bad or poorly done; it’s just predictable and really lessens the stakes. Radcliffe takes Yo-Yo to see Mack as she is determined to make him remember her and leave his daughter—the only person he loves in the entire world. Probably easy right?

Daisy goes to visit Robbie and he should really think about trading his Dodge in for a Lincoln because he is McConaughey-ing it up. Every time Robbie speaks, it’s like he just left a mid-level philosophy class. No one really knows what Aida’s plan is yet and they also don’t know who the Other Russian robot is either which makes me feel better cause I thought I missed something. After a facial recognition search, they find out he’s the senior Russian analyst that’s invited to an inquiry to discuss what to do with S.H.I.E.L.D. The public is angry with S.H.I.E.L.D. because Mace’s autopsy reports were leaked and it was revealed that he wasn’t Inhuman and now they have some valid trust issues. It doesn’t help that Anton is brought into the meeting with the Other Russian and talks about how S.H.I.E.L.D. has been breeding, recruiting, and weaponizing Inhumans. He talks about how the Darkhold can help end S.H.I.E.L.D. and the growing Inhuman threat. The meeting is cut short though as gun shots can be heard outside and then Daisy storms in AND SHOOTS TALBOT!!! WHAAAAAAAAA?!?!

Coulson, Robbie, May and Daisy show up but it’s too late. Now you might be thinking, wait Nick, you said Daisy was the one who shot Talbot in the last well-written and incredibly thorough paragraph—and you are right, the answer: Robots. Cause it’s always robots. Aida made a robo Daisy to kickstart the same fascist regime state from the Framework. By using an attack from Daisy Johnson on the American military, people will grow to resent S.H.I.E.L.D. and Inhumans. Two birds, one stone. Anton and the Other Russian manage to escape but they left behind the Darkhold and now the agents have something Aida wants. Daisy confronts her robo self and we get some really cool team up moves between Quake and Ghost Rider. Like, they are really sweet. So sweet, even Coulson says how disappointed he was that he messed the team up. Since the blame for shooting Talbot (don’t worry he’s alive) is on S.H.I.E.L.D., the team is on the run again. This time though, Coulson has a plan for dealing with Aida.

Yo-Yo is having no luck convincing Mack to come back with her. Radcliffe has to remind Yo-Yo that even if she forces Mack to leave, he could end up resenting her for making him abandon his daughter. She realizes she will lose him no matter what she does. Daisy has installed a new back door for them to get out but it’s up to them to enter it. To make things worse, Hope overhears Yo-Yo talking about how she isn’t real and now they have to deal with the problem head on. As Mack holds on to Hope and promises that he won’t let her go, she disappears in his arms. Mack and Yo-Yo barely escape the Framework together and it is super sad, but you know this is how this story had to end. I was hopeful that they were going to find a way to do what Aida did and make Hope a new body, which I think would have been nice but whatever people never listen to me.

Back at the base, the agents are putting their plan together when Aida teleports in next to Fitz and Jemma and stabs a screwdriver (I think?) into Jemma’s chest. Fitz tries to bargain with her and tells her the Darkhold is with Coulson in hopes Aida won’t hurt anyone anymore. But Aida gets her chance to make her Taylor Swift breakup speech and ELECTROCUTES SIMMONS LEAVING HER DEAD ON THE FLOOR! But remember how the answer is always robots? As Aida teleports to get the Darkhold from Coulson, she is shot by another Jemma! The one she killed was an LMD! Phew. The bullets don’t do much to Aida who heals accordingly, but it was all a distraction! Aida had let her guard down since Robbie isn’t there but it turns out COULSON IS GHOST RIDER!!! AHHHHHHH! The Spirit of Vengence wanted to take down Aida so badly he didn’t mind switching bodies to fool Aida. Aida tries to teleport away but Ghost Rider Coulson has a grip on her and he burns her to a crisp.

It’s a shame. Aida really shaped up to be a great villain and one who managed to make herself quite formidable. I wish it wasn’t as easy to kill her as getting Ghost Rider to simply hold her for a little bit. S.H.I.E.L.D. has always done well to make the agents the real heroes and yes, it was Coulson that killed her, but it just didn’t feel as significant as some of their other accomplishments. So what happened to everyone else? Ghost Rider has returned to Robbie and he mentions that Coulson made a deal with the Spirit of Vengence but we won’t know what that is until later it sounds like. Mack and Yo-Yo reconcile with a kiss and he mentions how Hope reminded him of the life he could have with Yo-Yo, which is sweet in a way. Robbie has learned how to create his own portals and is going to take the Darkhold to a place where it will be safe (at least for a while probably, nothing stays hidden in comics). As for the Framework, Radcliffe is the last soul and as he finishes pouring himself a drink on a beach he disappears. Lastly, Fitz is willing to take the fall for the LMD mess he had helped create but this prompts a stirring speech from Daisy who talks about how separating from the team did more harm than good, and reminds him to stick together and that all of the agents will stand by him. The episode ends with the agents all getting a friendly meal together (very reminiscent of The Avengers and the shawarma scene) and some armed shadowy figures walk in to arrest them. They use a device to freeze them in place, which since we know nothing about these guys, I figured the device might have been a clue or reference to a comic but I found nothing. If you know what it is, please message me on Twitter and let me know cause I’m super curious.

So where were the agents taken? Well as Coulson wakes up and walks to a window we get to see that they are in space! That’s exciting! We don’t know anything else about this except Coulson is apparently working up there. I think it could be they were abducted by S.W.O.R.D., an organization similar to S.H.I.E.L.D. in the Marvel Comics that was created in 2004 by Joss Whedon in his Astonishing X-Men run. It’s lead by Abigail Brand and they do everything S.H.I.E.L.D. does but they handle extraterrestrial threats instead of Earth-based ones. Considering Jed Whedon is a writer, producer, and director for the show, it could definitely be plausible. But that’s it. That’s how the season ends. Nothing else. We don’t know where the other agents are. We don’t know if S.H.I.E.L.D. is shut down. And lastly, where is Anton’s head? He is controlling all of the Anton bodies that Aida made so watch out for that. But we definitely will get our answers since Agents of S.H.I.E.L.D. has officially been renewed for season 5!!! It’s probably because of these amazing recaps but I’ll try and remain humble. And while we wait for the next season, we have the new Inhumans series coming this summer/fall (which I’ll also be covering) so until next time, True Believers! 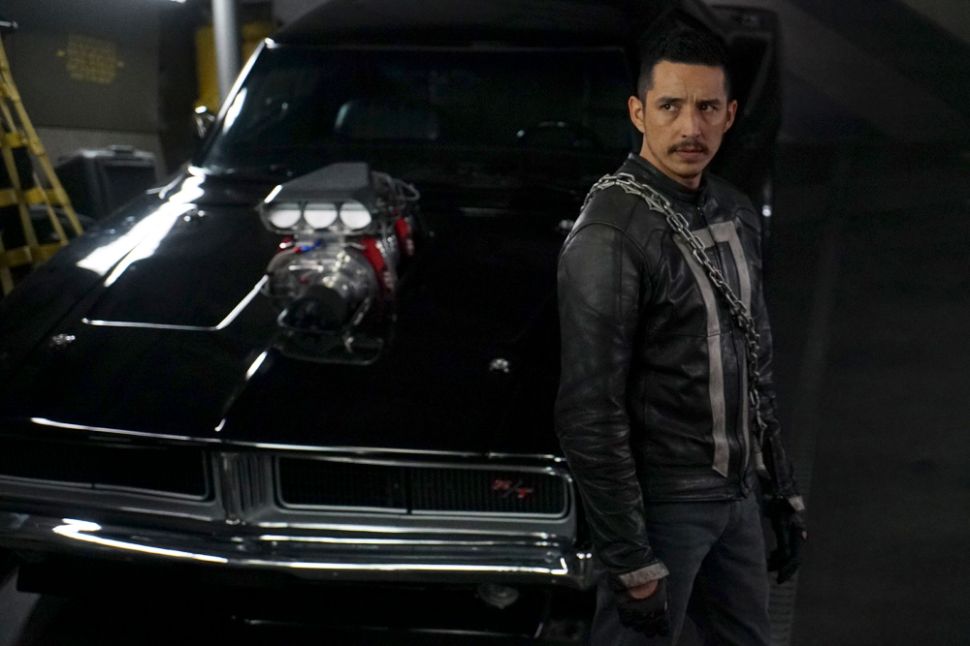