Were you one of the seven people actually wondering what was going on in the real world while everyone else explored the topical political parallels and complexities of the Framework? Well you finally get your chance to see what Yo-Yo and the nameless agents of S.H.I.E.L.D. got up to while Daisy and Jemma slept in a virtual coma. The answer: Nothing. They sort of just sat around and tried to stay busy. They actually are sitting around for so long that power becomes a concern and they don’t want to land because they still don’t know whom to trust. They have to keep the Framwork machines running  at all cost so first they shut off the heat and then they shut off the cloaking – at least we know how Anton found them now.

Inside the Framework, Madame Hydra has issued an order to take down the growing resistance by any means necessary so the agents are going to have to act fast. Jemma and Daisy realize they have to get everyone to the Framework’s exit point, but they realize that may be difficult considering not everyone knows or believes the existence of a second world and then there’s the whole Fitz is a monster thing. Daisy tries to prepare Jemma for the possibility that they may have to come back for Fitz later when they have a better plan. Coulson is really the only agent on board with this plan. Daisy convinces Mack to stay a little longer and help them out but he still doesn’t know about the Framework and May doesn’t believe Coulson when he tries to convince her. Also there are more lines about fake news and Hydra’s alternative history because they only have two episodes left and they have at least fifty more Trump jokes. Jemma can’t accept leaving without Fitz so using May’s Hydra clearance she tracks down Alistair Fitz and has a polite and courteous open dialogue with him – just kidding, she holds him at gun point.

Speaking of Fitz, he visits Radcliffe one more time demanding to know what he told Daisy last episode. Radcliffe is less than willing to cooperate and maybe he’s finally the good guy we all hoped he could be – just kidding, Fitz talks about how the machine they are building can make unlimited organic bodies and how you could upload your consciousness into them and live forever and Radcliffe is like I’ll tell you everything you want to know. Once bad, always bad. So Fitz is on his way to the Frameworks backdoor now that he knows that’s where they will be heading and he gets that phone call from his father. Alistair says how much he loves his son and tells him that Jemma is there and to send backup and in a moment of panic, Jemma and Alistair end up fighting and it ends with a bang. Fitz later finds his father’s body dead on the ground and asks if Jemma really did love him, how could she kill his father (which is like, a good point) but he now swears that the next thing he will do is kill her.

The agents are preparing to go to the backdoor location but they can’t leave until everyone is there. There are some nice character bonding moments like the reunion between Daisy and Trip (who is disappointed to find out he didn’t date any of the S.H.I.E.L.D. women in the real world) and Coulson now being looked at as the leader of S.H.I.E.L.D. and starting to connect with May again. Simmons shows up and she is still shaken up from killing Fitz’s dad, but she is even more scared that she knows Fitz will never come with them now. Daisy has to remind her that it was just data she killed and to not give up yet.

Aida/Ophelia/Madame Hydra is still confined to her bed and finds out about Fitz’s father. She orders Fitz to return but he denies her to go after Jemma and the other agents. This pushes Aida to start the machine and begin the process of printing her new body. Everyone basically arrives at the backdoor location, which was supposed to be a park, but Aida made some slight alterations to it so now it’s an abandoned factory that’s like an 11 on the cliché final battle environment scale. They find a pool of molten steel that when Daisy quakes it open, reveals the portal to the real world. This is where all the drama happens. Mack is pissed because he realizes this isn’t the mission he was promised, Hydra shows up and starts shooting at them, and Fitz shows up to confront Jemma. Phew. Coulson is the first one to try and exit through the portal but is shot on his way. This actually made me start to sweat that we could lose Coulson but luckily with the help of May, the two of them jump through the portal and wake up on the other side.

We get a fantastic emotional scene as Jemma tries to convince Fitz that this isn’t him all the while Fitz holds her gunpoint. Luckily it’s Radcliffe who intervenes and grabs Fitz and tosses him into the portal with Jemma jumping afterward. It’s a nice redemption scene for Radcliffe who tells Fitz that all of this was his fault and not to himself. Mack is next and we get a stand out performance from Henry Simmons who decides that it doesn’t matter that this isn’t the real world, any world without his daughter is one he doesn’t want to be a part of and so Daisy jumps in alone. Jemma and Daisy wake up to Anton’s ship attacking the jet and Daisy has to break the news to Yo-Yo about Mack if things couldn’t get worse. Fitz is freaking out with Coulson and May about everything that he had done in the Framework. He’s dealing with the realization he actually killed Mace but before he can come to terms, Aida walks out in her brand new body. She embraces Fitz and it seems her Framework feelings for him have carried over. May tries to take a shot at her now that she is a vulnerable human like everyone else but before she can HER AND FITZ TELEPORT! I actually screamed, “What!” at my TV. It’s a lot of shocking things to take in as we build towards the finale and luckily we get to end on a bittersweet scene between Mack and his daughter, Hope reuniting in the Framework. Now with the agents back in reality and Aida equipped with super powers (?) we know things aren’t going to slow down. Until next time, True Believers! 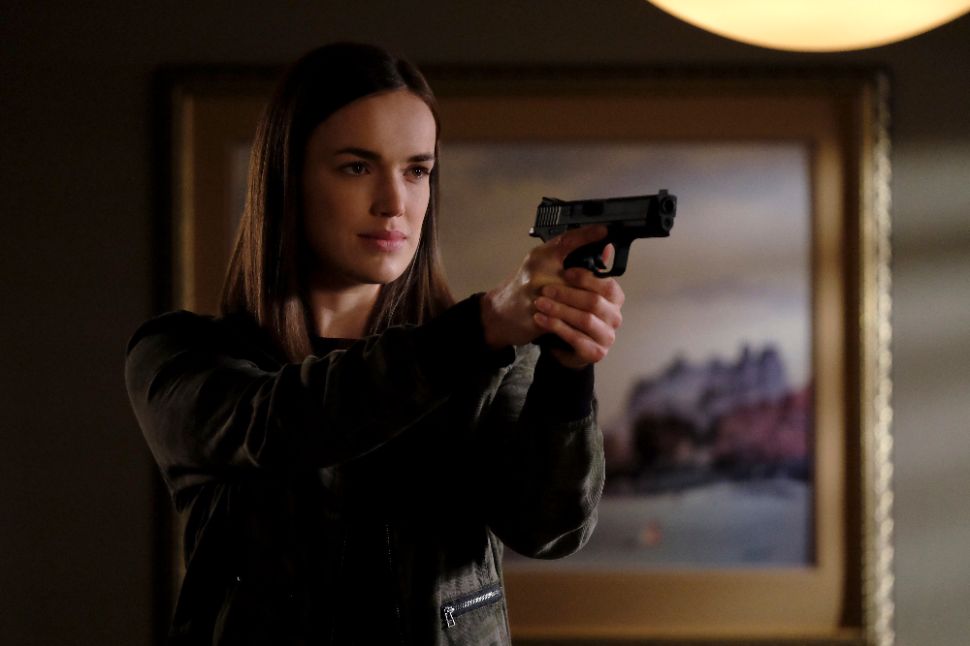