So here it is – the penultimate episode of Marvel’s Agents of S.H.I.E.L.D’s fourth season. These sort of episodes either go one of two ways: either all the crazy stuff happens in this episode and we are left with the fallout and repercussions in the finale, or the show just continues to build to a climax that hopefully has some resolution and doesn’t make us wait months for answers. I can’t speak to the resolution but this episode is definitely a builder.

“The Return” refers to the agents finally returning to reality and having to deal with the consequences and existing memories of their past virtual lives. They still seem to remember everything upon returning, which doesn’t sound too good for our little monster Fitz. May and Coulson are trying to get their bearings when they get interrupted by the Russian, Anton Ivanov. After taking a few shots, they realize he is not going down and Coulson uses his shield to slice Anton’s face off and it’s very cool, I even went “oooooooh” when I saw it but it was a very cool “oooooooh.” Just when they think they got a win, they look outside and find multiple Robo Antons. Damn. On the bright side, the S.H.I.E.L.D. intro logo is no longer Agents of Hydra and is back to normal! That’s good, right? Tell me it is! Meanwhile, Daisy, Jemma, and the nameless agents are still under attack due to their weapons systems still being offline from trying to conserve power but they manage to get the Zephyr back in working order, take down the bogie (cool military term) and head to Anton’s oil rig hideout.

After teleporting away at the end of the last episode, Fitz and Aida now stand on a beach and Aida – or maybe I should say “Ophelia” – is taking in what it means to be human. I mean besides starting a totalitarian regime built on fear and lies, it’s actually kind of nice to watch Aida finally be human. She tries to apologize to Fitz (who is still falling apart) and reassures him it was just a simulation. He blames Aida for going along with who he was in the Framework and for encouraging him. She tells him that the only changes she made to Fitz’s life were giving him his relationship with his father back and introducing herself to him. She is finally free to make her own choices and she chooses Fitz. Fitz tries to tell Aida that she fell for his father’s son but that isn’t who he is here. Aida tries to make it up to Fitz and he says she can start by saving his friends and she teleports to go confront Anton.

Coulson and May take on some more Robo-Antons but it all seems too easy. That’s because the other Robo-Antons actually took off in a submarine and are blasting the oil rig with torpedoes. Aida tries to stop Anton but she no longer has control over him. He also reveals that his severed head is actually in control of all the bodies but that it is hidden somewhere. Coulson and May manage to escape thanks to the convenient timing of the Zephyr picking them up but unfortunately, they couldn’t go back for Mack just as the building explodes. All seems hopeless until Aida teleports Fitz and Mack’s unconscious body onto the jet but the two former heads of Hydra are quickly subdued as Jemma knocks them both out.

Now that the gang is back together, they return to S.H.I.E.L.D. headquarters, which lies in rubble since the robo-agents blew it up. Aida and Fitz are locked up in the Inhuman containment cell due to Aida’s teleportation ability and Jemma is watching them on the cameras like a creep. My father enjoys watching the show and he was telling me he couldn’t stand Jemma anymore. I personally think Elizabeth Henstridge has had some phenomenal scenes this season but I do understand that her character is blind by love right now and that doesn’t make her entirely compelling. It’s just too much insecurity for me. Aida is hoping the agents will forgive her for everything and she really does want to be good. Everything she did was just so that she didn’t have to be a robot anymore, which is totally fair.

Fitz is more worried that the agents will never forgive him. He even compares himself to Ward but Aida tells him how much she loves him and how she always wanted what he and Jemma had. Unfortunately for her, Fitz tells Aida that he only has room in his heart for Jemma and this does not go over smoothly. In fact, this is the point where that “building to the finale” thing I was talking about earlier finally kicks in. Aida. Freaks. Out.

Getting to experience emotions for the first time can’t be easy especially if you have to deal with heartbreak and rejection. Jemma runs to get help but is held up at gunpoint by General Talbot and his soldiers, who believe the agents are still robots and responsible for the death of Director Mace. Aida is trying to force Fitz to build a life together and she tries to teleport out but realizes she can’t which only makes her angrier. One of the nameless agents rescues Fitz but he tells them that none of them are safe and that teleportation isn’t her only power and then she shoots lightning out of her hands! She breaks out of the cell and starts teleporting everywhere and killing everyone meanwhile Coulson is telling Talbot everything that happened. The agents manage to shoot Aida, but it turns out she has powers that heal her so she is back to being pretty much unstoppable. The agents fly away with Talbot’s permission and in the chaos and confusion of everything they realize they don’t know where Yo Yo is and they find her plugged into the Framework in an attempt to get Mack back. She wakes up screaming, strapped to a chair in a lab as fighting can be heard on the outside which can’t be good.

Aida is back with Anton and is not taking the break up well. Her and Anton come up with a plan to use the Darkhold to make the world the way it was in the Framework with the Inhumans being hunted and Aida in control again. There is some very aggressive foreplay between the two and just before it looks like they are going to have sex, Aida savagely kills the Robo Anton. I still thought it was pretty hot all things considered. Lastly, the episode wouldn’t be complete without one big scene before the finale. As Talbot and his soldiers check out the ruins of S.H.I.E.L.D., a familiar portal opens up and out pops our old friend Ghost Rider! Chain and all! What’s he doing back? Is he going to take on the overpowered Aida and over-Russian-ed Anton? Will Fitz stop being sad? Will Yo Yo find Mack? Find out next week in the season four finale, True Believers! 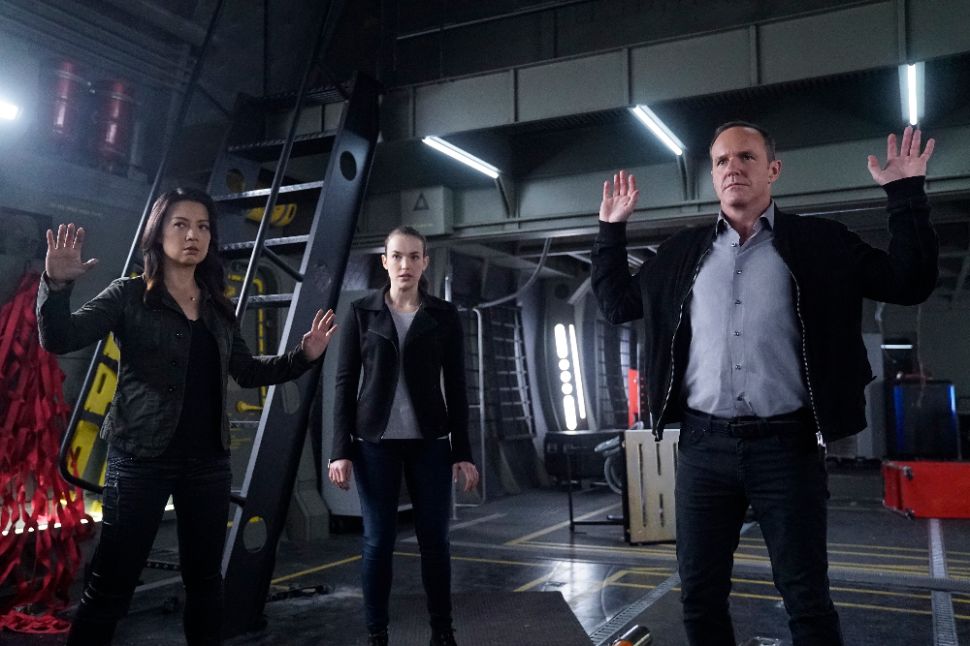