MacArthur was the architect of several amendments that got the American Health Care Act through the House last week — and it has made the second-term congressman a lightning rod for criticism from the left. Democrats have made MacArthur’s swing district covering parts of Burlington and Ocean counties a target for the 2018 midterm elections.

The AHCA, which is now before the U.S. Senate, would make nearly $880 billion in cuts to Medicaid through 2026, according to the Congressional Budget Office, and it would loosen an Obamacare provision to let some states allow insurers to charge more for coverage for pre-existing conditions.

Geoff Ginter of Pine Beach, a certified medical assistant whose wife and children all suffer from chronic illnesses, said that his family would not be able to afford the care they need if the AHCA becomes law. Bill language allowing governors to determine whether to continue a Medicaid expansion under Obamacare would inevitably lead to losses of coverage, he said. Gov. Chris Christie and all the major candidates running to succeed him this year, however, are unlikely to end the Medicaid expansion.

Others told of friends who had died because of their illnesses and said they feared for the longevity of low-earning patients who rely on Medicaid. Jameson Smith, a newly uninsured 26-year-old from Medford who suffers from a chronic neurodegenerative disease, said the toll could be great on New Jersey.

“In my town, besides me, there were five other families who had the same illness as I do. Kids. Now, I believe there is only two left,” Smith said. “One of them was my best friend and someone I knew all throughout high school. And someone who was like a sister to me.”

MacArthur has called the frequent protests outside his offices since the bill passed a product of special interest spending and non-constituents putting their thumbs on the scale. Ginter said he was a MacArthur constituent.

“It will not be the 3rd congressional district alone. We’re the only ones who can do anything about him, but he owes everyone an explanation,” Ginter said. “The law that he is proposing, that he signed up for, that he helped craft, that he voted for, will affect every living thing in this country.”

MacArthur has defended the amendments and the overall health care legislation, saying that under Obamacare, premiums have been skyrocketing and insurers have been pulling out of federal health care exchanges set up by the same law. 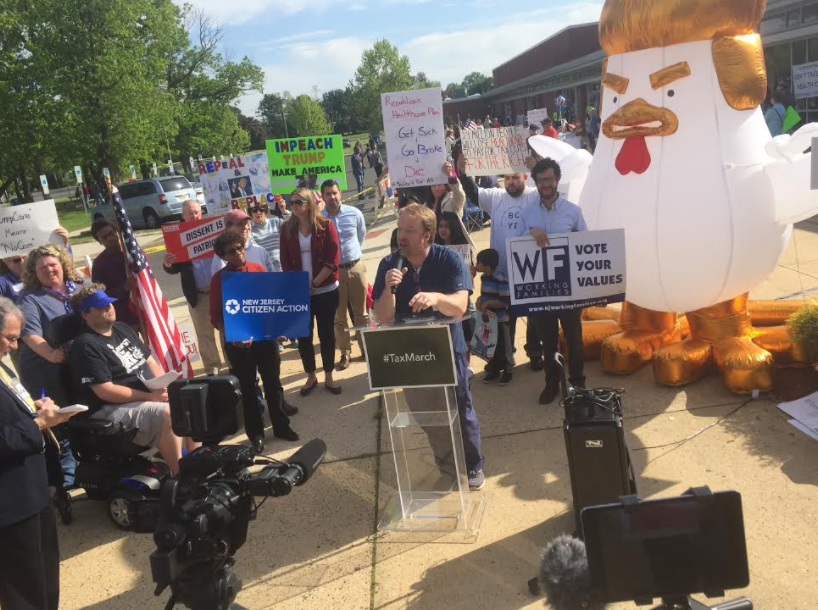