Like virginity, we can never re-experience Ridley Scott’s Alien (1979) for the first time.  The series, which remains in Scott’s capable hands with the latest elegant man-versus-monster-in-space iteration Alien: Covenant, has lost the shock and awe of the new. Like Prometheus and Aliens, these sequels and prequels struggle to keep the audience aroused and remain relevant.

Gone forever is the messy visceral rush—wtf is that thing?—the desperate bonding with crew members as one by one the creature picks them off without even the benefit of a good Chianti, occasionally exploding infant-like from their chests. As the tagline goes, “in space no one can hear you scream,” but that initial thrill, the quake of corporeal horror, is now long past, which sets the bar higher for each succeeding ‘episode,’ including the latest. Alien: Covenant begins where Prometheus ended, picking up Michael Fassbender’s synthetic castaway, David, on an uncharted planet during a doomed daytrip for the colony ship Covenant and its crew of testy, tasty couples including Billy Crudup, Katherine Waterston, Danny McBride and Demian Bichir. Barbarity ensues.

Starting with its serene, streamlined prolog, which records the “birth” of the sophisticated android David by his human inventor Peter Weyland (Guy Pearce in a cameo), the movie tinkers and toys with the origins of both species: human and alien. It explores man’s relationship with his Creator while supplying an answer for the genesis of those peculiar evolving and ravenous space beasties that emerge from human nightmares fully formed with teeth, gums and gooey saliva. Shout out to Mary Shelley, the quest echoes her man-and-monster story: Is Dr. Frankenstein a villain before he makes his being, or does making the being transform him into a fiend? Of Gods and men, who is the creator? Yeah. Yeah. Yeah.

Peel away the big budget genre film’s veneer of Western Civ citations—embodied by references to artist and inventor Michelangelo, composer Richard Wagner and the romantic poets Lord Byron and Percy Bysshe Shelley, among others—and what you have is rather conventional Lego blocks of sci-fi horror. The chunkiest example is the evil twin trope, which pits the David of Prometheus, against the Covenant’s resident android, Walter (Fassbender again). Just ask good Data and bad Lore of Star Trek: the Next Generation, sibling rivalry among synthetics in space is intense and collateral damage is high. See the twin – know the plot-twist.

And, like parents who have had so many children, and lost so many, we can’t be faulted for failing to latch onto the major characters. They are, and must be, beast fodder – Crudup’s tortured teary-eyed captain, Waterston’s pixie-daughter-of-Sigourney-Weaver’s-Ripley in her muscle shirts or McBride’s straw-hat wearing, swearing cowboy. They’re shades of shades of past sci-fi heroes that have gone before, hardly differentiated. Perhaps one element to blame that didn’t exist in 1979 when Alien broke out is that the character development offered by long-form TV (think the various Star Trek series, or Babylon 5, or The Expanse) has eclipsed the ensemble sci-fi film. We crave more depth from characters and binge-worthy story arcs. These mortals are crude shapes, God’s practice models on his way to making something closer to his divine image.

And, of course, the crew does all the wrong things as the audience sits helplessly, knowing it won’t end well – because this isn’t our first rodeo. The Covenant crew decides to detour to a planet that mysteriously shows up bleeping a help signal embellished with John Denver’s “Rocky Mountain High.” That should be enough of a hint to steer clear! Crewmates have the best sex in the universe in a ship shower while an unidentified life form roams the decks. Hint: that’s not soap on a rope. They freak the fuck out, aim wildly and shoot off their super-soaker machine guns inside, torching the shuttle just when they should be cool under pressure. The captain follows the untrustworthy android into a cavern and…you get the idea: So many mistakes, so little future.

Which is to say that Alien: Covenant supplies no more answers than Mary Shelley did – and, coming after her, a bit less. Man is not God. The creatures we attempt to create are abominations. Destruction is in the DNA of creation. Our answers are not nearly as interesting as our questions. And, sooner or later, if villagers don’t show up with pitchforks, we will be sliced and spliced into oblivion leaving a tabula rasa for the next crew aiming wildly at space without the compass of an earlier film to guide them. 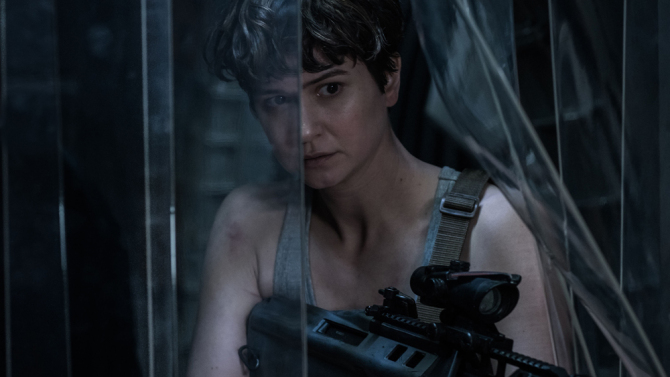