In last night’s bloody, bonkers American Gods premiere a war began a-brewin’, an epic clash between the Old Gods (think Odin, or Zeus, or that bearded fella’ from the Bible) and the New Gods (think iPhones, or Nintendo Switches, or UberEATS). Most memorable of the Old Gods, to say the least, is Bilquis, played by actress Yetide Badaki, an ancient love goddess who lures a lonely man into her motel-room-of-worship and eats him with her vagina, as love goddesses tend to do.

We spoke with Ms. Badaki to discuss the unique pressures–and pleasures–that come with stepping into Bilquis’ godly shoes.

American Gods is genuinely an insane show. How was the idea of it pitched to you?

Everyone here knows I’m a big geek. Huge geek. My first crush was Captain Picard. So I had always been a fan of Neil Gaiman, and by the time [the original American Gods novel] came out in 2001 I ran right out and got it, and loved it, obviously. It never occurred to me at the time, never even a thought that one day I’d get to play in that sandbox. But fast forward 15 years or so and there comes the audition, and it says, “Neil Gaiman, American Gods.” Uh, yes. Yes, please. “[Co-creators] Bryan Fuller and Michael Green?” Yes, extra yes. So as far as pitching, no one had to pitch anything to me. It was more of a “please, please, please take me.”

Did you have any discussions with Neil himself about bringing Bilquis to screen?

Well, having a conversation with Neil is kind of difficult. And that’s all on me [laughs]. Even the first time I met him I was like “Oh, gosh, he thinks I’m such a weirdo.” Because I shook his hand and then just scurried away immediately because I couldn’t talk to him. Even yesterday we were doing something at the Apple Store and he was saying how excited he was about where Bilquis is going and all that, and I basically squealed. Those are my quote unquote “conversations” with Neil Gaiman

In the book, Bilquis doesn’t have much of an arc, but she has a much larger presence in the show. Does that give you room to bring a lot of your own twist to the character?

Well, you take the material, you learn it inside and out, and then you can only start from where you are. Invariably, a part of you will come to it. One of the cool things about TV is that because of the development time there comes this interesting space where yourself and character, or, at least where you’re coming from with the character, starts to meld together as one. In that way, it is a conversation where what you are given meets where you are coming from. Then it’s this beautiful meeting in the middle.

Besides Mr. Wednesday [Ian McShane], Bilquis is the first god we actually meet in the show. I guess my question is just…how does one approach playing a god?

What was interesting is that these gods give the perfect vessel to express these really large wants and needs that are very human. My in to Bilquis was the idea of connection and trying to find connection in the present day. Intimacy is something that, I mean, New York Times articles have talked about how we’re starting to lack intimacy quite a bit. Even the sides for the audition immediately resonated for me, Yetide, hearing these words and connecting with that idea of trying to find that intimacy in everyday life. There are two things to remember about these gods. One, they are created by human beings, so they are a product of humanity. And two, especially the Old Gods, they’re still trying to exist in everyday life. So it’s funny, because [Emily Browning, who plays Laura Moon] and I were doing a lot of press together, and we were constantly shocked about how many parallels there are between the dead girl and the love goddess. They’re both struggling to survive and searching for something lost. It’s called American Gods but there are some very human journeys.

A lot of those articles you mention are about a lack of connection because of the rise of technology, which is basically the entire idea of this show. It’s Bilquis vs. Tinder.

It’s a discussion we’ve been having a lot of. Playing an Old God, I am biased because the first distinction that came to mind between the Old Gods and the New was, with the Old Gods, you came into it with a contract. You knew that you were making a deal. “I give you this, you give me this.” So it’s a relationship, it’s symbiotic. The New Gods, they are having devotion sent their way, they’re being lavished with all this attention almost insidiously. So I’d also ask on top of that, well, what are people getting back? The relationship with the Old and New Gods, we live off of worship, all of us, we want attention. We seem to believe we can’t share it, so yes that definitely causes quite a bit of friction. However, the Old Gods, they’re Old Gods for a reason. They’re survivors.

You mentioned you were a fan of the book, and you’re also in what is by far one of the most famous American Gods scenes. As soon as the show was announced people were like, “well they’re not gonna do that.”

All of us, in this process, we’re all fans. Bryan and Michael talk about all time how they’re really writing fan-fiction whenever they create new information. And then, down to set design, hair, makeup, everyone is passionate and wants to make this the best they can. So walking on to set, you can feel it from everybody. We want to do it right because we do want to give to the fans, and to Neil, this full experience. But then there’s that moment where you can’t think about that. It just becomes about telling the story. It becomes purely about the moment. Maybe we were blessed by Bilquis [laughs], because yes, there were a couple takes where it felt like I was still trying to figure things out. “Wait, I have to do what?” And there’s the technical aspect, where you have to choreograph it. It’s highly choreographed. You have trap doors, a lot going on. But that technical part actually helped take off pressure, because then you could geek out. Well, I did. Even when my stand-in was there, I got to see on the screens, there were three screens; one that had both of them regular size, one with both of them large size, and then one with just large Bilquis, and I just geeked out so hard over a that. It all came together, a lot of people working very hard with the incredible [episode director] David Slade, and then the effects, in the end, are wild. I was there, on set, but I still watch it and go “wow, okay, that’s kind of cool.” 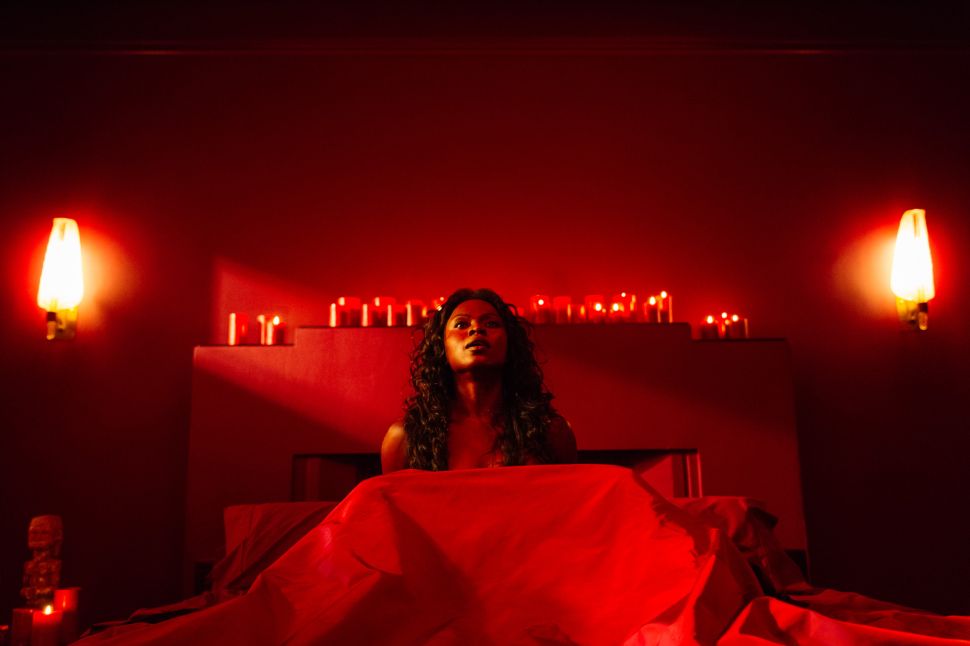