Vinnie: As the founder, president and sole member of the “LOST was actually great the whole time fuck all of you” fan club (LWAGTWTFAOYFC for short) I’m not opposed to a good old fashioned flashback. But I’m not sure I like whenever a show devotes an entire episode to it, leaving the main story by the wayside. I didn’t enjoy when Luke Cage did it just for a two-second shoutout to the character’s admittedly dope comic book tiara, and I didn’t entirely love that American Gods did it just to show us that Laura Moon did, in fact, die while giving Dane Cook a Dusty Crophopper. But hey, I can’t complain…tonight is just a night for dead Lauras, I guess.

Like, if they ever want to remake Ocean’s 11 for TV and have it be just about those two pulling short, medium and venti cons, I’d legit purchase Starz for that. I miss using the term “long con” Vinnie. Long cons definitely fell under the skills & abilities LinkedIn subsection for Sawyer on Lost, and then like, no one else as charmingly for the rest of history.

Vinnie: So this episode is titled “Git Gone,” a reference to the most unpleasant suicide attempt humanly possible—hot-tub-assisted death by bugspray. It turns out, Laura’s life pre-Shadow was pretty shitty (her life post-Shadow is also pretty shitty, but for different reasons). She lives alone, works a dead-end job behind a casino blackjack table and, to top it all off, a robot just took the pure pleasure of shuffling cards away from her. 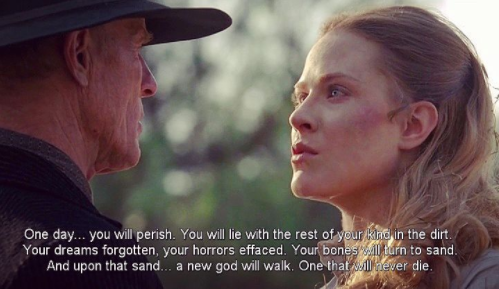 I also want to nit-pick about how, of the two American Gods we’ve seen so far, BOTH are essentially the same God. Like the difference between the turf of “Technology Boy” and “Media Loves Lucy” must get extremely tough to parse. I feel like you could create some giant rifts in Team New Gods by just lobbing one of those social “Oh I don’t own a TV; I watch shows on my computer” bombshells and completely cripple their whole (still really undefined) agenda.

Vinnie: One of the cooler aspects of “Git Gone” was how differently Ricky Whittle plays Shadow with and without Laura in his life. In present day, he’s a massive walking sad-sack, just like “fuck my brain up with that hammer fam IDGAF.” But here, dude is hot shit, even if he is truly terrible at robbing casinos in a discreet manner. It tooks an inhuman amount of charisma to pull off a line like “then take me the fuck home.” If I said that, the woman would instead “take me the fuck to the police station” or “take me the fuck to getting pepper sprayed in the face.”

Drew: Well Vinnie, you had your chance to learn close-up magic that time we all went to Jekyll and Hyde’s. But no, you just had to goad our host into messing up his banter while trying to pocket your phone.

Vinnie: I should also mention that Emily Browning is very good here, even if Laura Moon is getting firmly positioned in the Skyler White role (wait, on Breaking Bad, was meth a god??).

Drew: I mean, right? Is the constitution an American God? Is “David Chang and Aziz Ansari’s contribution to modern foodie culture” a God, or just two patron saints who love to snack. Is “peak tv” its own god and there’s a sub-god that has to be the high deity of Chuck Lorre originals?

Sorry, yes, meth is a god. But again, falling under the realm of Technology Boy, who smoked those synthetic toad skins. Maryjane? She’s probably the oldest god besides “Tinder Date From Hell,” Bilquis.

Vinnie: I loved her matter-of-fact delivery in telling Shadow she’s straight up bored with her life. “I resent not being happy. Not resent you, just…resent” is such an A+ way of describing life in general.

So anyway, Laura’s all like “Shadow, rob the casino with me. You won’t get caught.” Then life is all like:

Drew: See, I’m not really getting the Skylar White vibe from Laura. She’s not a nag, she’s not the scold, she’s not the fool in the relationship. Laura Moon, as we found out when she showed up at the hotel last week, will always be the one who knocks.

If there’s any equivalent, I would put her in this category I’ve seen more and more of in Noah Hawley’s programs: Laura is the Wild Card. She’s Peggy Blumquist. She’s Simone Gerhardt. She’s Nikki Swango. She’s Lenny Busker with Coachella hair. Laura may look like a literal angel, but she’s the dark half of the manic pixie dream girl: the desperate, manic dreamer chick. Or for another TV metaphor: She’s the Jimmy McGill of the two of them; with Shadow as the loyal, slightly beleaguered Kim Wexler.

Now that being said, I do appreciate the show isn’t trying to do a cute escape around the thorny moral issues of Laura’s fidelity. It was like “Oh Puppy, this was all some big misunderstanding!” Or, “Oh, it was only that one time, and my mouth just kind of fell on the penis of the Valtrex God.” No, Laura Moon is one gone-ass girl.

Vinnie: Man, they really went all in on making Laura’s unfaithfulness while Shadow’s in prison as repellent as possible, huh? I mean, we already knew how Bryan Fuller wanted us to feel about this when he cast DANE [deep, disgusted sigh] COOK as Robbie, but Laura’s also ignoring calls from prison, fucking underneath “Welcome Home” signs, telling Shadow she loves him two feet away from Robbie’s bare ass. Making Robbie repeat “you’re waiting for Shadow” before inviting him in was a wonderfully twisted, dead-eyed touch that made me vastly uncomfortable, as intended.

Drew: Look, she’s probably going to be described in a bunch of recaps this week as some embodiment of the  (deeper sigh) “unlikable/unrelatable/difficult” female character trend on TV. But she’s doing a great portrayal of someone who was so unhappy in her life that she became numb to it. But it tracks with her character, who even in death is so over it with that Jackal God I swear to christ I flashbacked to that scene where Bojack meets Vincent Adultman.

Vinnie: But yeah, let’s talk about the car crash. THAT car crash, the one that possibly ruined “The Weight” forever. I thought it was both deeply hilarious and deeply depressing that Robbie went the “let’s BOTH leave our spouses” route, because of course he did. You don’t catch feelings in an affair with the wife of a man-mountain who just spent the last 3 years doing pushups in jail and literally nothing else.

Drew: Oh no! Okay, I can fix this issue…whenever “The Weight” is used inappropriately, you can recalibrate your enjoyment of it by watching that final montage in Igby Goes Down on a loop for 12 hours.

Also, I hate ALL depictions of car crash scenes because they’re essentially the cheap jump scare available to narratives outside the horror genre. Like oh my god, those two seconds from Adaptation are single-handedly responsible for me flunking my driver’s test three times. And on TV, it’s even more egregious: from Grey’s Anatomy to The O.C., when hasn’t vehicular manslaughter been used to reach that critical melodrama junky demo?

But I dunno, the Robbie/Laura crash was so over the top that I actually started laughing. It was either a defense mechanism or its similarity to Victor’s van scene in Wet Hot American Summer.

Vinnie: I thought this episode vastly improved once Laura and Robbie died, because if you must do a flashback at least make it a weird-as-balls flashback. For example: Laura having none of Anubis’ heart-weighing mystical mumbo-jumbo because oh my God, death, stop taking yourself so seriously. Although I did love when he was like “for being a shitty person you get eternal darkness” and Laura’s like “also peace?” and Anubis is like “lady I said darkness peace costs extra.”

Drew: Yeah, Anubis is all like “In life you believed in nothing, so you’ll go to nothing.” And Laura’s all, “I have no mouth but I must yawn.” 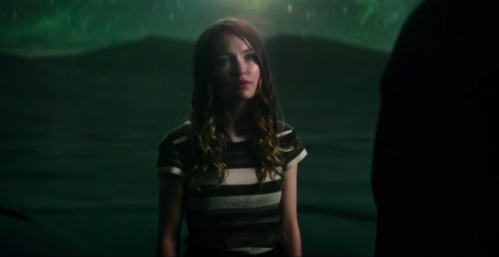 That’s what we in showbiz call a dead room, Vinnie!

Vinnie: This might not have been my favorite American Gods episode, but low key the scene in the bathroom between recently-revived Laura and Audrey (ANOTHER Twin Peaks name) might have been my favorite of the show so far. There’s just so many absurd, small touches—the fact Laura only has one arm, the fact Laura is just shitting embalming fluid, the words “Get out of my house, you zombie whore” just, like, as a phrase—but also because Betty Gilpin kills every scene she’s in as Audrey. “”Anger and grief have really just made me vulgar,” she says, referring to having her husband buried with his own severed penis inside his asshole. Honestly, props to both actresses here, but especially because of this exchange:

Audrey: “Yeah, he knows. I tried to fuck him…on your grave. It seemed only fair.”

Laura: “That does seem fair.”

Drew: Today is really the day for referencing, because I’m going to throw another at you: that moment felt a lot like those awkward “I just came back from the dead to find you fucking my husband” moments in the Australian mystery, Glitch. (Currently streaming on Netflix.) The idea of social niceties and norms still applying post-death.

Also, major shoutout to the return of Audrey in the plotline. She’s far and away the coolest fucking character on the show, despite her introduction, which was screaming “I AM TRYING TO GET MY DIGNITY BACK HERE!” after pissing on her dead, cheating husband Dane Cook’s grave. “Dignity” seems like it was a couple exits back.

Vinnie: After discovering she got a shitty obituary for a shitty life, Laura runs into Anubis again (in adorable dog form!) and his buddy/funeral home partner Mr. Ibis. Who, like I said last week, I’m 99.9 percent sure is the person writing those “Coming to America” entries. So that will be important…eventually!….maybe!

Drew: Yup, a WHOLE EPISODE of a show called American Gods which featured approximately 1) (one) God); 2) (one) the Egyptian mythology equivalent of some sort of James Watson or Sancho Piazza to the Gods guy and 3) (one) “dead zombie bitch.”

I hate to say it, but I kind of feel like in retrospect, they should have given this project to Ryan Murphy instead of Fuller. At least that guy knows how to shove approximately ten million concepts and actors into one week’s worth of camp programming.

Vinnie: And, that’s it, really. We end at the same place we were last week—Laura, who sees Shadow as a big old ball of sunlight now, surprises him in his hotel room with a “hello, Puppy,” a nickname that seems way less endearing now.

Drew: Ooh, fingers crossed that choad will be played by Tom Cruise circa Magnolia. 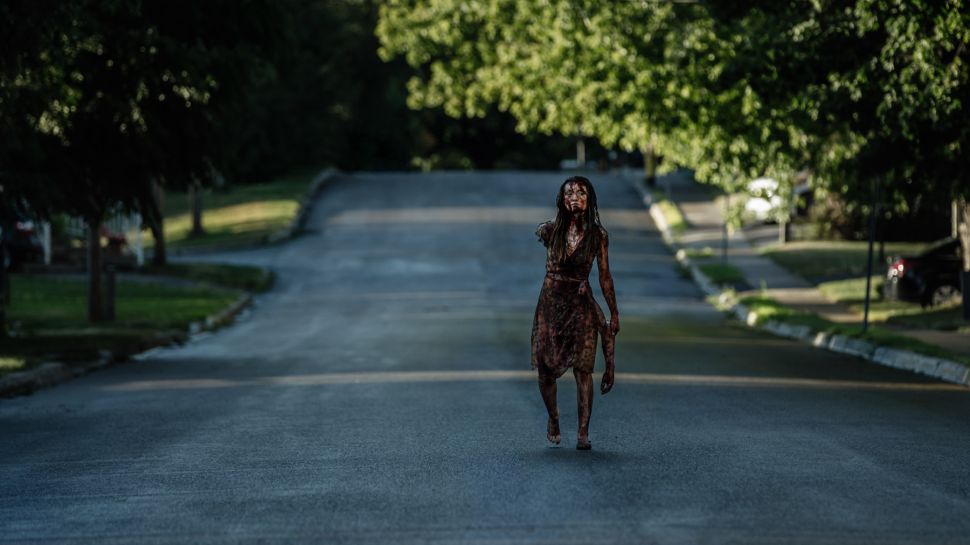