Drew: We open, as we did in the pilot, with an origin story: how the African god Anansi boarded a slave ship in the form of a spider and then turned into Orlando Jones giving what is arguably the worst performance in the show thus far. (Vinnie, take it away!)

Consider my mind completely, utterly boggled–boggled I say!–by the idea anyone could have not enjoyed Orlando Jones’ debut on American Gods. In fact, I’d go as far as to say it was one of the most dynamic character introductions since Oberyn Martell climbed out from under a literal pile of prostitutes just to let Tyrion Lannister know he intended to snake-fuck his entire family to death.

Now, tonally, the situation here is…the exact diametric opposite, but the impact is the same. Jones makes you pay attention right from the jump. “Angry gets shit done” as advice is the perfectly godly mix of so strong it might as well be written in the sky daily for the remainder of 2017 and just meaningless enough to convince an entire ship of soon-to-be-slaves to burn themselves alive so a spider-god has enough faith-protein to make it to US soil.

Drew: I mean, he was just hacky. What purpose does showing up like a 70s jive cat serve for an audience of slave ship members? Is it just for us, the audience, that Jones gives this whole speech about what’s waiting for these once-free men when they reach the other shore? Cuz it kinda feels that way, and then it just…stopped working for me. On several levels.

Vinnie: Hacky? In Starz Presents American Gods, the problem is hackiness? On a show that opened on Vikings bro-murdering each other on the beach, where Ian McShane is doing his best impression of an escaped nursing home patient who recently discovered the joys of cocaine, in the same episode where Cloris Leachman more or less reprises her role from Beerfest, in the same episode where Peter Stormare literally hacks his way through roughly three dozen cartons of cigarettes…Orlando Jones wearing a non-period appropriate checkered suit is where you drew the hacky line? That’s like watching Riverdale and singling out one particular high-schooler as “too sexy.” They’re all sexy, Drew! It’s the sexy high-schooler show! You know what you signed up for!

Drew: How did Anansi know the future? Do gods know the future of their subjects? Is that relevant information? I mean, Vinnie, I’m trying here, but I kinda feel like Charlie Kelly here:

WHAT ARE THE RULES?

Vinnie: I think the most important thing to remember about the Anansi scene is that he does not actually give a shit about these men aboard the slave ships. It’s why Bilquis doesn’t get to know her partners on a more personal level before sucking them into the unending galactic paradise that is her vagina. They’re not interesting in teaching lessons, just that the listeners feel just enlightened enough to follow, whether it’s into a secret sex room or off the side of a slave ship.

As for the “rules,” well, we are talking about gods, Drew. Maybe it’s just my 12 years of Catholic school education talking; every day, repeatedly, someone in a robe or collar would say “these are the rules” and even at 13-years-old it was like, “uh, I’m seeing some inconsistencies here. Tell me again why masturbation is wrong but stoning is not?” And that was just one god! It turns out the most unreliable narrators are usually the omnipotent ones. Anansi can see the future because he’s been around long enough to see the linear timeline start to curve, but at the end of the very awful, death-by-fire day he’s just saying what needs to be said to get a few more bodies on to the pile. It’s what gods are good at.

That, free-style explorative jazz, and board games. Those are three main things.

Drew: I love that when Shadow shows up after having been lynched by the white man group of technology, Mr. Wednesday is super cas’ about it.  Mr. Wednesday is like “Oh, don’t worry, I’m steaming angry about you having every body in your bone broken and your muscles torn limb from limb. I mean, it makes me feel slightly nauseous when I think about the traumatic implications of you, a black man living in the south and having recently been let out jail, being LYNCHED in the graveyard over the body of your recently deceased, Caucasian wife. Because any attack on you is an attack on me!”

Vinnie: Yeah, the moment when the bug-eyed former con-man sees that a Sega Genesis come to life beat you half to death and tried to hang you from a tree and says “oh, boy, oh golly good thing I have a PLAN” is the moment you answer “okay let’s sit down and you can tell me that plan in great detail before I drive you across the country to pick up a hammer. Also what hammer? Also who the fuck are you?” Thank god(s) Bryan Fuller found an actor as charismatically blank as Ricky Whittle, or else I might just start to think Shadow Moon is a bit of a dumb-dumb.

Drew: Not gonna even mention that this is when Anansi should have shown up to sway Shadow away from working for “the man”…

Drew: …but instead we got something infinitely better: Gillian Anderson as Lucille Ball in I Love Lucy.

Vinnie: Oh man, would ANYONE be opposed if we held off on that supes ill-advised X-Files reboot 2.0 and just did a variety show where Gillian Anderson plays TV characters throughout history? David Duchovny can show up, too. I don’t care. He can play a Ricky Ricardo who’s way too obsessed with the idea Fred and Ethel are actually lizard people.

That’s basically what American Gods is doing with Gillian Anderson as Media, anyway, to be honest. Which is fantastic, as was this entire scene; probably even more so because Anderson isn’t even doing a Lucy impression, she’s just a smooth-talking TV god who happens to be wearing her Lucy costume in that particular Walmart. My one, small worry is that I wonder how often these “New Gods” are going to explain the premise of what a “New God” really means. “The screen is the altar, I’m the one they sacrifice to,” Media says, which…yeah, we saw the premiere. Every time Shadow goes to the bathroom I’m waiting for the toilet to be like “I’m also a god now because I eat people’s poop!”

Drew: Man, so much good stuff to get to in this episode that was so plot and exposition heavy that I somehow forgot on each subsequent viewing that the majority of this episode takes place in my Bubby’s apartment, eating schnitzel with a knock-off Thor/Loki dude who I’m like eighty percent sure is the Smoke Monster from Lost and twenty percent sure is a nihilist, dude. (Which brings up an interesting point: how can Czernobog be a god if “ve don’t believe in anyving, Lebowski?”

Vinnie: Peter Stormare is one of those dudes who is probably never going to win an Oscar, but I can kind of just listen to speak about nonsense for entire scenes at a time. Like, low-key (lol) my favorite part of these first two episodes is Czernobog tensely explaining how much more fun it used to be to kill cows. Him repeatedly demonstrating the “took-took-took” sound a slaughterhouse bolt-gun makes was an effective way of making this the second most uncomfortable Russian dinner-party I ever attended with Ian McShane. Although the first one also included someone yelling “no cow killing stories at the dinner table!”

Drew: Czernobog, to give you an idea of how washed-up this braining butcher truly is, has perhaps the saddest Wiki entry for any god, ever:

“(Czernobog is a) Slavic deity, whose name means black god, about whom much has been speculated but little can be said definitively. The only historical sources, which are Christian ones, interpret him as a dark, accursed god, but it is questionable how important or malicious he was really considered to be by ancient Slavs. The name is attested only among West Slavic tribes of the 12th century, hence it is speculated that he was not a very important or very old deity.”

Oh God, like how big of a bummer is that? You’re not even a BADASS bad god, you’re like a “minor inconvenience god.” No wonder why Shadow was about to get under skin about….murdering him?

Vinnie: It at least explains the bitter chuckle after he says, regarding checkers, “I shall play black.” I thought it was just a sweaty-old-racist remark at Shadow’s expense, but it’s just the literal interpretation of his name. Also, the fact that his own followers paint him as a god that can’t swing a hammer without ripping his pants makes it clear why he can’t even hit Ian McShane with a lamp.

Drew: I’m still confused what Shadow’s game plan is here, or why he’s constantly taking up these insane Faustian bargains with immortal beings, but hey, he’s probably really embracing his YOLO period. So when it’s time to play checkers with the stakes being “if Shadow wins, Czernobog has to join Mr. Wednesday’s…gang? Meetup.com board? Unclear, really!” But if Czernobog– a man who literally gets off on bashing in the brains of anything nearby with a hammer– wins, he get’s to do his FAVORITE ACTIVITY to Wednesday’s cueball smooth noggin.

Which…yo, buddy? Shadow? Don’t do that, buddy. This job isn’t worth losing your head over. You have no allegiance to this dude and his weirdo, ex-pat friends. I Love Lucy just offered you a job! Go get it, boy! Go get some of that monochrome trim! (Sorry, that was disgusting.) At this point, considering how “welcome” Wednesday is turning out to be, Shadow might have a better time as a free agent.

Vinnie: I actually think Shadow’s rationale is perfect, though, and 100 percent should be the rationale of every other TV character who suddenly finds themselves in batshit banana-land: “If all this is real, and TV’s talk and she can read fortunes and hammer’s bleed, if there’s a world under a world…fuck it.” I love that, love that Shadow Moon is basically a 6-foot-5 shruggy-shoulder. Dude just got out of jail to discover his wife died sucking Good Luck Chuck’s dick, fought a leprechaun, rode in a car with Windows 98 personified, and now can’t even go shopping without Lucile Ball offering to show him her tits. At what point does everything become fine, just fine, no matter what? Checkers for the right to bash my brains in. Whatever. Fuck it. I hope next week’s episode straight up opens on a game of Yahtzee to see who gets to push Shadow down a flight of stairs. 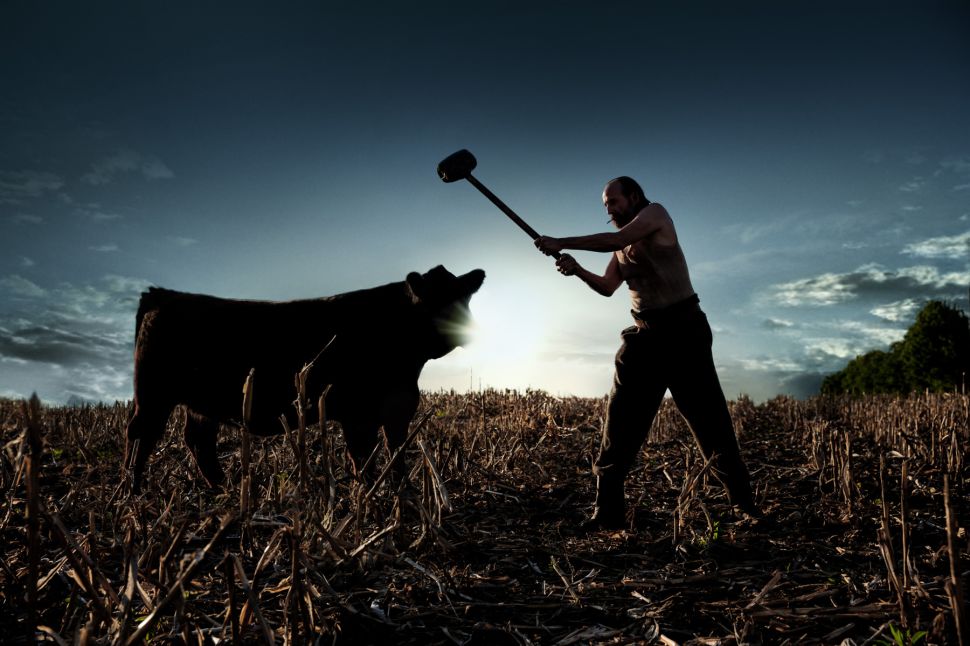