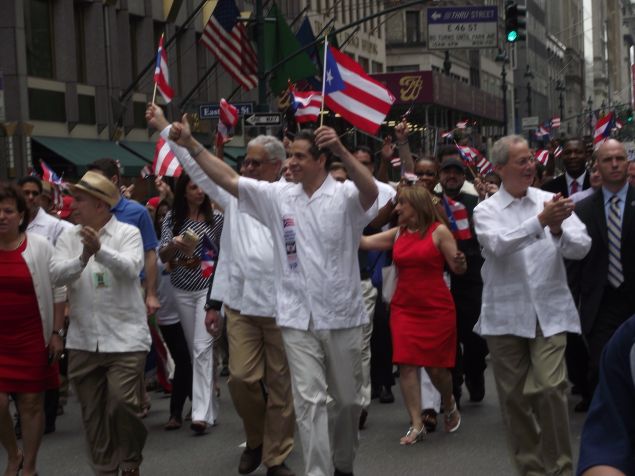 After revealing Friday evening that he would join the growing boycott of this year’s Puerto Rican Day Parade, Gov. Andrew Cuomo lashed out this afternoon at the event’s leadership for provoking the controversy by bestowing a first-ever honor upon nationalist Oscar López Rivera, who spent decades in prison for his involvement in a violent leftist sect.

Speaking after an unrelated event in Staten Island, the governor—considered a leading contender for the 2020 Democratic presidential nomination—attacked the decision to name the former leader in the Fuerzas Armadas de Liberación Nacional the ceremony’s first-ever “National Freedom Hero” at the June 11 cavalcade. The FALN claimed responsibility for a string of deadly bombings in the 1970s and early 1980s, including the blast that killed four people at the Wall Street-area Fraunces Tavern in 1975.

Many of the festivity’s financial backers have withdrawn support over the award, including AT & T, Goya Foods, the New York Yankees and Coca-Cola—and a number of politicians, like Cuomo, have announced they will not appear in the parade as usual.

“I think this political mess, which is what it is, has actually interfered with the purpose of the parade, which is to honor the Puerto Rican community, and honor our connections, and honor their culture,” said Cuomo, who stressed at length his “close association” with the city and state’s Puerto Ricans.

The governor even argued that the controversy over López Rivera’s participation in the event had distracted from the ongoing financial crisis on the island, as its municipalities have determined they cannot pay their bondholders. Efforts to manage the debt have involved slashing pension payments and social services, causing enormous social and economic stress for many of those living in the U.S. territory.

“Those are the issues we should be talking about. And this was just an unnecessary and counterproductive political mess,” Cuomo said.

López Rivera was never accused of detonating any of the lethal explosives, but was sentenced to 70 years in prison for seditious conspiracy, robbery, transportation of explosives and firearms and an attempt to escape federal prison. Former President Barack Obama commuted his prison term to end earlier this month.

López Rivera’s champions—like Council Speaker Melissa Mark-Viverito, who curries considerable influence with the parade’s leadership—view him as a political prisoner and freedom fighter. His critics, like NYPD Commissioner James O’Neill, consider him as the ringleader and bombmaker for an organization that killed and maimed numerous civilians and first responders.

Cuomo refused to say which stance he took when asked today.

The parade board did not immediately respond to requests for comment. Mayor Bill de Blasio, Cuomo’s foremost rival in the Democratic Party, has announced he will march in the procession as usual.