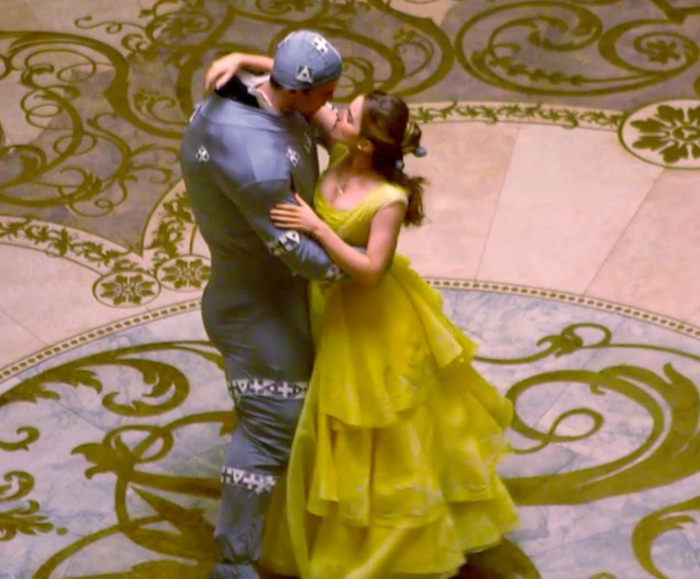 Since the live-action remake of Beauty and the Beast came to theaters last March, it’s been become beloved by fans worldwide, grossing over $1.2 billion and claiming the spot of the 10th highest-grossing film of all time, just behind Frozen and Harry Potter and the Deathly Hallows — Part 2.

But imagine how much more money it would have made if instead of turning Dan Stevens into a water buffalo-like beast, they had left him in stilts and a skin-tight gray motion capture suit with fake beefy thighs.

how did emma watson manage to keep a serious face the entire time pic.twitter.com/jL4jbJ1rMu

Look at that Michael Phelps little swim cap! And those Moon Boot-looking shoes.

Best thing ever! I now want to watch the whole movie with @thatdanstevens just in the ugly suit. Love this movie more and more daily. pic.twitter.com/oXKQgZ077b

Imagine this: An arrogant prince at the heart of French society and at the height of Rococo style. He throws a lavish ball, refusing entry to all but the most fashionable. When a starving beggar woman asks him for shelter from the cold, offering but a rose as payment, he looks at her rags and laughs. But she was no ordinary beggar woman; she cast off her rags and revealed her true form beneath, for the woman was a beautiful enchantress. The prince shielded his eyes from her radiance and bowed, begging her for forgiveness, but it was too late: she had seen into his heart, and saw a man shallow and selfish.

And so she cursed his form. His thighs would be bulky, his shoulders broad. He would be forced to walk the rest of his days on hilarious semi-circle bouncy shoes. His luscious blonde hair would be tucked away beneath a cap. And worst of all, his French fashion would be exchanged for a gray one-piece, a dull swatch of unflattering fabric that would make him look like a missing Teletubbie who suffered from chronic depression. Only if someone could learn to love him in that form would the curse be broken.

You vs. the guy Emma Watson told you not to worry about pic.twitter.com/eMvRy7NMf2

I would watch that movie one hundred times. I would petition to make the poster for that film to be the American flag. Please, Hollywood, next time you do an adaptation, do it right.