In November 2016, Irakli Rusadze’s main claim to fame was his sartorial interpretation of the white and red Georgian flag. He placed the simple cross design on a camisole with extended side flaps on the runway for his Situationist label and it instantly became an Instagram hit. In fact, when the Observer provided an overview of the fashion scene in Tbilisi following the show, that shirt was the opening image of the story.

Though that shirt was one of the best sellers from that collection (it sold in “quite big quantities,” Rusadze admitted), an event in January far overshadowed that runway moment. That’s because Bella Hadid wore the Situationist brand while dining with Kendall Jenner and Ricardo Tisci in Paris.

“Bella doesn’t wear the same clothes over again, but she wore our leather coat four times,” Rusadze proudly pointed out, through a translator. The designer, who is based in Georgia and produces his range in Istanbul, speaks very little English. But he invited the Observer to meet at one of Tbilisi’s coolest cafés, Lolita, to talk more about his approach to design. And of course his translator came along.

The Hadid sister discovered the Situationist website and asked her stylist Elizabeth Sulcer to request not one, but five separate pieces from the young designer. He happily obliged and she has clearly enjoyed her selection.

Though Rusadze founded Situationist in 2015, he has been creating clothing since the age of 13. He started off sketching, then cutting patterns and finally making complete pieces, which eventually led to the creation of his own label. As he explained, he wanted to be able to present his own vision and ideas, not that of others. The young designer insisted that it had nothing to do with the state of fashion in Georgia at the time. Though it’s not that coincidental that he started Situationist around the same time that Demna Gvasalia, who is indisputably the most famous Georgian fashion designer, was appointed to the top position at Balenciaga. However, Rusadze does credit his fellow creative for offering a leg up on the international front.

“When I used to encounter people and tell them I was from Georgia, they thought I was from the US. Now, the first thing that comes to mind is the birthplace of Demna. Georgia is it’s own place now,” he explained. As such, Rusadze has taken his collection around the world, presenting Situationist in Italy during Milan Fashion Week. The range was also presented in Prague and Shanghai.

But his native country still remains a major source of inspiration. “I grew up surrounded by Georgian women who faced difficulties of post-Soviet reality. So the concept of femininity for me is connected to inner strength,” he explained of the armor-like jackets, Matrix style leather trench coats and sexy-but-strong suiting separates.

“My clothes aren’t about the shape of the body; it’s about the personality that I would like to show.” As such, alongside another cameo of that aforementioned flag top, Rusadze included a t-shirt emblazoned with the iconic Mother Georgia statue in his latest collection. The statue represents Georgian culture, with a glass of wine to offer to guests in one hand and a sword in the other, to fight those who are seen as enemies.

This season, Situationist wasn’t his only focus; it also marked Rusadze’s first fashion show for his menswear brand, Aznauri. He detailed that all of his designs, for both men and women, are made for people who are creative hard workers; these pieces won’t get in the way of that labor. And Rusadze offered proof of that, by showing the leather button down shirts, slim maroon suits and stylized track pants on two teams of male models who were engaged in a heated game of soccer. The models were falling, sliding, sprinting and lunging in the Aznauri pieces without issue, nary a seam broke or thread came unraveled. The interactive fashion presentation, held in the courtyard of the Marriott Hotel, wasn’t only fun for the viewers, but it provided an close look at the high quality that this designer holds himself to.

Though his Situationist brand has been growing massively since it was founded (it can now be purchased in three countries), Rusadze has no plans to go commercial.

“In the future, I don’t see Situationist as a huge mass market brand; it’s still niche for people who understand the main idea of what I create,” he explained. Though he surely wouldn’t deny some more celebrity brands wearing his thoughtful creations. 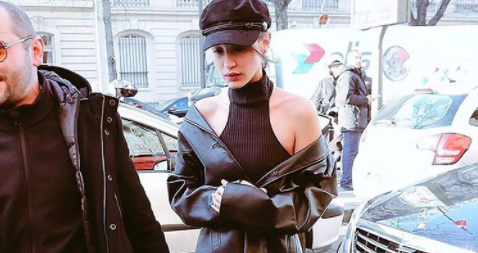