Everyone loves a good vacation Instagram, whether it’s a snap of a cloudless tropical beach, a museum selfie, a #nofilter sunset or pretty much anything that shows your social media followers that you are definitely not in the office.

Upon returning to every day life, where the world is just not as Instagrammable as that glass of rosé in front of the Caribbean Sea, it’s tempting to post the #latergram; a photo of a time in the not-so-distant past when life was simply more photo op-worthy. So the next time you’re scrolling through your stockpile of old vacation photos, looking for the perfect #tbt, don’t feel too bad—even Bella Hadid isn’t immune to the siren song of the latergram.

Sure, a quick perusal through Hadid’s Instagram feed might make you think the model is on perma vacation—there she is  in Mexico with pals, or on a boat in Dubai (where she also went skydiving) and frolicking around Jamaica in bikini.

Not to mention, her recent jaunt to a mysterious tropical getaway, where she posed with Kendall Jenner, Hailey Baldwin, a yacht and a jet ski. Even the photos in her home base of New York are glamorous, whether she’s walking the Met Gala red carpet in an Alexander Wang bodysuit or strutting around in a #streetstyle ensemble.

@alexanderwangny giving it❤️thank you for being my super date ❤️👑💋

Alas, the jet setting model would like you to know that she, too, often posts photos from vacations past. “It’s crazy because it looks like I have a lot of down time and a lot of vacations. Especially when people look at my pictures online,” Hadid told Compelo. “But the thing is that I don’t post every day when I’m working but I will post old pictures from previous trips and things which makes it look like I’m on vacation a lot of the time, when actually I’m at work.”

When work involves going from one Fashion Week to the next, walking the Victoria’s Secret runway, magazine photoshoots and traveling for her role as the face of Dior Makeup, often by way of private plane, it may be easy to confuse her work trips with lavish vacations.

“When I’m really intense I will honestly work for four months straight and then I’ll have one weekend off and then I’ll go straight back to work. People think that in between I have so much time off but I only ever take two days off every two weeks, at the maximum,” she continued. Rough.

Considering the model arrived in Cannes a few days ago, surely she won’t need to recycle any old Instagram material for a while—especially seeing as she has already decided to post #latergrams from her trip to the Film Festival last year.

One of my favorite moments..a year ago 😇😇 Let's go again 👅❤️ ✈️Cannes 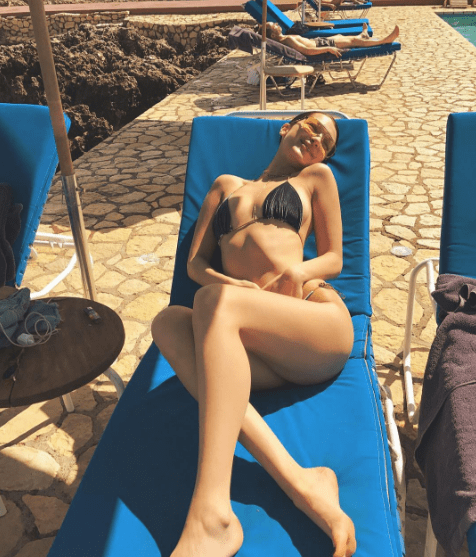