In a memo dated April 27 that was made public today, DeVos forbade department officials from mandating page length or formatting rules in grant applications.

This new development comes following an outcry in educational circles over the Department of Education denying Upward Bound grant applications from dozens of schools because of improper formatting. The “errors” in these applications included lack of double spacing, improper margin length and use of the wrong font.

Forty-four schools were affected, including Columbia University, Fordham University, Loyola University of Chicago and New Jersey Institute of Technology (NJIT). They lost out on about $10.3 million in funding altogether.

While the new federal policy is effective immediately for any new grants, many of the affected schools want DeVos to give their requests which were denied for grammatical reasons a second chance.

“We hope that, in the interests of the many students for whom Upward Bound provides a critical foundation for educational success, our application will be reconsidered and this funding will be restored,” NJIT said in a statement emailed to the Observer.

These schools also have Congress on their side—last week, 32 members of the House of Representatives co-signed a letter urging DeVos to hold back $20 million in funding for applications initially rejected over formatting mistakes.

“Abject refusal to consider applications with minor errors rather than providing an opportunity for remedy or subtracting a small number of points for such non-substantive mistakes suggests that the Department’s priorities are misaligned with its mission,” the letter reads.

Education advocates agree: In a statement to the Observer, the Council for Opportunity in Education (COE) said that the new grant process would not truly be fair unless the affected applications were reconsidered.

“To reject them on these grounds puts form over substance and overlooks the opportunities that Upward Bound has provided for young people in these communities for many years,” said Kimberly Jones, COE vice president of public policy and communications. “This is particularly important for those applicants that serve very isolated, rural communities where few—if any—options for pre-college support exist.” 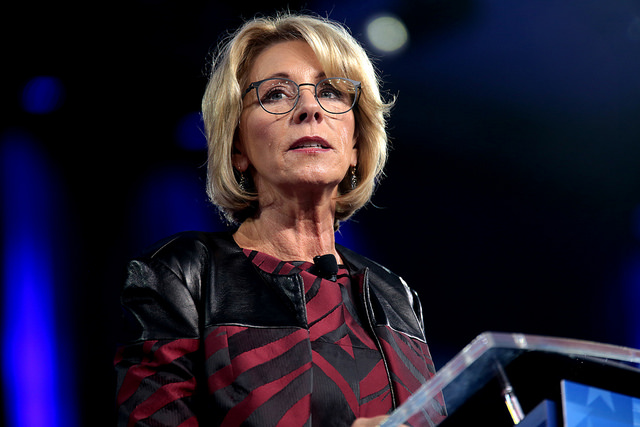