If there’s a defining image for “Expenses,” this week’s episode of Better Call Saul, it’s of a mentally, emotionally, physically, and financially exhausted Jimmy McGill, disheartened by the failure of his latest scheme, just sitting there alone on the sidewalk, collecting himself. Everyone needs a breather now and then, including this show.

The slow pace obscures it somewhat, but season three of BCS has seen a whole lot of excitement go down from the return of Gus Fring and other figures from Breaking Bad’s drug wars to the courtroom showdown between Jimmy and his brother Chuck. The seeds of both were planted in the finale of Season Two, with Mike’s Gus-aborted assassination attempt on Hector Salamanca and Jimmy’s felony confession at Chuck’s house. The resulting sense of momentum was powerful, no matter how long it took Mike Ehrmantraut to reassemble the bug in his gas cap.

But Mike’s dealings with his future boss Gus reached a head in episode four, the courtroom drama occupied episode five, and its aftermath ate up the half of episode six not occupied by the reintroduction of the soft-spoken gangster Nacho Varga as a major player. The task of episode seven, then, seems to be to relax, regroup, and reboot. It’s the first installment of the season that doesn’t feel like a drift downward into an inexorable hell.

Fittingly, Jimmy spends several of his scenes just killing time. As part of the deal that kept him from outright disbarment, he’s been sentenced to community service, picking up garbage for hours at a time. Since he’s forbidden from making phone calls to keep up his newfound side gig as a commercial producer, as he learns to his outrage when his four hours of time served are reduced to 30 minutes by the supervisor who saw him chatting away most of the time, every second is a wasted opportunity.

Things aren’t going much better for Jimmy when he’s off the clock, either. The commercial “business” he operates under his Saul Goodman guise is a frantic daily scramble not just to shoot, cut, and air the advertisements, but to find clients and convince them of the value of airing commercials at all. Like Breaking Bad before it, Better Call Saul captures a certain strip-mall ambience better than just about any other show on television, and watching Jimmy and his crew of comic-relief college kids stumble their way through the carcass of capitalism is a thoroughly dispiriting affair.

Things seem to be going better for Mike, or at least they would if you didn’t know where this was all headed. He’s easing his conscience over his involvement with Gus and Hector by donating his money and his time to building a new playground at his granddaughter’s church. Here, under the approving eye of his daughter-in-law Stacy, he strikes up a friendship with a fellow member of the church’s grief-recovery group, played by Law & Order: SVU vet Tamara Tunie. She’s mourning a husband who disappeared while hiking, and Mike appears intent on getting her some kind of closure—at least, that seems to be the reason why he accepts a job doing security for the nebbishy pharmaceutical dweeb Nacho has approached to buy the heart-medication capsules needed to poison Hector. Always helpful, Mike gives Nacho advice on how to get away with it, but demands something unknown in return. To be continued.

The real action, however, comes through conversation. (Sorry, Elvis.) In three separate scenes, Kim, Jimmy, or a combination thereof come close to pouring their hearts out. Meeting with Paige, the friendly representative of Mesa Verde bank, Kim snaps at her over nothing because the woman’s enthusiasm for Kim and Jimmy’s victory over Chuck (“You destroyed him!”) rubs her the wrong way. After apologizing, she explains: “All we did was tear down a sick man.” She leaves out the part where the sick man was 100% correct about Jimmy, of course.

Later, Jimmy takes Kim out to dinner to lift her spirits, and they play their usual game of eyeing patrons and figuring out how best to scam them—y’know, just for fun. But when Jimmy sees a customer berating a waiter over a drink order, he really turns on the malice, plotting a way to use Kim as a honeytrap to milk him dry. Kim has to ask to make sure he’s not serious about running the con, then makes the mistake of bringing up her reservations about Chuck. Jimmy’s anger is so obvious they both just wordlessly agree to drop it and go back to the game. But there’s no fun in it. Why would there be?

Finally, Jimmy takes a trip in person to the insurance agency that handles his malpractice policy—now a waste of money since he can’t practice at all, mal- or otherwise. He learns not only that the policy can’t be canceled or put on hold, but that when he returns to practice his premiums will go up by half. When he starts crying, you half-believe it—after all, his failure to make ends meet has weighed on him all episode long. But soon it’s obvious that it’s all a sham, a way to let the insurance agent, whose company handles Chuck’s insurance as well, that he’s mentally ill and prone to breakdowns on the stand. After making his apologetic goodbyes, Jimmy instantly shuts off the waterworks, a look of pure hatred on his face as he leaves the office. If he’s going down, then by god he’s taking Chuck with him. One day soon, he’s gonna meet a man who could understand that impulse, no question. 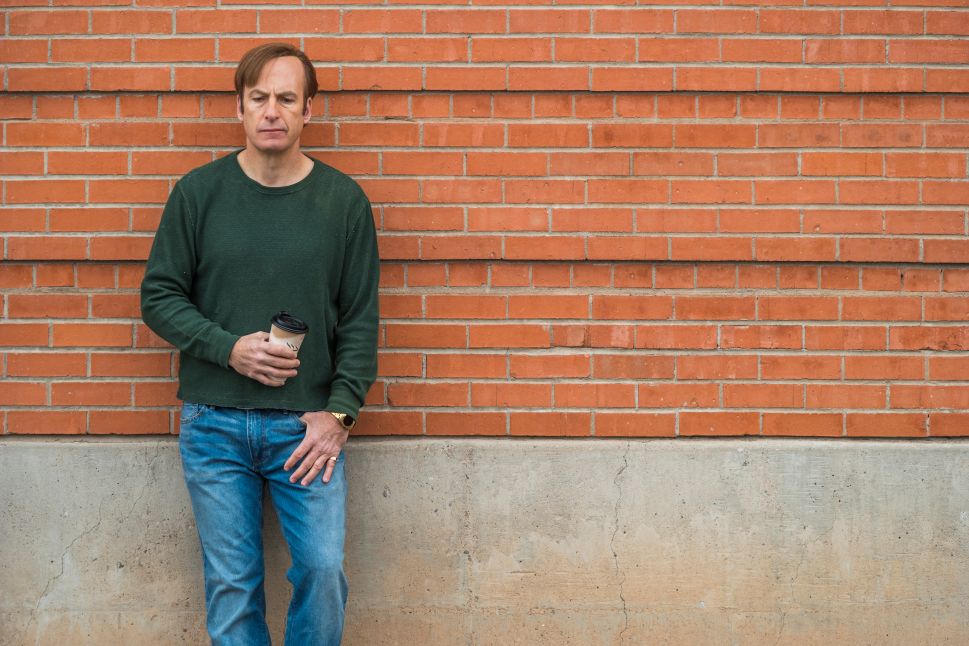